Home>Governor>California’s Renewables Mandate Sets an Impossible Example for the World
14 Feb 2019 2:03 am

“We will never waver on achieving the nation’s most ambitious clean energy goals.”

California has long been proclaiming itself the leader in fighting “climate change,” and incoming governor Gavin Newsom promises to continue the efforts. The big push began over ten years ago, with Gov. Schwarzenegger, who pivoted left after failing to reform public employee unions in 2005. Schwarzenegger promoted and then signed, AB 32, in 2006. This so-called “Global Warming Solutions Act” set the initial targets for greenhouse gas reduction, empowering the California Air Resources Board to monitor and enforce compliance with laws and regulations aimed at achieving these reductions.

Other significant legislation followed. SB 107, also passed in 2006, mandated a “renewable portfolio standard,” wherein by 2010 at least 20% of California’s electricity would come from renewable sources.

The legislation has been unrelenting. SB 1, 2006, mandated utilities pay rebates to homeowners that installed photovoltaic panels on their roofs. AB 118, 2007, funded the “Alternative and Renewable Fuel and Vehicle Technology Program,” the first step towards mandating a minimum percentage of electric and hybrid vehicle sales. SB 375, 2008, the “Sustainable Communities and Climate Protection Act,” directed cities and counties to increase the housing density of their communities.

This is just a partial list. High speed rail, water rationing, “urban containment” policies, a virtual prohibition on any conventional energy development, retrofit mandates for trucks and dwellings, and much more – all of it has come down from Sacramento in an attempt to “address climate change.”

But will any of this work? Is California setting an example that the world can follow?

The short answer is no. Renewables alone cannot possibly power the global economy. Using data on energy from the BP Statistical Review of World Energy, along with population data from the World Bank, the following graphics make this clear.

Most people would agree that access to cheap energy is a prerequisite for economic development, which in turn sets in motion a cascade of positive effects on societies – individual empowerment, female emancipation, access to clean water, healthcare, education, reduced infant mortality, fewer infectious diseases.

If one accepts that argument, the next chart projects how much more energy needs to be produced worldwide to achieve these positive economic benefits, and the positive effects that would follow from more abundant and affordable energy worldwide. A primary assumption is that Americans become somewhat more efficient in their use of energy, with their per capita KGO/year consumption declining from the 2017 average of 6,898 to 5,000 by 2035. The other related assumption is that the people living in the rest of the world increase their energy consumption from the 2017 average of 1,561/year up to 2,500/year by 2035, which would still only be one-half as much per capita as Americans would be consuming.

Based on these assumptions regarding individual energy consumption trends, as can be seen on the above chart, total global energy production will need to increase by 71 percent, from 13.5 billion metric tons of oil equivalents in 2017, to 23.1 per year in 2035. This is based on World Bank projections for 2035 that estimate the US population at 355 million and estimate the total world population increasing to 8.9 billion.

Can windmills and solar panels make that happen? They’ll have a long way to go. The next chart, courtesy of BP’s most recent Statistical Energy Review, shows the fuel mix of global energy production today. 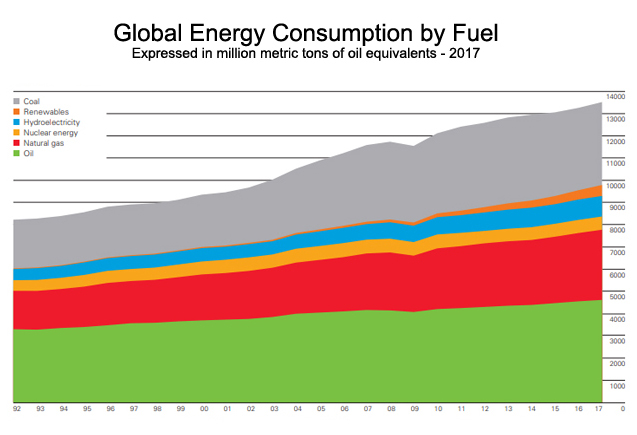 It’s hard to even find the renewable slice on this graphic that shows global energy production by type for the last 25 years. On the right, where the 2017 mix is depicted, renewables are the minute orange slice, just below coal (grey), and hydroelectric (blue). As is obvious, coal, natural gas (red), and oil (green), constitute the overwhelming majority of energy produced in the world.

It is difficult to imagine 50 percent of this chart to be represented by renewables by 2035, when even under minimal scenarios to provide adequate energy for economic development, global energy production needs to double. But how green are renewables?

To answer this, an unlikely source provides an illuminating perspective. From the website of the “Deep Green Resistance,” a critique of green and renewable power is offered with a lucidity that eludes California’s policymakers. If the “deniers” of the right have no credibility with California’s green movement, perhaps the deep greens do. Consider these excerpts from the Deep Green Resistance website’s “Green Technology & Renewable Energy” FAQs:

It’s debatable whether some ‘renewables’ even produce net energy. The amount of energy used in the mining, manufacturing, research and development, transport, installation, maintenance, grid connection, and disposal of wind turbines and solar panels may be more than they ever produce.

What about solar power?

Solar panel production is now among the leading sources of hexafluoroethane, nitrogen triflouride, and sulfur hexaflouride, three extremely potent greenhouse gases which are used for cleaning plasma production equipment. As a greenhouse gas, hexaflouroethane is 12,000 times more potent than CO2, is 100% manufactured by humans, and survives 10,000 years once released into the atmosphere. Nitrogen Triflouride is 17,000 times more virulent than CO2, and Sulfur Hexaflouride is 25,000 times more powerful than CO2. Concentrations of nitrogen triflouride in the atmosphere are rising 11% per year.

What about wind power?

One of the most common wind turbines in the world is a 1.5 megawatt design produced by General Electric. The nacelle weighs 56 tons, the tower 71 tons, and the blades 36 tons. A single such turbine requires over 100 tons of steel. This model is a smaller design by modern standards. The latest industrial turbines stand over 600 feet tall and require about eight times as much steel, copper, and aluminum.

What about hybrid and electric vehicles?

The production of electric cars requires energy from fossil fuels for most aspects of their production and distribution. This requirement is perhaps even more extreme with electric cars as there is a need to manufacture them to be as lightweight as possible, due to the weight of the battery packs. Many lightweight materials utilized are extremely energy intensive to produce, such as aluminum and carbon composites. Electric/hybrid cars are also charged by energy that, for the most part, comes from power plants using natural gas, coal or nuclear fuels. A recent study by the National Academies, which analyzed the effects of vehicle construction, fuel extraction, refining, emissions, and other factors, has shown that the lifetime health and environmental impacts of electric vehicles are actually greater than those of gasoline-powered cars.”

These are tough assertions. Not included here is the environmental footprint for literally gigawatt-years of storage capacity, not only to deliver continuous energy on windless nights, but, even more daunting, in winter when there are far fewer hours of sunlight. Most of what the Deep Green Resistance advocates may be considered dangerous extremism, but their assessment of renewable energy is cannot be ignored.

Renewables are not necessarily “greener” than conventional energy, particularly if conventional energy is produced using the cleanest technologies available. If the all the governments on earth enforced on their peoples the experiment that California is committed to – 50% renewable energy by 2030 – the likely result would be the collapse of civilization that the deep greens not only predict, but wish to hasten.

An “all-of-the-above” energy strategy is the only way to offer humanity the possibility of peaceful economic development.

Back in the 1990s, when environmentalism had not yet matured into the polarizing climate change bogeyman that it has become, one of the most reputable environmentalist journals was produced by the WorldWatch Institute. Back then, they consistently advocated “methane” (natural gas) as the “transitional fuel” to power the global economy until breakthrough technologies such as fusion power or satellite solar power stations became commercially viable. More recently, environmental activists such as Greenpeace co-founder Patrick Moore have advocated nuclear power as an essential part of our global energy future.

There is no place on earth more capable of developing clean fossil fuel and nuclear power than California. Californians have a choice. They can impoverish their population by creating artificial scarcity of land, energy and water, enforcing draconian restrictions on all development in the name of fighting climate change. Or they can face reality, and become pioneering partners in a new age of clean energy development from all sources. That would set a viable example for the world to follow.