Home>Governor>Gov. Newsom Appoints Leaders of Cities Overrun With Homeless to New Homeless Commission
22 May 2019 2:05 am

Residents of California’s largest cities are experiencing huge homeless populations with derelict RVs with raw sewage leaking, illegal camps in parks and on streets, human vomit, urine and defecation on city sidewalks and in the doorways of businesses, used needles strewn about, homeless sleeping in doorways and bushes, confrontations, sexual deviancy, and physical attacks.

Point-in-time homeless counts are mandated every two years by the U.S. Department of Housing and Urban Development, and impact the federal funds going to the state and counties. The media claims “the results have strong influence on local spending and policy decisions.” I’ve spoken to police assigned to deal with homeless populations who say the counts are inaccurate at best because there is no way to really count the homeless. They say (as do others involved) that cities and counties do not want to eradicate homelessness… because the federal funding would dry up. 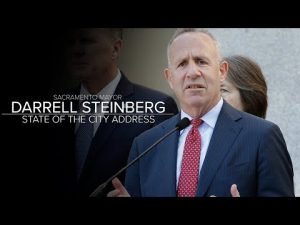 Fresh from the State Legislature, in 2016, as Sacramento’s new Mayor, former State Senator Pro Tem Darrell Steinberg, announced his plans for making homelessness in Sacramento his priority, through more spending.

At one point in 2016, the Sacramento City Council unanimously authorized spending $300,000 on taxpayer-funded portable toilet trailers, June through December 2016. The City also hired two full-time employees to serve as “attendants” for the three toilet stalls, all air-conditioned, for the homeless, at a cost to the taxpayer of $11.00 per flush.

Residents were livid as this took place blocks from an elementary school in broad daylight, and next to a home. He was seen several times in the following days with his pants down, exposing himself. Anyone else would have been arrested as a sex offender. Residents still want to know why police did not keep the guy locked up under sex offender guidelines.

“No Californian can say homelessness is someone else’s problem – it affects us all,” said Governor Newsom. “Homelessness is a matter of statewide concern, but solutions will come from the local level. Mayors, county supervisors and city councils around the state are working hard to reduce homelessness and its underlying causes. We’ll be watching these local and regional solutions closely, to lend a hand and help them scale.”

Notably, “The Task Force will deliver at least one annual report to the Governor on the work it performed to guide the creation of joint regional plans to address homelessness, including highlighting best practices and model programs at the local level.”

The Governor and Mayors of the largest cities all say that the burden of solving the city’s street problems is everyone’s responsibility. “The responsibility is with everyone,” San Francisco Mayor London Breed said in a San Francisco Chronicle article about homeless pooping all over the city. “People shouldn’t be comfortable throwing their trash on the ground,” she said, as if everyone does this, and not just the homeless.

The Governor did not post any photos of Oakland and his meeting, which was probably a good idea. Oakland is so overrun with homeless, trash, filth, rats and drug garbage, it, along with San Francisco, was named in a United Nations  report on homeless encampments. 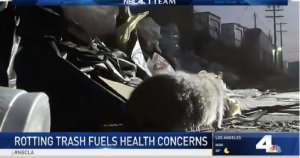 Just last year a United Nations expert on housing singled out Oakland and San Francisco in a report as the only two U.S. cities which are part of a “global scandal,” saying the homeless encampments are “cruel and inhumane,” after visiting the Bay Area in January, KTVU Fox reported. In the same report the Special Rapporteur says “residents of informal settlements affirm humanity in the most inhumane circumstances. The Special Rapporteur has visited many informal settlements in the global North and South. She has found the severity of the living conditions and the failure of States to respond to them profoundly disturbing.”  And, “In a large informal settlement in Mumbai, India, the Rapporteur saw a rodent infestation caused by a lack of waste removal.”

With rat infestations living in homeless encampments and within large piles of trash, just as the UN housing expert saw in Mumbai, this is also the case in California’s largest cities, as this NBC Los Angeles report shows.

A recent report found that Los Angeles spent $619 million last year on the homeless crisis, but have little to show for it, as we reported in California Globe recently.

Gov. Gavin Newsom has authorized the state to spend $1 billion, and LA county and city governments collectively spend more than $1 billion annually on the costs of dealing with the growing homeless population. Thus far, spending billions on the homeless in California has largely increased the population to 134,000 homeless people, amounting to one-quarter of the nation’s total homeless population.