Gov. Gavin Newsom has proposed a tax on drinking water throughout the state to help poor communities in California deal with contaminated water systems. 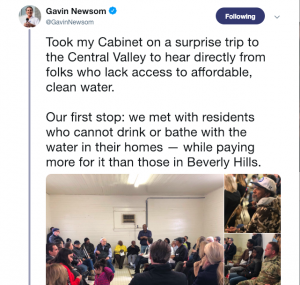 Newsom’s plan to establish a “safe and affordable drinking water fund” is in his budget proposal, presented Thursday. A bill proposing a drinking water tax was introduced last year, but was killed during the committee process under threat of a veto by Gov. Jerry Brown.

Newsom is proposing to spend $25 million for the “Safe and Affordable Drinking Water Fund.” Despite a $15 billion state surplus, who and how California’s water will be taxed is not yet known.

Friday, Newsom took his staff on a field trip to the Central Valley to talk to residents who lack clean drinking water.

Yet for several years, Assemblyman Devon Mathis (R-Porterville) tried to get his colleagues in the Legislature to pass legislation to fund clean drinking water for the 10,000 poor constituents in his district reliant on groundwater wells which wells went dry in the drought.

The city of East Porterville in Tulare County has had tens of thousands of poor and low-income residents go without drinking water for the many years due to the recent drought, and exacerbated by lack of infrastructure, and dry and contaminated wells.

Matthis tried again with AB 1588 which expanded access to the funds to not only homeowners but renters too. Sen. Lara put AB 1588 on the suspense file in its first hearing in the Senate Appropriations committee, claiming the total $10 million cost was too great. It finally passed the Appropriations committee, and Gov. Jerry Brown signed the bill in 2016 providing $15 million in loans and grants to homeowners to deepen dry wells.

“We met with residents who cannot drink or bathe with the water in their homes — while paying more for it than those in Beverly Hills,” the governor tweeted.

The Association of California Water Agencies weighed in, unsure of the water tax. “ACWA believes that making access to safe drinking water for all Californians should be a top priority for the State,” said Association of California Water Agencies Deputy Executive Director Cindy Tuck. “However, a statewide water tax is highly problematic and is not necessary when alternative funding solutions exist and the state has a huge budget surplus.”

Tuck said the ACWA prefers to work with Gov. Newsom, the Legislature and other stakeholders on a solution that does not impose a statewide water tax.

“To the surprise of absolutely no one, California’s new governor has proposed a state budget with billions in increased spending and lots of tax hikes,” said Jon Coupal, President of the Howard Jarvis Taxpayers Association. Coupal noted the state’s $14.8 billion budget surplus, and called the proposed tax an example of  “California’s knee-jerk reaction to default to a new tax whenever there’s a new problem.”