At least one-third of the largest newspapers across the United States experienced layoffs between January 2017 and April 2018, according to the Pew Research Center.

Monday, reports of MNG Enterprises, backed by a New York hedge-fund, announced it made an offer to buy USA Today publisher Gannett. MNG is commonly known as Digital First Media.

Digital First Media owns more than 50 newspapers with 30 in California. 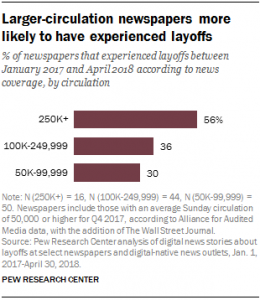 The Wall Street Journal reported Sunday that MNG Enterprises, a major U.S. newspaper chain owner backed by a New York hedge-fund Alden Global Capital, was preparing to make an offer to purchase Gannett. “Digital First is known for its contentious history with the newspaper industry in part because of its penchant for slashing costs,” the WSJ wrote.

“Better known as Digital First Media, MNG Enterprises is backed by hedge fund Alden Global Capital and is the publisher of the Denver Post and San Jose Mercury News,” CNBC reported. “Gannett, which owns newspapers and websites across the United States, has been doing its best to transition away from legacy newsprint to digital subscriptions.”

Gannett has lost more than 40 percent of its value over the last two years, YahooFinance reported.

Since acquiring Colorado’s Denver Post, the editorial staff has had a publicly contentious relationship with Digital First. Staff claimed editorial interference, censorship, and outrage over significant cuts to the staff.

The group already owns nearly five dozen daily newspapers across the country, including the Denver Post and the Boston Herald.

Digital Media First has a reputation for dramatic budget cuts, especially on the editorial side. As mentioned in the California Globe’s sister site, New Jersey Globe, which covers a state similarly served by a number of Gannett papers, “cost-cutting at the Denver Post was so severe under DMG that the paper’s editorial page editor, Chuck Plunkett, wrote an editorial in his own paper calling on the owners to sell it; he resigned under pressure a month later.”

The president of Alden Global Capital, Heath Freeman, 39, grew up in Short Hills, New Jersey, a tony suburb of New York that is home to one of the highest-grossing shopping malls in the world. Despite the free spending taking place at the Louis Vuitton and Neiman Marcus stores near his hometown, Freeman has earned a reputation for penuriousness.

Bloomberg columnist Joe Nocera called him the “Gordon Gekko of news empires” and the Chicago Tribune wrote that “[Freeman’s] layoffs aren’t just painful. They are savage.” He was described in the Denver Post as “a man who has no real affinity for newspapers.”

The impact on local news coverage in California, which has already shriveled amid constant layoffs and cuts to editorial budgets, will surely be felt across the towns that currently rely on Gannett papers.

The proposed bid was first reported on Sunday by the Wall Street Journal.