Jane Fonda was a progressive icon back when it wasn’t quite so acceptable to be unabashedly left-wing.

While candidates running in Democratic primaries in some parts of the country might have sought out her support, there was little chance that a campaign contribution from ‘Hanoi Jane’ – conservatives raised millions calling her that after she was photographed on a North Vietnamese anti-aircraft gun during the re-election of Orange County’s Richard Nixon – would be welcomed by a presidential candidate.

Now, with a field of candidates pushing each other to get left, Fonda. 81, seems to have found a preferred candidate who is hugging the middle.

Fonda wrote a personal check to the presidential campaign of Sen. Amy Klobuchar, the Minnesota Democrat who looks like a moderate in the race for the 2020 presidential nomination. From her home in Atlanta, the winner of two Academy Awards, two BAFTAs, and four Golden Globe Awards contributed $1000 to the Minnesotan.

The actress contributed to Hillary Clinton in 2016 and Barack Obama in 2008.  She’s given about $295,000 to Democratic federal candidates over the last 20 years, including Kamala Harris’ U.S. Senate race.

Fonda has never run for office, although she did campaign statewide in California once.

In 1976, she was married to anti-war activist and Chicago Seven defendant Tom Hayden when he challenged incumbent U.S. Senator John Tunney in the Democratic primary.  Hayden lost by 564,242 votes (54%-37%). 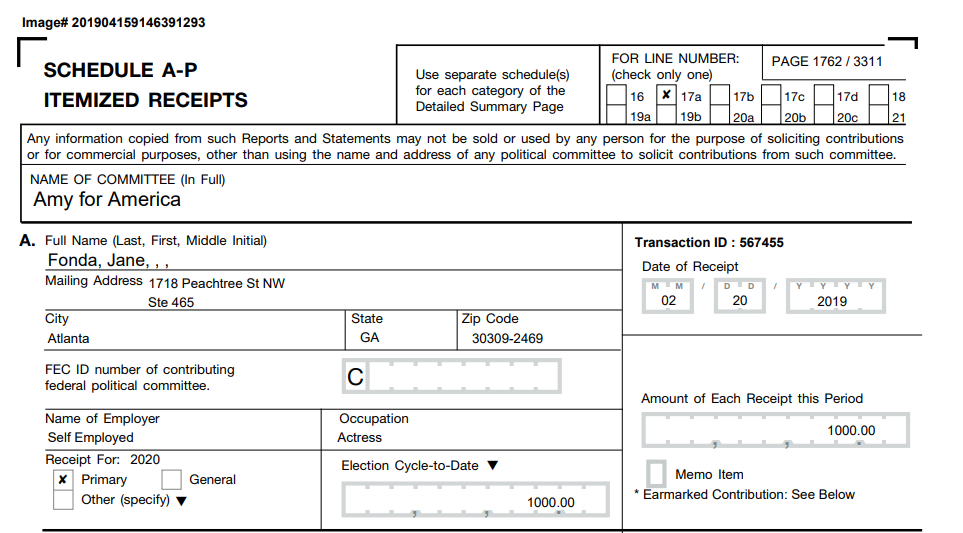 California Globe
An independent, professional news website obsessively chronicling everything political throughout the state of California.

Latest posts by California Globe (see all)
Spread the news: