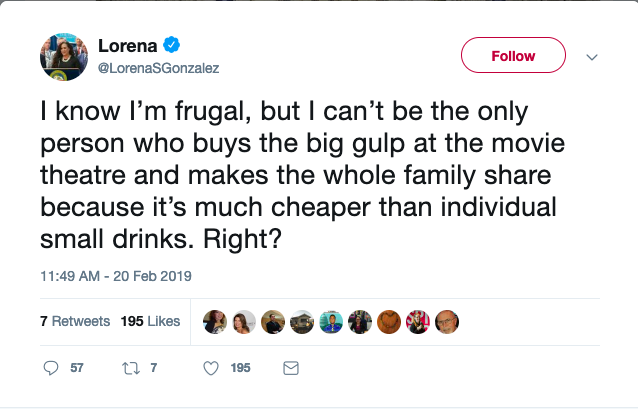 In January, the 9th Circuit found that requiring health warnings on advertisements for soda and other sugary drinks violates constitutionally protected commercial speech. “Beverage makers will likely succeed with their claims the warning labels infringe their free-speech rights, and the trial court had an obligation to preliminary block the ordinance as a result, Courthouse News reported. An 11-judge 9th Circuit panel kicked the case back down to trial court, and ordered a second look at blocking a San Francisco ordinance requiring warning labels on billboard ads for sugary drinks.

One of the new bills, AB 766, authored by Assemblyman David Chiu (D-San Francisco), would bar restaurants from selling soda in cups larger than 16 ounces, including self-service soda fountains at fast food chain restaurants, convenience stores such as 7-Eleven (home of the Big Gulp), gas station convenience stores, and sports arenas.

Another bill authored by Assemblyman Richard Bloom (D-Santa Monica) would impose a fee on sodas. Bloom has proposed two previous bills to impose a fee on sodas, “to help offset the cost to the healthcare system of sugar-related problems, including an increase in diabetes among young people.”

“Big Soda has profited off of life-threatening disease and suffering for too long,” said Assemblyman Chiu, who introduced the bill to ban supersized sodas like the Big Gulp. “California is taking common sense measures that shed light on the predatory practices of Big Soda and help consumers make healthier choices.”

“The soda industry is the new tobacco industry,” said Chiu. “This is an industry that has used marketing and sales tactics to victimize low income communities, communities of color throughout our country.”

Assemblyman James Gallagher (R-Chico) said Democrats want the new tax funds “to pay for new programs that don’t work, but it will help feed the coffers of government.”

Assembly Republicans issued their own statement arguing that Democrats are attempting to impose more taxes and regulations:

“Proving they’ve never seen a tax or regulation they don’t like, Capitol Democrats are pushing a radical plan to dictate people’s drink choices. They want to ban the Big Gulp, tax the tasty and clear the checkout aisle of drinks they don’t like.

We get it, too much sugar isn’t great for you. But what’s next – criminalizing pizzas over 18 inches? A Dorito tax? Only one squirt of butter on your movie theater popcorn? A fine for not eating your broccoli?

“While Sacramento politicians celebrate this plan over glasses of organic cold-pressed kale juice, Assembly Republicans think Californians should be treated like adults.”

Gallagher explained there was a ballot initiative last year that had already qualified for the ballot, sponsored by the beverage industry and the California Roundtable which would have required a two-thirds vote approval for all local taxes. “The Democrats panicked, and struck a deal between the beverage association and Democratic leadership which says local governments can’t tax groceries, and that includes sodas,” Gallagher said. In exchange, the ballot initiative was removed from the ballot. “Then a bill goes to the floor banning taxes on groceries.” Gallagher said most of the Democrats begrudgingly voted for the bill, but vowed that they would bring back a bill banning and taxing sodas on a statewide basis. “The lesson here?” Gallagher asked. “Never do deals with Democrats.”

Gallagher said this package of bills “is all a charade, and does nothing to stop unhealthy lifestyles.”

Ironically, Assemblywoman Lorena Gonzalez (D-San Diego) posted a hilarious Tweet which resonated with many: “I know I’m frugal, but I can’t be the only person who buys the big gulp at the movie theatre and makes the whole family share because it’s much cheaper than individual small drinks. Right?”

“Other bills proposed Wednesday include a reintroduction of a measure that failed last year to require health warnings on cans and bottles of suger-sweetened drinks, and one that would bar the soda industry from offering subsidies including discount coupons that encourage soda consumption,” the Los Angeles Times reported. “Health groups have also proposed an initiative for the 2020 ballot that would tax sodas at 2 cents per fluid ounce.”