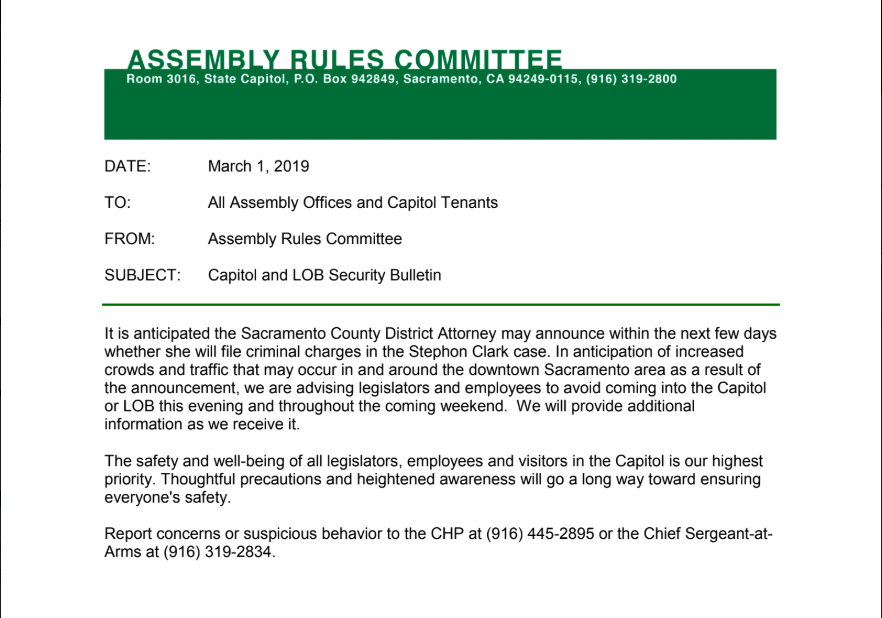 UPDATED below: Friday afternoon, the California Assembly and Senate sent out notices to all Capitol staff warning that Sacramento County District Attorney was expected to announce within the next few days whether she will file criminal charges in the Stephon Clark case.

They have good cause to be concerned about well-orchestrated rioting and violence.

Nearly one year ago Clark was shot and killed by Sacramento police following a 9-1-1 call about someone breaking windows with a crowbar, and trying to open the windows of several homes. He ran and ended up in his grandmother’s South Sacramento backyard, followed by police officers who believed he was pointing a gun at them. They did not know the home belonged to his grandmother. Police footage shows the exchange took only 10 seconds, when officers fired 20 shots, hitting Clark multiple times, police told CNN affiliate KOVR. Clark was holding a cell phone.

“In anticipation of increased crowds and traffic that may occur in and around the downtown Sacramento area as a result of the announcement, we are advising legislators and employees to avoid coming into the Capitol or LOB this evening and throughout the coming weekend,” the Assembly memo said. “We will provide additional information as we receive it.”

Shortly after the shooting of Clark, his brother, Stevante Clark, interrupted a Sacramento council meeting, took ahold of the microphone to verbally attack the Sacramento cops who shot his brother, and jumped on the Mayor’s desk to yell in his face. This happened as the Mayor looked stunned, and police looked on.

“The safety and well-being of all legislators, employees and visitors in the Capitol is our highest priority,” the Assembly memo said. “Thoughtful precautions and heightened awareness will go a long way toward ensuring everyone’s safety.”

Simultaneously, while Stephon Clark’s brother was disrupting the city council meeting, hundreds of Black Lives Matter protesters, frustrated at not being able to get inside the council meeting, blocked the entrance of nearby Golden 1 Center in downtown Sacramento for the second time in one week, preventing thousands of ticket-holding Kings fans from attending the NBA game.

“You ain’t seeing no game tonight. Join us or go home!” protesters shouted at the Kings fans, the Sacramento Bee reported. Police did not break up the crowds.

The Sacramento Police Department released the videos of the shooting of Clark  less than 72 hours after the incident. Mayor Darrell Steinberg wrote in a statement that he “viewed the videos carefully” and that, “based on the videos alone, I cannot second guess the split-second decisions of our officers and I’m not going to do that.” 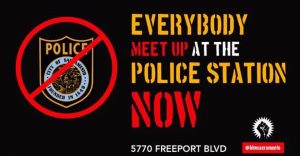 Sacramento District Attorney Anne Marie Schubert announced Saturday that the shooting of Stephon Clark by Sacramento police “was lawful and no charges will be filed.”

Immediately after the announcement, Black Lives Matter posted on Facebook and Instagram for members to meet at the Sacramento police station.