Tuesday’s midterm election brought out an unprecedented 113 million voters. That’s 49 percent of eligible voters, higher than any midterm in the last three decades.

In California, as in some other states, several races are very tight and every vote rolling in from mail-in ballots could sway these elections.

That’s not the case for California’s twelve ballot propositions. There were no surprises, and every decision fell in line with the pre-election poll predictions.

This proposition, also known as the Veterans and Affordable Housing Bond, won with over 54 percent of the vote. The bond will pour $4 billion into addressing California’s lack of affordable housing.

Only a quarter of that amount will go to home ownerships programs for veterans. The programs include down payment assistance and below-market mortgages rates.

Most of the money, $1.5 billion, will go to county governments and non-profit developers to build low-income housing. The remainder will go to programs for creating and rehabilitating high-density affordable housing throughout California.

Prop 2 won by an even bigger margin, getting slightly over 60 percent of the vote. It’s no surprise that this measure won with such a large margin. Homelessness among the mentally ill has become a major crisis in most larger cities in California, with tent cities popping up under every overpass and bridge. In Los Angeles it’s also a health crisis, with rates of typhus spiking to unprecedented levels in Los Angeles and surrounding areas. Andy Bales, CEO of the Union Rescue Mission, said in a Los Angeles Times article, “The conditions on Skid Row are ripe for even more serious issues than this.”

Prop 2 fixes problems with the previously approved ”Mental Health Services Act” in 2004. A lawsuit challenged the “No Place Like Home” plan to spend $2 billion dollars on housing instead of other services for the mentally ill. This proposition made that lawsuit moot.

Advocates for the mentally ill agree that stable housing is an important part reducing the stress that can exacerbate their client’s illness.

Voters refused by 52 percent to 48 percent to issue $8.877 billion dollars in general obligation bonds. This might seems a strange outcome in our perennially water-starved state but voters may have been swayed by the arguments laid out in an LA Times editorial arguing that these taxpayer funds would go to benefit private and regional interests who should be bearing those costs themselves.

This was another largely popular proposition, pulling in almost 61 percent support. It authorizes the sale of $1.5 billion in general obligation bonds for construction, equipping and repair of children’s hospitals throughout the state. Repayment will cost the state about $80 million a year for 35 years.

Voters decided not to allow seniors, the severely disabled and victims of natural disaster to keep their previous property tax assessment if they move to a new home. California’s Prop 13 limits property tax increases to 2 percent a year. A reassessment to current market value is done when a new property is purchased but this measure would protect these groups from that increase. It lost with just 42 percent supporting the measure to 58 percent against.

Opponents say the blow to the local tax base would be a burden to  schools and other services. 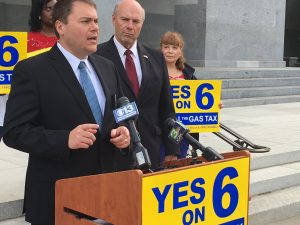 This stood out as one of the most politically divisive initiatives. Critics accused the measure’s supporters of getting most of their funding from Republicans outside of California to help bring more conservative voters to the polls. The “Yes on Prop 6” campaign countered with a threat to recall Attorney General Xavier Becerra for giving the proposition a deliberately confusing title. Despite the fact California’s gas fees and taxes drive the cost of filling up at the pump to one of the highest rates in the country, voters did not go for the repeal. It lost with 55 percent of votes going against the prop to 45 percent supporting.

Whether that is because voters were convinced the money is necessary to fix the state’s crumbling infrastructure or, as its supporters contend, voters were confused by the ballot’s name and the need to vote “yes” to eliminate the tax, the state will continue to get its current transportation funding.

Another proposition that got around 60 percent voter approval. Although the Act will take several more steps before it becomes a reality, the California Assemblyman behind the prop, Kansen Chu of San Jose, said he plans to introduce a bill as soon as the state legislature is in session. If Congress approves California’s plan, the change could take place as early as spring of 2019.

But that’s a pretty big “if.” Florida tried a similar change in July but Congress failed to take action, so the state had to change its clocks again this year.

A record-breaking $111.4 million was spent by the dialysis industry to persuade voters to reject new regulations that would limit their profits. And it paid off. The healthcare worker’s unions that supported the measure spent only $20.4 million. Supporters failed to make the case that the proposition would result in needed improvement in patient care, and it lost by a sizable 23 percent.

Though arguments on both sides emphasized the impact on patients, some say the underlying issue in this battle was unionization.

This proposal to split the state into California, Northern California and Southern California was blocked from the ballot in July by the order of the state’s Supreme Court, which wrote “Significant questions have been raised regarding the proposition’s validity.”

This is the other proposition that inspired spending huge wads of cash. Opponents threw $75.4 million at the effort defeat the measure while supporters spent just $25.9 million.

Although California voters approved other propositions that aim to help those caught up in spiraling housing costs, many were uncomfortable with repealing the Costa-Hawkins Rental Housing Act, even though this meant opening the door for greater local rent control regulations that are currently banned. The measure failed 61 percent to 38.

Rent control advocates are now looking at amending the Costa-Hawkins act, rather than an outright repeal. Newly elected Governor Gavin Newsom, who opposed Prop 10 because he thought it might hinder new housing construction, told the Sacramento Bee that he supports rent control and intends to take immediate action once in office to ease the soaring cost of housing.

This proposition was backed by American Medical Response, the state’s largest private ambulance service provider. The measure was created to head off a possible challenge to the current practice of requiring EMT and paramedics to be on call during their rest and meal breaks. Their ads convinced voters that their health and safety could be put at risk if this changed. It won 59 percent to 40 percent.

Security guards won a lawsuit in 2016 allowing them uninterrupted breaks and meal times; this measure was designed to head off a similar lawsuit for emergency medical personnel.

Proposition 12: The Prevention Of Cruelty To Farm Animals Act

This measure won by 61 percent. In 2008 California voters approved a proposition to set limits on pen and cage sizes. Those mandates went into effect in 2018, but with the overwhelming approval of Prop 12, new specific cage size requirements will have to be met by 2020.

The Humane Society supported this proposition and, not surprisingly, the egg and meat industry opposed the measure, saying it will result in shortages and increase expense for consumers.

Animal Right activists PETA also opposed Prop. 12, saying on their website “cage-free does not mean cruelty-free.” PETA says this proposition still allows tens of thousands of chickens to be jammed into huge warehouses and practices like beak cutting to continue.

Latest posts by Laura Hauther (see all)
Spread the news: