Thursday was a day of reckoning for Sacramento’s Black Lives Matter activists. Sacramento District Attorney Anne Marie Schubert was the guest speaker at a luncheon for the Women Lawyers of Sacramento, at a downtown restaurant, when her meeting was interrupted by BLM. 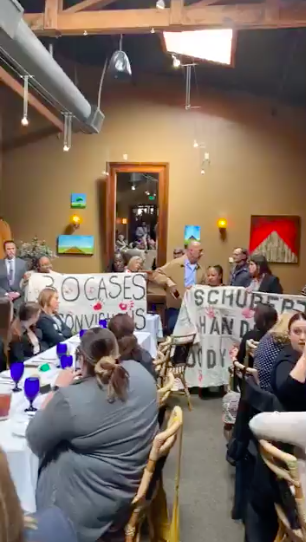 I received a text message from a friend telling me “Tonya Faison of BLM was just arrested for protesting Schubert’s lunch meeting!”

The BLM protestors invaded the private dining room at Lucca restaurant during the noon meeting Thursday.

“They were put in the back of the paddy wagon!” my friend reported.

“Hey Tanya, just so you know, when we’re done with this, I’d like to give you my card so when I finish my speech, maybe we can set up a time … so you can come down and we can talk about some of this stuff,” you can hear Schubert say to Tonya Faison in the video.

The Sacramento BLM chapter has been particularly vociferous about their displeasure of DA Schubert’s final decision to not charge the Sacramento police officers who killed Stephon Clark in March 2018, after reports of car and home break-ins in a South Sacramento neighborhood. Schubert also exposed that drugs were found in Clark’s system, he had a lengthy history of domestic abuse and violence, and his recent Internet searches on methods of suicide. Some suspected he wanted a death-by-cop incident.

On the one-year anniversary of Clark’s death, and the decision by the DA to not charge the police officers who shot and killed Clark, BLM protests closed Sacramento’s largest mall.

There was a four-hour protest at Sacramento Police Department headquarters after Schubert’s announcement, where several “Blue Lives Matter” flags were burned by demonstrators in the parking lot.

Nearly one year ago Clark was shot and killed by Sacramento police following a 9-1-1 call about someone breaking windows with a crowbar, and trying to open the windows of several homes, California Globe recently reported. He ran and ended up in his grandmother’s South Sacramento backyard, followed by police officers who believed he was pointing a gun at them. They did not know the home belonged to his grandmother. Police footage shows the exchange took only 10 seconds, when officers fired 20 shots, hitting Clark multiple times, police told CNN affiliate KOVR. Clark was holding a cell phone.

Stephon Clark was black. One of the Sacramento police officers who responded to the 9-1-1 call that night was also black. And the helicopter using night vision to follow Stephon Clark as he ran from police after breaking car windows and into homes, can’t tell what the ethnicity of a fleeing suspect is. The police only knew that the perpetrator was running from them after breaking into cars and attempting to break into houses using a crowbar. Stephon Clark did not stop as ordered, and that made him dangerous to everyone, and not just to the police.

The Sacramento Police Department released the videos of the shooting of Clark  less than 72 hours after the incident. Mayor Darrell Steinberg wrote in a statement that he “viewed the videos carefully” and that, “based on the videos alone, I cannot second guess the split-second decisions of our officers and I’m not going to do that.”

Yet BLM and the media continue to make this police shooting about race, despite that one of the police officers was also black. This isn’t just about race. The outcome would have been the same regardless of who was running and did not follow police orders. And if it was a white guy who was shot by police, the media would be silent.

UPDATE: I was just notified that Sacramento BLM is planning another protest this evening, at a local country club where the Carmichael Chamber of Commerce will be honoring DA Anne Marie Schubert. That’s Sacramento County Sheriff territory…