“I’m not speaking to The Hill anymore. Sorry,” California Democratic Rep. Jackie Speier said to a senior writer for The Hill late last week. Why won’t the California Congresswoman talk to The Hill anymore? Because the news publication employed reporter John Solomon, who’s coverage of Ukraine has been smashing.

“Rep. Jackie Speier upbraided a reporter for The Hill and ripped the outlet’s publication of columns by John Solomon, the conservative journalist whose work is at the center of what Yovanovitch described as a ‘smear campaign’ against her,” Politico reported.

Speier’s beef with John Solomon is that he reported in March that Obama’s Ukraine Ambassador, Marie Yovanovitch, had been caught bad-mouthing President Trump, and that she had provided Ukraine’s Prosecutor General Yuriy Lutsenko with a “do not prosecute list.”

Solomon is an old school reporter who tracks down witnesses, has a Rolodex of reliable sources, and is willing to dig through volumes of data and documents for the truth.

Solomon is also now being called a “Conservative” journalist, largely because his reporting is so damning to Democrats, and the only news outlets who have used and relied on his reports are Fox News, One America News,, and Conservative radio show hosts.

Solomon said in a statement to POLITICO: “I stand by each and every one of the columns that I wrote and that The Hill (both editors and lawyers) carefully vetted. All facts in those stories are substantiated to original source documents and statements.”

John Solomon is the textbook style reporter journalism schools used to hold up as the model… back when being a media watchdog meant ethical, fact-based, well-sourced and truthful reporting.

Politico reported Speier said it was “shocking” that The Hill “would have someone engaged in that paper that would conduct themselves in that manner and that he would be allowed to do so for as long as he has.”

State officials acknowledge US embassy in Kiev exerted pressure on Ukraine prosecutors not to pursue cases against two government officials who attacked Paul Manafort, a journalist aligned with George Soros and a nonprofit funded by Soros. Anyone see a pattern?

Now The Hill Editor in Chief Bob Cusack announced (below) that they were “reviewing” and “updating” Solomon’s columns – rewriting the news to please Rep. Jackie Speier?

John Solomon, who also worked at The Washington Post and The Associated Press, left The Hill in September. But last year, under pressure from Jackie Speier types, The Hill moved Solomon to the “Opinion” side, despite that his articles and reporting are not opinion. Solomon recently left The Hill and is now working at Fox News.

My favorite old journalist Robert Novak used to advise young reporters, “Don’t become too enamored of invitations to the White House or embassy parties.” He also said, “read the documents other journalists don’t.” John Solomon does.

Solomon also posted on his website The 15 essential questions for Marie Yovanovitch, America’s former ambassador to Ukraine, ahead of Yovanovitch’s testimony:

“After nearly two years of reporting on Ukraine issues, here are 15 questions I think could be most illuminating to every day Americans if the ambassador answered them,” Solomon wrote. I’ve posted the first five questions. If you want to read all 15, they are HERE. 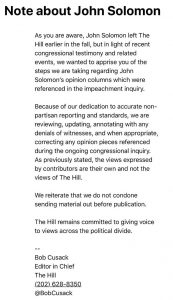 3 thoughts on “California Rep. Jackie Speier Berates The Hill Reporter John Solomon For Getting the Truth About Ukraine”