There’s no figure more popular among left-wing media than the Republican apostate. Self-identified Republicans who are willing to criticize Trump enjoyed a four year bonanza of bookings on CNN and MSNBC. And the most prized gets with these networks are weak sisters like Mick Mulvaney and Stephanie Grisham, one-time Trump insiders who saw the rewards that awaited them once they were willing to publicly renounce the policies they helped enact.

This phenomenon knows no limits. This week’s hysterical fever dream surrounding Liz Cheney is the best example. Even with a tidal wave of Democratic money and Democratic votes, she got beat 66-29 in her Republican primary in Wyoming. Yet, that thrashing has not discouraged completely unrealistic talk of her running for president. Exclusively among Democrats, naturally. The fact that Democrats would completely ignore their supposed convictions to support someone whose sole point of agreement with them is Trump hatred–Cheney is pro-gun, anti-abortion, and anti-tax—shows that the entirety of the Democratic agenda, even two years after the Trump Presidency, remains “Stop Donald Trump.”

It’s a bipartisan phenomenon. The left celebrates a Republican who renounces his former positions—a minor Colorado state senator becoming a Democrat somehow merited articles in the Guardian, NBC, the Washington Post and even People. So too Republicans love it when Democrats switch party, as when New Jersey Congressman Jeff Van Drew joined the GOP in 2019.

But one way the game is not equal is the demand for truth and respect for those who admit they’re wrong.

Democrats adore Republicans who apologize for having supported Trump. But a Democrat who says something completely untrue about Trump or his allies – I’m not talking about a two-year hoax like Russia collusion, which wasted countless billions of this nation’s capital, time, and goodwill, I’m talking about simple factual errors—is never held to account. Democrats are free to say whatever they like about Trump and his allies with zero consequences even when it’s provably false.

The philosopher Sam Harris just laid out the intellectual underpinnings for this thinking. Basically, it boils down to “by whatever means necessary.” Since Trump is Hitler, whatever you have to do, no matter how false, is justified by the harm Trump will surely cause if he’s ever re-elected.

Yes, that philosophy is insane, totalitarian, and disgusting. But at least Harris is honest about it.

Which brings us to perhaps the dumbest and most preening member of Congress, Representative Eric Swalwell.

On Monday, Jared Kushner’s new book, Breaking History, hit No. 1 on Amazon’s chart, which is updated on a constant basis. We’re not talking about those micro charts where a book can sell two copies and suddenly be No. 1  among books of Tibetan poetry. After Jared’s appearance on Mark Levin’s show Sunday night, Breaking History shot to No. 1 overall. Here’s a picture of that happening. 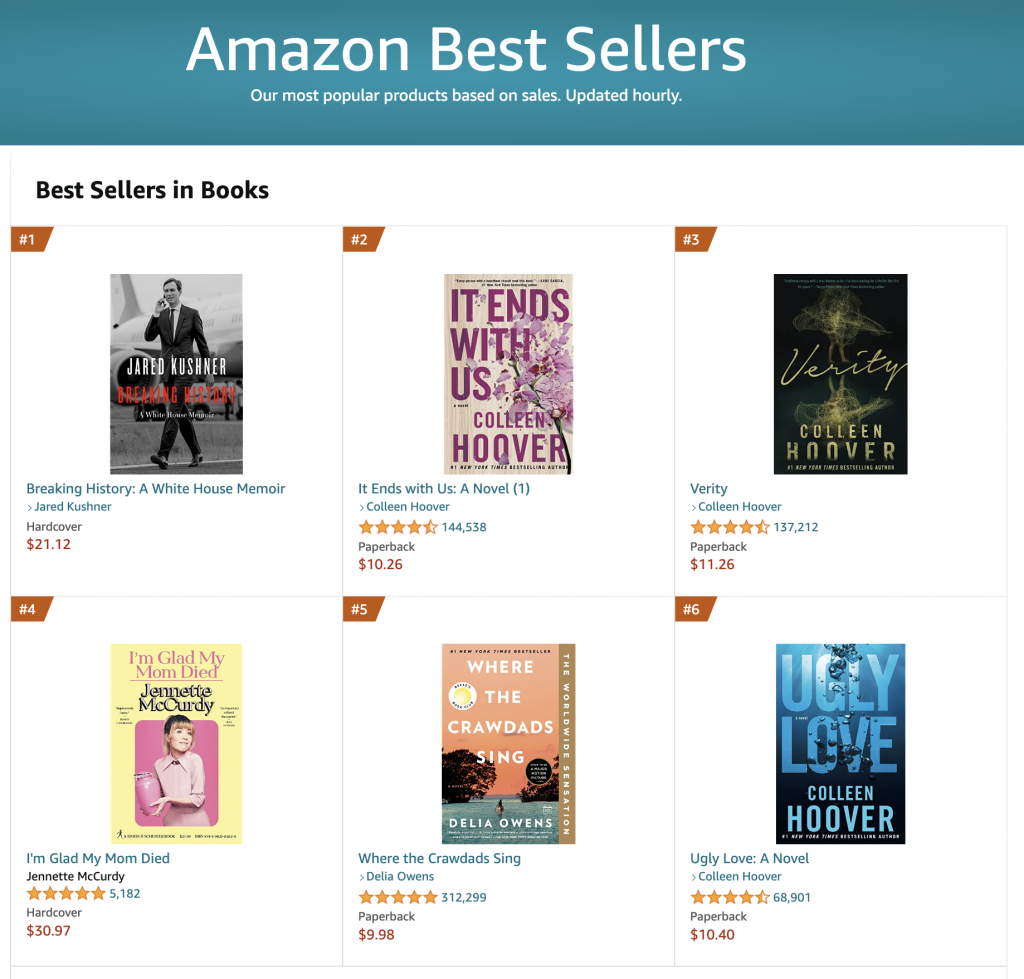 Ivanka Trump, ever the supportive wife, tweeted a nice message about her husband‘s achievement. “Breaking History is the No. 1 bestseller on Amazon! Grateful that Americans are excited to read @jaredkushner thrilling memoir of life in the Trump White House.”

Later in the day, YA romance phenom Colleen Hoover, who has already shown Meet the Beatles-like popularity by having four books in the New York Times top 10, shot back into the No. 1 position. Bear in mind that Hoover’s books are fiction and priced at less than half of Breaking History, but a book is a book in the Amazon universe and the overall list simply connotes which book of any kind is selling best.

At that moment, Eric Swalwell took a screenshot of Colleen Hoover in first and second and Jared in third, and leveled an accusation. Writing like the teen girl he clearly wishes he was, he tweeted, “LOLOLOLOLOLOL. They even lie about best sellers.”

Swalwell called Ivanka a liar for having said that Jared was No. 1 because at the exact moment he looked, Jared was number three. In fact, Ivanka had told the truth. It was Swalwell who was lying. By falsely accusing Ivanka of lying, Swalwell furthered shattered a credibility that has been obliterated since the moment it was discovered the member of the House Intelligence Committee had been seduced by sexy Chinese spy Christine Fang.

But this story isn’t really about Swalwell. He’s an idiot, but everyone has known that for many years. The story is more about the lack of honor among Trump opponents.

Where are the people who stand up and say, “OK, I dislike the guy as much as anybody, but there are enough real things he and his family have done wrong that we should hold accountable even our allies who tell falsehoods about him.” Is Sam Harris right? Does the end of destroying Trump justify any means, including just an obvious and silly lie about his daughter?

The media is as much to blame for this as the voters. When Jim Rutenberg wrote in the New York Times during the 2016 campaign that Trump was such a danger to the world that journalists had a moral obligation to stop trying to understand his appeal to half the country, the ugly fascist underbelly of the progressive movement was unleashed.

All last week, on the unwaveringly progressive Brian Lehrer Show on WNYC, the host took calls from voters of different generations about what issues were on their minds as New York heads to its midterm elections today.

The overwhelming answer was “concern for democracy.” But what was amazing was how time and again, the callers’ solutions were entirely anti-democratic. “We need to abolish these laws they put in place in Texas that make it harder to vote.” As in, the laws put in place by the democratically elected legislature. Other callers thought the only answer was to abolish the Supreme Court. Another fine example of people who do not believe in our Constitution fretting about the destruction of our democracy.

The message could hardly be more clear. The people who say they’re concerned about democracy only care to preserve it when it goes their way. Which I guess is true of both sides. But the lack of self-awareness—as Rep. Swalwell’s false and thus far uncorrected, un-retracted tweet proves—that’s mostly a Democratic thing.