Kuo spoke at a private gathering with fellow Republicans after the CAGOP 2019 Convention to discuss the history of a bill that thrust him into the political arena.  He informed his audience that although Senate Constitutional Amendment 5 was pulled, it remains part of the California Democrat Party Platform. 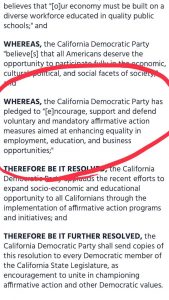 “You need to understand what politics can do to you. It can take away everything from you,” said Kuo. “The Democrats today are evil, they have the mindset of the Chinese government and North Korean leaders. They want to take us down that path.”

In the San Francisco Bay area, Kuo played a major role in fighting against SCA 5. A native of Taiwan, Kuo fled his home country as a child to seek freedom in the United States. When he heard that Chinese Americans could be blocked from attending college based on race he decided to run for State Senate in 2014.  “College admission should be based on merit not the race of a student,” Kuo said during his campaign race.

Kuo lost his bid for state senate but now is a watchdog for the Republicans so they are not blindsided. The support for affirmative action is stated on the Democrat Party Website. It not only supports affirmative action for education but for employment and business opportunities.

“The American dream is based on principles of hard work, persistence and achievement,” said Kuo. “Affirmative action doesn’t make sense in a competitive environment.”

However, in 2014 the nation’s most diverse state was grappling with how to boost the representation of minorities on college campuses.

California Civil Rights InitiativeThe author of SCA 5 was Democratic State Senator Ed Hernandez who believed affirmative action was the solution to increase minority enrollment. Hernandez said Prop. 209 was not the best prescription for the state and pointed out the U.S. Supreme Court upheld the right of universities to use race as a factor in determining college acceptance.

The bill was pulled before it reached the floor of the state Assembly by the unexpected rise of the Asian American Community as a political force against racial preference.

“The Democrats have a super mega majority in both houses. The only reason they pulled SCA 5 was that the Asian community rose up and fought back,” said Kuo.

At the federal level affirmative action was ruled constitutional by the Supreme Court but the Trump Administration continues to investigate the murky policies.

Roger Clegg, who worked in the the civil rights division under President Ronald Reagan, and President George Bush, is now the president of the conservative Center for Equal Opportunity, and welcomes the review of the practice of Affirmative Action. He said it is long overdue as the United States becomes increasingly multiracial.

“The civil rights laws were deliberately written to protect everyone from discrimination, and it is frequently the case that not only are whites discriminated against now, but frequently Asian-Americans are as well,” he said.

“The democrat party will not stop with education if they revive affirmative action. They will want to implement it in the workforce as well,” said Kuo. “Democrats have talked about requiring companies that employ over 50 people to hire based on meeting race quotas.”

Kuo’s warnings carry some merit. In 2018, Gov. Jerry Brown signed into law SB 826. This bill forces companies to hire by the end of 2019 at least one woman to sit on the board of directors, two women on a five person board and three women on a six person board by 2021. If companies do not comply they will hit with a fine.

Latest posts by Michelle Mears (see all)
Spread the news: