In July 2020, several hundred Black Lives Matter protestors marched onto Highway 101 in San Luis Obispo County, and occupying both north and south lanes, closed both directions of the freeway, and freeway on and off-ramps.

Numerous cars were damaged by the crowd, and others were surrounded by the protestors.

“According to the San Luis Obispo Police, while on Highway 101, protesters damaged the hood of a car and shattered a rear window where a 4-year-old child was in the back seat and had glass shattered on him,” KEYT reported.

Judge Matthew Guerrero is a former public defender and was appointed to the Superior Court by former Gov. Jerry Brown.

The Globe talked with San Luis Obispo County District Attorney Dan Dow about this case and the bizarre decisions from the courts.

The legal filing described Dow as “aligned with right-wing conservative political organizations and fundamentalist religious groups that seek to vilify the Black Lives Matter [BLM] movement,” according to court documents.

The judge recused the DA “because of District Attorney Dan Dow’s ‘well-publicized’ association with critics of the movement, according to official court documents released…,” KEYT reported.

“I’m supposedly guilty by association because of things other people said,” Dow told the Globe. “If evidence showed we would not treat these defendants fairly, I would self-recuse.”

“What they did was shut down the freeway with 300 people, and caused a dangerous situation,” Dow said. SLO police even said the protestors faced charges for participating in a riot, unlawful assembly, conspiracy, unlawful imprisonment, and resisting arrest.

Shortly after the protest and subsequent arrests, DA Dow gave the invocation at a Candace Owens event. Owens is a New York Times best-selling author, and founder of the BLEXIT  organization. At that event, Owens said BLM is racist. Dow said this is how the protestors formulated the claim that he was racist.

Notably, Dow said Judge Guerrero used newspaper accounts as evidence in the case, but took no testimony or affidavits. “Even the Attorney General attorney told the judge this was not proper,” Dow said.

On September 2, 2020, DA Dow’s office filed False Imprisonment misdemeanor charges against Arata, as well as “Obstruction Of A Thoroughfare,” also a misdemeanor, and said she “willfully and maliciously obstructed the free movement of a person on a street, sidewalk, and other public place.”

On or about July 21, 2020, in the County of San Luis Obispo, State of California, the crime of False Imprisonment (Misdemeanor) in violation of PC236, a Misdemeanor, was committed in that TIANNA ISIS ARATA WENTWORTH did unlawfully violate the personal liberty of John Doe driver and occupants in Grey Toyota SUV at intersection of Osos Street and Pismo Street, San Luis Obispo, California.

On or about July 21 , 2020, in the County of San Luis Obispo, State of California, the crime of False Imprisonment (Misdemeanor) in violation of PC236, a Misdemeanor, was committed in that TIANNA ISIS ARATA WENTWORTH did unlawfully violate the personal liberty of John Doe, driver of Black 4 door BMW at Southbound Hwy 101 Santa Rosa Street offramp, San Luis Obispo, California.

The same day the DA’s office filed the charges, they released a press statement with details of the arrests and charges:

“Ms. Tianna Isis Aratawentworth is charged with thirteen misdemeanor counts including: one count of unlawful assembly, one count of disturbing the peace, six counts of obstruction of a thoroughfare, and five counts of false imprisonment.

Mr. Elias Bautista is charged with one felony count of resisting an executive officer by force or violence and two misdemeanor counts of resisting, obstructing, or delaying a peace officer for his acts committed against three individual peace officers.”

“Ms. Aratawentworth’s and Mr. Bautista’s conduct in this instance was not peaceful, but instead it violated the law by depriving other individuals in our community of their right to enjoy liberty,” District Attorney Dan Dow said.

September 4, 2020, Dow posted a lengthy explanation of the arrests on the PRotect Paso Facebook page in response to questions about why he only charged the protestors with misdemeanor offenses, and why felony charges were not warranted. 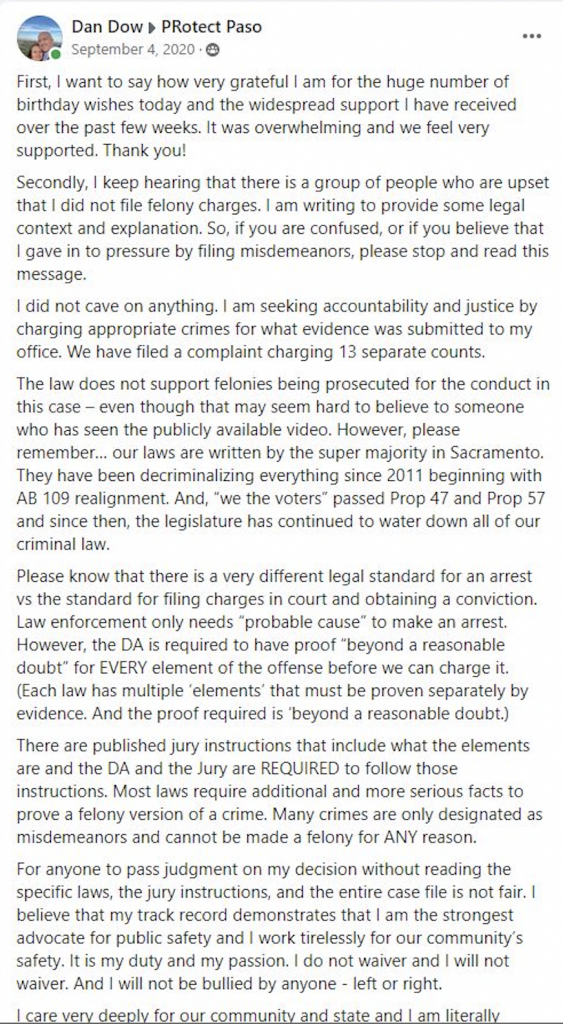 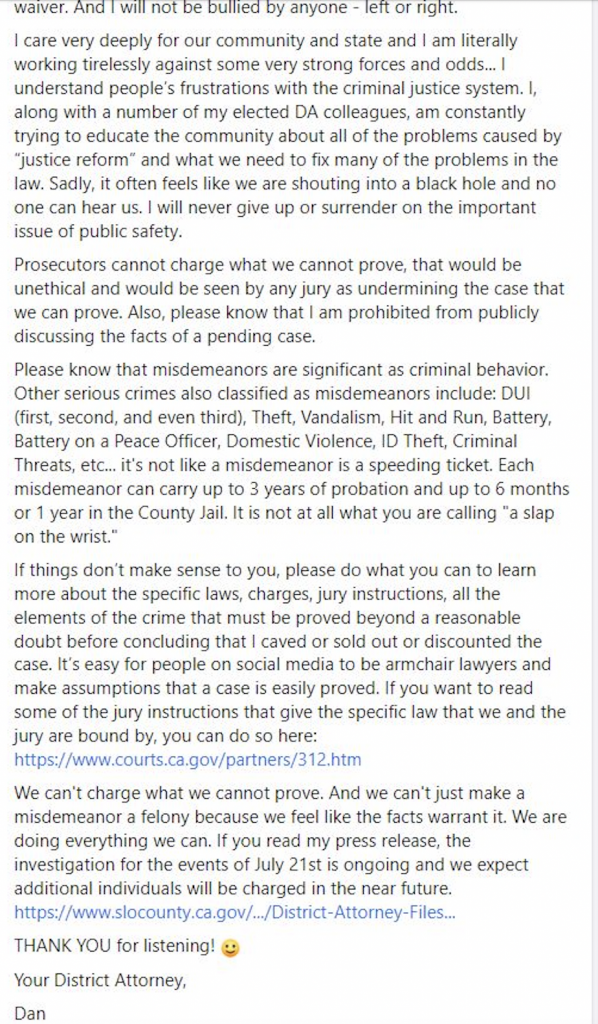 September 4, 2020, Dow’s wife sent out a fundraising letter for his re-election campaign, which Arata’s attorneys used to get him disqualified from the case. “The email asked supporters to help Dow lead the fight against the ‘wacky defund the police movement and anarchist groups that are trying to undermine the rule of law and public safety in our community,’” CalCoast News reported.

Judge Guerrero ruled Dow held a conflict of interest in the case. KEYT explains: “In the email, wording includes, ‘crazy protest movement,’ and ‘wacky defund the police movement and anarchist groups.’ Guerrero called the email inflammatory, an attempt to sway potential jurors and that it interferes with the defendant’s right to a fair trial. The judge cited personal statements Dow made, and highlighted to language used in the fundraising email his re-election campaign sent out two days after bringing charges against Arata.”

First, let me be clear I have deep respect for the judicial process and the judges who are called to make difficult decisions.

“With that in mind, I respectfully and strongly disagree with Judge Guerrero‘s findings and decision to recuse the District Attorney from prosecuting criminal activity that occurred during this summer’s protests. The law is clear that in order for a district attorney to be recused there must be an actual conflict of interest and the conflict must be so grave as to render it unlikely that the defendant will receive fair treatment during all portions of the criminal proceedings.

There is absolutely no conflict in this case. To the contrary. While I have been personally attacked on many occasions since the arrests in these cases, I have continued to conduct my duty in a manner that is above reproach without bending to popular opinion and public pressure. I am proud of the professionalism that our office has maintained under months of immense public pressure. We have thoroughly, fairly, and objectively reviewed volumes of evidence, conducted additional independent investigation, and made every decision based on the facts and the applicable law.  We have never wavered from our steadfast commitment to ensure that every defendant receives fair treatment while we perform our important Constitutional duty.

To recuse an elected district attorney who has been chosen by the voters of San Luis Obispo County to enforce the law in our community without any evidence of an actual conflict undermines the role and independent nature of an elected prosecutor and sets a dangerous precedent.”

After the Appeals Court decision, Dow issued this press statement:

“While we respect the Court of Appeal, we disagree with its decision that disregarded the law that was cited by the Attorney General in support of our appeal. There are many disputed factual issues that the Court of Appeal failed to address or ignored. We are considering whether to appeal this decision to the California Supreme Court and if so, we will state our position in writing at that time. I am proud of my and my office’s strong record of passionate and ethical advocacy for truth and justice in a fair and unbiased manner for the people of San Luis Obispo County. ”

The case will go to the State Attorney General now, removing it from San Luis Obispo County.

The Globe asked DA Dow if the disqualification of the entire District Attorney’s office could set a dangerous precedent in future cases. “Why wouldn’t defense attorneys not use this case again?” he asked rhetorically.

“We did the opposite of what they are doing,” Dow said.

Dow was elected District Attorney of the County of San Luis Obispo in 2014. He was reelected again in 2018 and on June 7, 2022 for another four year term.

Dan Dow is a Lieutenant Colonel, Command Judge Advocate, in the California Army National Guard, currently serving as a California State Military Judge for the Army and Airforce National Guard. 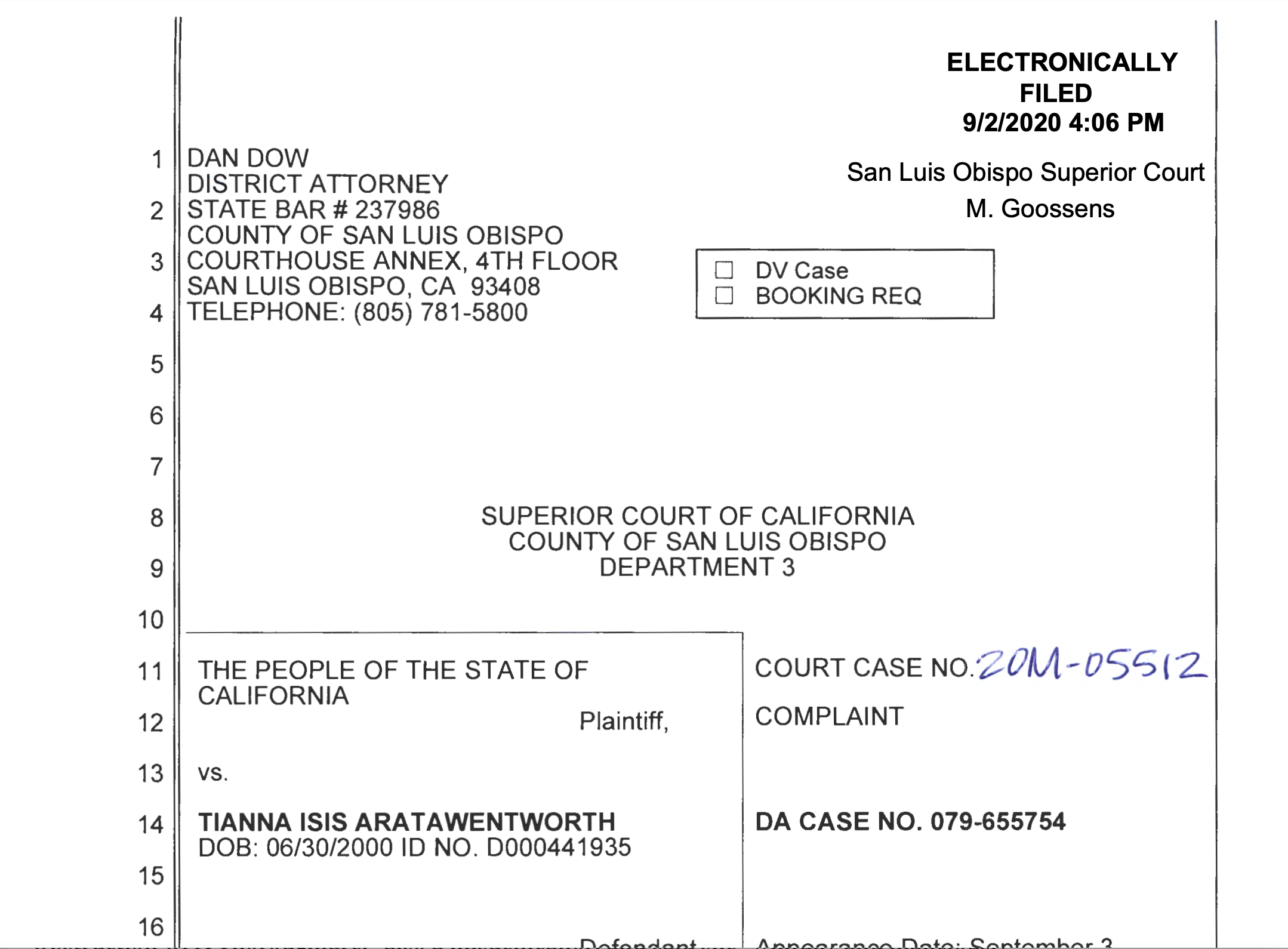