Home>Articles>Final Election Results Are Here at Last, and California’s GOP is Still in Decline
20 Dec 2022 6:51 am

On December 16, nearly 40 days after the November mid-term elections, California’s Secretary of State finally released the “Statement of Vote.” This document is the official and final record of the winners and losers. What is belatedly certain is what we knew all along. California’s GOP did not arrest the catastrophic slide that defines its performance so far in the 21st century.

Before covering what by any objective standard was a dismal performance overall, it is appropriate to highlight a few bright spots. California’s GOP delegation to the U.S. Congress increased from 11 members to 12, although the real turnaround, or perhaps “mini-turnaround” is more apt, was in 2020 when the GOP’s congressional caucus representing California had bounced back up to 11 from the rock-bottom 7 members that had survived the 2018 election.

With the single uptick logged this November, these 12 Republicans represent 23 percent of California’s 52 member Congressional delegation.

Notable in the GOP’s incremental gain this year was the victory of John Duarte, a newcomer to politics who in a fight for an open seat edged out the formidable Adam Gray, a moderate Democrat who had already served five terms in the state assembly. In a bruising fight, Duarte edged Gray by 564 votes in the 13th District, where 43 percent of voters are registered Democrats, versus only 28 percent registered Republicans.

Gaining one seat in the U.S. Congress was the one welcome bit of contradictory data in what was otherwise a complete downward slide. The GOP remained excluded from all eight higher offices, where the margins of victory for the Democratic candidates were ridiculous – Governor 59.2%, Lt. Governor 59.7%, Secretary of State 60.1%, Controller 55.3%, Treasurer 58.8%, Attorney General 59.1%, Insurance Commissioner 59.9%, and Superintendent of Public Instruction 63.7%. 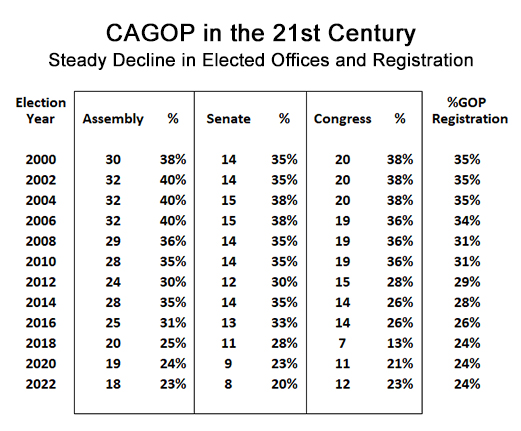 If the entire story of the last two decades weren’t steady decline, picking up enough seats to acquire a one-third share in both houses might seem more likely, but another trend belies much hope. The GOP’s share of registered voters also shows a perfect record of step-by-step decline. From 35 percent in 2000 to 34 percent by 2006, then down to 31 percent in 2008, dropping to 29 percent in 2012, 28 percent in 2014, 26 percent in 2016, and since then plateaued at 24 percent. Less than one in four registered voters in California are Republicans.

One might see good news insofar as at a glance, at least 24 percent roughly mirrors the share of seats California’s Republicans occupy in the state legislature and the U.S. Congress, but that misses what is perhaps the most discouraging fact of all; Democratic candidates are securing the support of the vast majority of independent voters in the state. Democrats represent a commanding 47 percent of registered voters, but the other 29 percent are independents. In most races, for every independent voter a Republican attracts, the Democrats are attracting two or three.

The failure of California’s Republican party, according to apologists for its slide into oblivion, is attributable to everything except their own leadership and management. The impossible stigma of Trump. The lingering stain of Prop. 187 all the way back in 1994, approved by voters, that denied state funded healthcare to illegal immigrants except in emergency cases. The unforgivable sin of Prop. 8, approved as well by voters in 2008, which banned gay marriage. Ever since these propositions were supported, mostly by Republicans, the GOP has been mercilessly portrayed by every Democrat, every liberal educator, and every major media property as both racist and homophobic. It has worked. A generation of voters have come of age since 2000, thoroughly indoctrinated to despise Republicans.

Excuses abound. Democrats in California now wield a political machine funded by public sector unions and abetted by every wealthy individual and powerful institution in the state, including major corporations ran by directors that would be out of their minds to challenge the narrative. This machine, this political juggernaut, has now seized upon climate change, a woman’s right to choose, and, of course, gender politics in all of its bizarre permutations, as further examples of Republican barbarism.

Topping off all these excuses for failure is the demographic trope. More than ever, California is now a minority-majority state, and minorities don’t vote Republican. Between 2000 and 2020, Hispanics increased from 32 percent of the state’s total population to 39 percent, while non-Hispanic whites dropped from 40 percent to 35 percent. Asians went from 11 percent up to 15 percent, and African Americans dropped marginally from 6 percent to 5 percent.

This is all daunting and sounds convincing, particularly when it is being recited by people whose jobs depend on making the case that they confront impossible circumstances that are beyond their control. But it’s old news. And for anyone serious about bringing vitality back to the California GOP, it’s irrelevant. The failures of the Democrats in every metric that matters to voters is a fact that supersedes all of the California GOP’s supposedly disqualifying history or demographic headwinds, all stereotypes and fearmongering, all indoctrination, and all the money and professional messaging the machine can muster.

In public education, transportation, water, energy, housing, homelessness, crime, forest management, cost-of-living, high taxes, and – coming soon – another round of budget deficits, the Democrats have made a mess. That levels the playing field. Republicans will start winning again when they have the courage to promote solutions that match the scale of the problems. That will not arise from the brainy recesses of well heeled consultancies and tepid focus groups. It will arise from new leaders who aren’t afraid to challenge fundamental premises and offer uncompromising alternatives.

24 thoughts on “Final Election Results Are Here at Last, and California’s GOP is Still in Decline”