California Governor Gavin Newsom just extended the state of emergency in California a third time, claiming it is related to increasing COVID threats.

Newsom’s latest executive order extends until the end of March 2022, making the “emergency” effective for a total of more than two years.

As the Globe reported earlier Thursday, Gov. Gavin Newsom, back from his two weeks of “family obligations,” said on Tuesday that wearing masks will remain one of his mandated orders – “for your safety and those around you.”

“Winter is coming. Winter is here,” he said at the California Forward conference in Monterey Tuesday, sounding more like a scene from the Hunger Games. “COVID is not taking the winter off.”

Yet COVID rates are plummeting in most fully-opened states, according to CDC data.

If Gov. Newsom’s emergency powers end, so do the mandates. And the executive orders. And county public health officers’ powers. But Newsom needs these to continue in order to use the autocratic powers that come with “emergencies.”

This appears to be the new model of governing, as we see in California, other blue states, and Washington D.C. with the Biden Administration. Declare a “health crisis,” keep the “health crisis” going, and then use that crisis to bypass democracy, and suppress Constitutional freedoms.

Newsom even “changed the laws for his own Recall right before the vote,” Assemblyman Kevin Kiley (R-Granite Bay) explained on his website. “He moved the election date in the manner of a banana republic.”

“Gavin Newsom cheated in the Recall,” Kiley said, and he did it by way of his emergency powers via executive order.

As for the COVID crisis, in California, 73.7% of the population is fully vaccinated, according to the California Department of Public Health. 54,700,680 total vaccines have been administered. And, there is only a 2.3% test positivity. More than 3.4 million booster shots have now been administered in the state.

We remember when the governor promised that if California got the COVID test positivity rate below 5%, mask mandates would be ended.

Strangely, just a few weeks ago, Gov. Newsom was touting California’s lowest-in-the-nation case rate, as the Globe reported, which had the state neck-in-neck with fully opened Florida (no mask or vaccine mandates). How did we jump to California’s COVID “case rate” is now twice Florida’s?

One-half of California’s counties (55/120) have 5.0 or less hospitalized COVID patients, according to the California Department of Public Health. Most of those have 0.0 hospitalized.

The governor has mandated vaccines for everyone in the state over the age of 5. School children must be vaccinated or go back to distance learning. State and local government employees must be vaccinated, or forgo their jobs. In some circumstances, those who are not vaccinated must take COVID tests in order to travel, attend school, attend events, etc… thus driving up and maintaining the testing rate.

This is notable because while Gov. Newsom was MIA, the state quietly renewed the license/contract of the PerkinElmer COVID testing lab – a $1.7 billion no-bid PerkinElmer COVID-19 testing contract.

“I would also like to point out the weekly data by the Turnaround Time Dashboard published by CDPH for all COVID-19 testing labs in the state. The dashboard shows that a significant number of tests consistently take more than two days to complete, and hope you might be able to explain why, nine months after, this is still the case. You can see that most private labs are making the 24 hour turnaround time, while VBL is a consistent outlier. In some weeks, such as in the week of 9-26-21 through 10-2-21, more than 34% of tests missed the 48 hour window. The lab’s performance is especially concerning considering that the Governor’s press release on the contract, which emphasized that the purpose of this contract was about reducing turnaround time.”

In August 2020, Gov. Newsom announced that a “Twindemic” would be upon us soon with COVID and the flu season in the fall, at the same time he announced the new partnership with PerkinElmer, Inc. a diagnostic company, to build a laboratory within the state, and increase COVID-19 testing into March 2021.

Be sure to re-read “Gov. Newsom’s $100 Million COVID Lab Has Trouble Again With ‘Significant Deficiencies’” 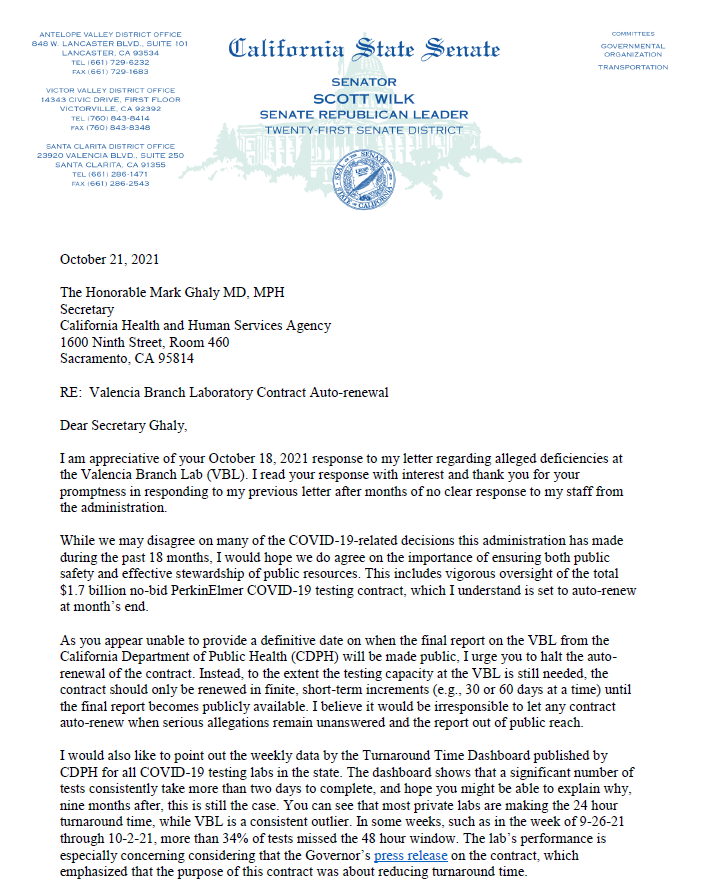 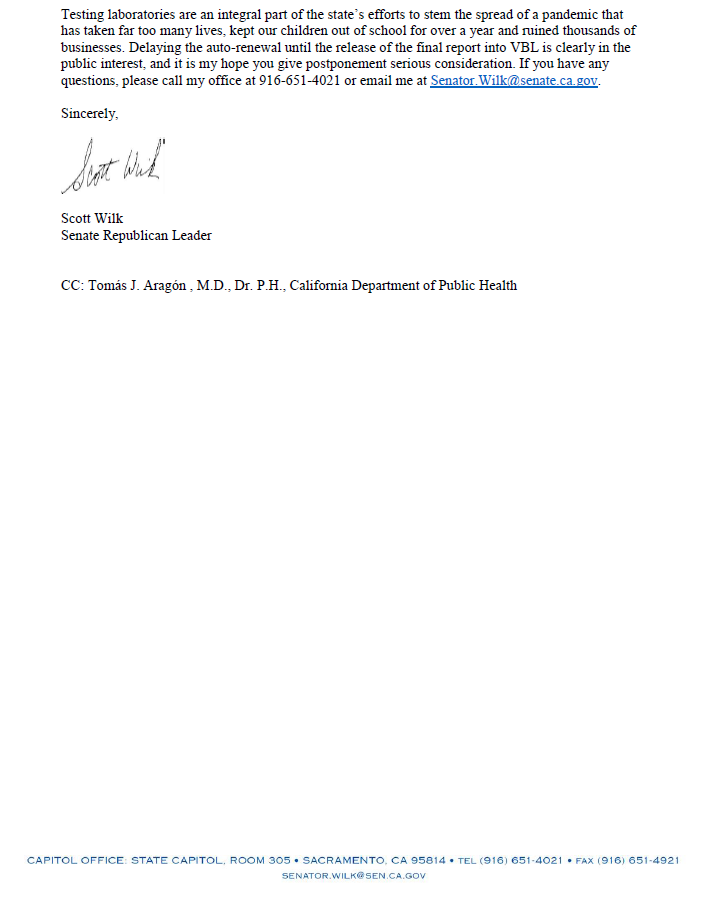