“If AB 5 is not immediately suspended then the consequences of the coronavirus collapse will be magnified,” former Congressman Doug Ose said in a letter to California Gov. Gavin Newsom recently. “Your action now to suspend AB5 will provide relief to over one million Californians.”

Since Assembly Bill 5 became law January 1, 2020, millions of freelance and independent contractors’ jobs have been killed. And at a time when California needs all hands on deck during the coronavirus crisis, AB 5 is preventing desperately needed health care and medical professionals who are independent contractors, from working.

Millions of Californians who are independent contractors, gig economy workers, and freelancers, have been calling on Governor Gavin Newsom to use his Emergency Powers to suspend Assembly Bill 5’s restrictions on independent contracting during the COVID-19 crisis.

“Every day we wait to take action, more Californians are losing their livelihoods as the result of AB 5,” Assemblyman Kevin Kiley (R-Rocklin) says. Kiley has asked Gov. Newsom to suspend AB 5 for myriad reasons, and sent multiple letters.

California Globe spoke with Kiley Wednesday and asked whether he has had a direct conversation with Governor Newsom about AB 5’s negative impacts on jobs – before and now during the coronavirus crisis.

Kiley said the governor’s office takes his calls, and he has spoken to Newsom’s Legislative Affairs Director, but there are no substantive conversations about the need to suspend AB 5. Gov. Newsom has not even publicly acknowledged Kiley’s letters and calls to suspend AB 5, at least during the coronavirus outbreak to allow more independent contractor doctors and nurses to join in the effort to flatten the curve of outbreaks.

Doug Ose, Chairman of Rebuild California Foundation, said to the governor in his letter, “if AB 5 is not immediately suspended then the consequences of the coronavirus collapse will be magnified. Your action now to suspend AB5 will provide relief to over one million Californians.”

Assemblyman Kiley’s letter to Governor Newsom laying out the legal authority, under the California Emergency Services Act, for the Governor to suspend the recently enacted law, would allow more Californians to work remotely and enable greater provision of care by a host of healthcare professions.

Many have been even harder hit with the stay-at-home order by the governor since the outbreak of coronavirus. Those who used to work freelance jobs, or independently contract for employment can’t even go out and find a job now.

“Suspending AB 5 would be the right thing to do,” one man wrote on Twitter. “It would deliver so many from the shackles of unemployment and put money in their pockets during this tough #COVID19 crisis.”

Another woman Tweeted, “Our governor doesn’t trust its citizens to work the way they want to,” and posted this graphic: 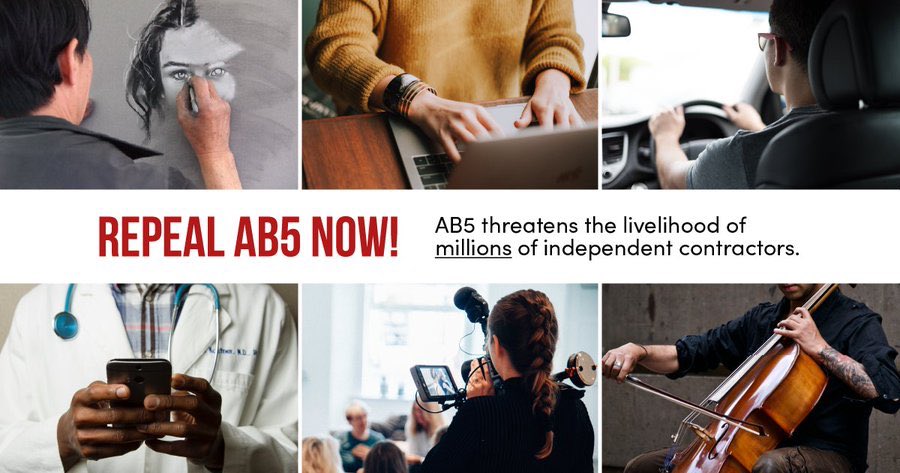 Ose is also concerned about the impact on medical professionals in rural areas. “We are all aware of the significant challenge facing us dealing with coronavirus,” Ose said. “Those challenges are particularly acute in rural California, where hospitals and clinics don’t have sufficient patient loads to support full time positions in a number of physician and nursing specialties.  In the past, such needs have been met by contracting with independent contractors to provide services.  That approach is problematic now that AB 5 has become law.”

“So many people are unable to work because of AB 5, and now with coronavirus,” Kiley said. “At a time when most Californians can’t work outside the home, AB 5 is stopping many of them from working inside the home.”

It was revealed during Senate debate in September that the AFL-CIO wrote AB 5.

All AB 5 lawsuits are currently being held up in courts because of the coronavirus outbreak.