“We remain focused on ensuring Arizona is the best state in the nation to develop new ideas and launch or scale a business,” says Gov. Doug Doucey. Arizona has six multi-billion businesses moving to or building manufacturing plants, including Amazon, Cognizant, and SeaCa Packaging, and is home to six Fortune 500 companies.

California Globe recently interviewed several former California residents about their decisions to move to other states, including why, the economics and freedoms and liberties they realized once relocated. The first article featured former California State Assemblyman Chuck DeVore. This second article features a business owner and his wife who left the San Diego region for Prescott, Arizona.

Steve and his wife were both born in California. “I was born in Hollywood – it doesn’t get more California than that,” Steve said. He attended University of California, San Diego and his wife California State University San Diego. They decided not to go back to Los Angeles after college, and stayed in the San Diego region for more than 30 years. (We aren’t using their surname because they are business owners.) 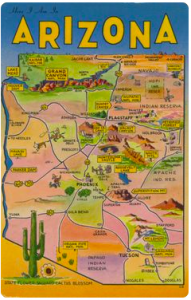 “I felt like I was chased out of my own home state,” said Steve, who has owned a software business for many years. He and his wife were 30+ year residents of a San Diego County town, but finally decided to make the move out of frustration over California’s regulatory environment, as well as ridiculously high income, property and sales taxes.

“But now, even in San Diego, I have a friend who has been trying to build a barn on his property for 14 months and can’t get it approved.”

“When we moved to Arizona, we realized an immediate 10 percent gross income increase – an immediate pay raise,” said Steve. “Same with the sales tax and property taxes, although they are a little less than California.”

Arizona does have an income tax and collects it from residents in five brackets. The lowest rate is 2.59 percent; the top rate is 4.54 percent.

“But regulations… Arizona is much more friendly!” Steve said. “When I closed our California office, I spent 30 minutes just taking down the government regulatory and labor law posters.” California is now up to 29 mandatory government regulatory and labor law posters, which includes Notice of Inspection by Immigration Agencies, Minimum wage,  Paid sick leave, Whistleblower protections, and Transgender Rights in the Workplace, to name just a few, all required by the Department of Industrial Relations.

“It’s the operations costs, the utility costs, and the building costs,” he said, drawing the significant difference between California and Arizona.

Steve and his wife bought a large piece of property and said they were building a larger home on it than they had in California. “We got our permits in three months for only $10,400. And we are building a big home on seven acres,” he said. Steve and his wife also had to drill for a well, which he said cost them $16,000, noting in California, well drilling has almost ground to a halt by the state over water issues.

Steve and his wife bought their property for $14,000 an acre, only 20 minutes from town, which is about half of the property costs where they lived in San Diego County.

Qualified Facility Tax Credit: Offers a refundable tax credit of the lesser of: 10% of qualified capital investment, $20,000 per net new job or $30 million per taxpayer per year, for location of manufacturing or R&D headquarter facilities.

Quality Jobs Tax Credit: Offers a state income tax of up to $9,000 over a three-year period for each net new quality job.

R&D Tax Credit: Offers a nonrefundable income tax credit for basic research payments made to universities under the jurisdiction of the Arizona Board of Regents.