In June, U.S. Representative Katie Porter (D-CA-45) hijacked a Congressional hearing on gun legislation to trumpet her own agenda, when she falsely accused a witness of perjury, and exploited House committee rules to prevent the witness from defending herself. Fellow members at the same House Oversight and Reform Committee session urged Porter to allow the witness to respond to the accusation, but to no avail.

The witness Porter slandered, Amy Swearer, a legal fellow at the Heritage Foundation, was called to testify on the constitutional and practical implications of further gun legislation. The committee’s objective was to gather information in its effort to “pass commonsense legislation…while respecting the rights of law-abiding gun owners.” Once Swearer was silenced, Porter took over to rant instead about the federal government’s failure to allow the Consumer Product Safety Commission to recall firearms from the market.*

Porter’s signature style once again drew national attention, as the video of the incident went viral, and Americans watched her abuse her position as a legislator, with impunity. Members of Congress cannot be sued for slander in Congressional sessions.

Porter’s continued antics belie her ineffectiveness in Congress. Her dramatic public displays have pulled in over $20M in campaign contributions to date, mostly from donors outside of her district and county. Yet, in two terms and three years, she has produced little that is legislatively substantive. Her televised beratement of witnesses and disrespect for colleagues serve only to showcase her unwillingness to work through the legislative process productively. And she does it with an eye on campaign donations. In Congress, Porter is not a voice for Americans, let alone Southern Californians.  She is a looping campaign ad.

Since 2019, Porter has sponsored over 80 bills and only one has passed both Houses of Congress – H.R. 1170, to rename a post office in Irvine, California. About 75 bills remain in committee, 18 of which were reintroduced in Porter’s second term.  Overall, nine bills call for more federal spending through grants.

In 2021, Porter lost a coveted seat on the House Financial Services Committee. One source explained that Speaker Nancy Pelosi (D-CA-12), through the Steering Committee, removed Porter, to placate bank executives and financial regulators. Another reported that the committee Chair, Maxine Waters (D-CA-43), who has a reputation for “pushing bipartisan legislation that won’t rock the boat” did not like Porter’s style. Porter has been disliked by members of her own party.

Porter tweeted at the time that she had “a clear record of getting things done on the Financial Services and Oversight Committees, calling out powerful people, exposing corruption, and inviting the American people into conversations.” Her track record proved otherwise. According to the LA Times,” only one of her financial-services-related bills made it through the Democratic-controlled House as part of a broader piece of legislation during her first term…”

Meantime, Porter’s position on federal spending bills contradicts her more recent epiphany over inflation, an issue that has beleaguered Democrats for 18 months. In 2021 alone, Porter supported five major spending bills, notably the Build Back Better Act (BBBA) that would allocate more than $1.7 trillion to a myriad of projects.

In September 2021 Porter attacked Senator Joe Manchin (D-W.VA.) in a MSNBC interview because of his concerns over the cost of an earlier and exorbitant $3.5 trillion budget reconciliation bill.  Thereafter, BBBA passed the House in November 2021, but stalled in the Senate due to its potential inflationary impact and a growing federal deficit. According to the Washington Post, it seemed that “sometimes the White House appear(ed) to be rebranding (BBBA) as an inflation-fighting plan,” when in fact it still needed to be scaled-back.  Porter’s September interview, in effect, alerted the Senate to continue to act with caution.

Unfortunately, voters have to sift through the hubris that progressives like Porter disseminate through social media and late-night television interviews. Those like Porter herald a cause, or all causes for that matter, to rein in donations, but do not hold themselves accountable to realistic outcomes. More disturbingly, they act unconscionably in luring individual Americans to contribute to campaigns based on irresponsible rhetoric.

Let us be clear, Porter represents California’s 45th U.S. Congressional District but seeks re-election in the state’s 47th district, where Porter does not represent two-thirds of its voters. Due to the 2021 redistricting of Orange County CA, a race in the 45th district would prove too challenging for Porter without the city of Irvine, which is now part of the 47th district.

With staggering inflation, a deepening recession, and the ongoing threat of fentanyl, smuggled through California’s southern border, no district in California deserves a Representative who rudely espouses far-left ideology that pushes Washington to balk.

*The Heritage Foundation filed an official ethics complaint in July 2022 with the Office of Congressional Ethics (OCE) on behalf of Heritage legal fellow Amy Swearer, against U.S. Rep. Katie Porter of California for “knowingly and intentionally defaming” Swearer during a June 8 hearing before the House Oversight and Reform Committee on gun violence and Second Amendment rights. 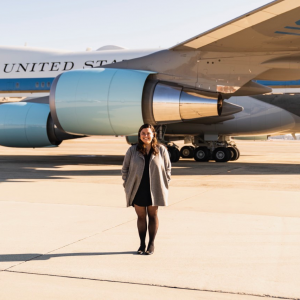 Alex Stone
Alex Stone was the former Special Assistant to the President and Deputy Director of Management and Administration. She was formerly Deputy Executive Director for GOPAC and former Israel Seminars Coordinator for AIPAC.

Latest posts by Alex Stone (see all)
Spread the news:

3 thoughts on “Opinion: Why Rep. Katie Porter is the Wrong Person for the Job”