Sen. John Moorlach (R-Costa Mesa) just released his new report on the finances of the state’s 482 cities. Gird your loins for more generally bad news – only 43 percent were in positive territory for 2018, down from 46 percent for 2017.

The total combined negative unrestricted net positions* for the 482 cities got worse, going from $22.7 billion in the red in 2017 to $31.5 billion in 2018. That is a 39 percent increase in these unfunded liabilities in just one year. It is also like the 40 percent increase in one year in unfunded liabilities for the state’s 944 school districts, as detailed in my December 11, 2019 School Districts Report. Although for the schools, the total negative number was worse at $70.9 billion.

For the first time, new regulations by the Governmental Accounting Standards Board (GASB) required municipal audited financial statements to include retiree medical liabilities. Balance sheets refer to this as Other Post-Employment Benefits (OPEBs).

With the OPEB addition, more cities are seeing their unrestricted net positions (UNPs) dip further into the red, the report finds. “Cities are supposed to provide their financial statements within a reasonable time after the ending of each fiscal year on June 30. For consistency, this report includes the financial statements for June 30, 2018, meaning the cities have had 18 months to complete this essential part of transparent government.”

“Despite that long-time frame, 17 cities have not yet completed their 2018 statements,” Moorlach says. “In those cases, I have extrapolated the data from past statements to produce 2018 numbers for this report. The data for those cities are shown in boldface. The 17 delinquent cities are Adelanto, Amador, Artesia, Blue Lake, California City, Coalinga, Compton, Etna, Fort Jones, Fowler, Isleton, Maywood, McFarland, Riverbank, Sonoma, Westmorland and Windsor.”

Jump to page 11 to see the UNP for each of California’s cities. My own city of Sacramento’s UNP is $6.7 million. 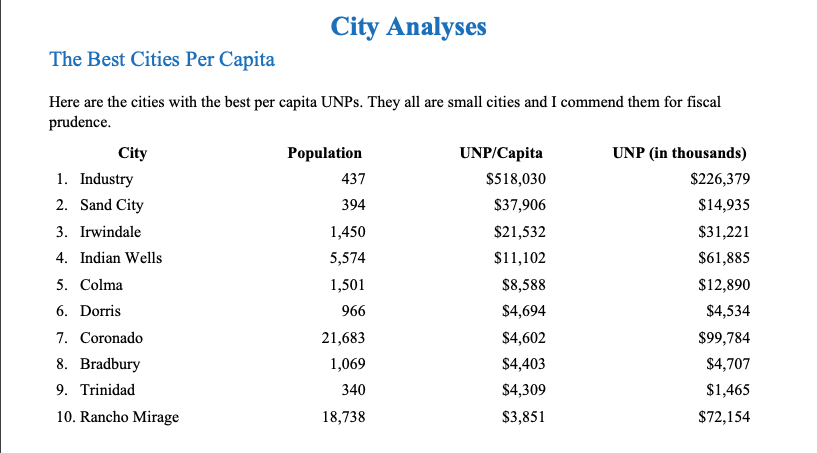 The City of Los Angeles

“How does a city with 4 million residents increase its Unrestricted Net Deficit by $1.4 billion in one year?” Moorlach asks. “The net increase in the reported liabilities for pensions and Other Post-Employment Benefits explains $1.2 billion of the 22 percent jump. Although Los Angeles enjoys 10 percent of the state’s population, its Unrestricted Net Deficit’s growth is 16 percent of the combined increase by all of California’s 482 cities.”

Moorlach says on January 10, 2020, Gov. Gavin Newsom will release his preliminary budget proposal for the 2020-21 state budget. “Hopefully, he will take account of the cities and how elected leaders in Sacramento can provide assistance in encouraging strategies to pursue for fiscal relief.”

To read Sen. Moorlach’s entire report, it is available HERE. 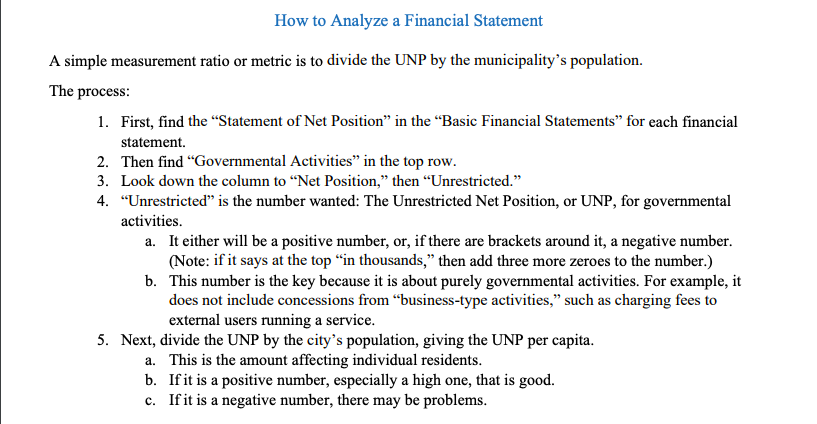