“Today’s election did not go our way. Although some ballots remain to be counted, it’s not enough to overcome our current deficit of 53 percent to 47 percent. Congratulations to Senator-elect Brian Dahle. I wish him the best in his new position,” Assemblyman Kevin Kiley wrote on Facebook as he conceded the Senate District 1 Special Election to Dahle Tuesday night.

The Senate District 1 seat was vacant after former Sen. Ted Gaines won his race for the Board of Equalization.

This race had unusual results with rural voters winning over urban/suburban voters. 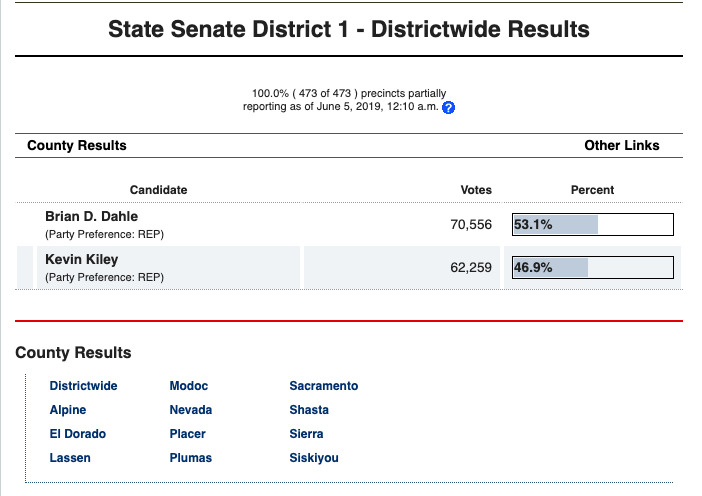 The race was tainted early on in the primary when Kiley sued SD 1 Republican challenger Rex Hime shortly before the deadline to print primary ballots. Hime, who wanted his ballot title listed as “taxpayer advocate” lost in court to Kiley and was forced to switch the designation to “small business advocate.”

“A misleading mailer was sent to voters stating that a longtime Republican figure who had already dropped out of the race was the ‘clear’ choice for Democrats,” the Sacramento Bee reported. “The mailer was paid for by ‘Taxfighters for Brian Dahle for State Senate 2019,’ though Dahle said his campaign was not affiliated with the campaign committee.”

“California Republican Taxpayers’ Association, which appears to be a one-man show run by a hired political gun by the name of Brandon Gesicki,” David Schwarz wrote in a California Globe op ed.  The Dahle campaign not only pays Gesicki for political consulting; it also funded a hit piece sent out on his organization’s letterhead which, among other things, falsely accused Kiley of voting “to help let illegal immigrant criminals stay in the US.”

Dahle has a long history in Northern California. He has represented California’s First Assembly District since 2012. Before joining the Assembly, Dahle served 16 on the Lassen County Board of Supervisors.