Home>Articles>The Abundance Choice, Part 2: The Problems With Indoor Water Rationing
12 May 2022 2:45 am

Perhaps the biggest example of misguided water policy in California are the escalating restrictions on indoor water consumption. As will be seen, the savings these restrictions amount to are trivial in the context of California’s total water consumption, yet are imposed at tremendous cost both in quality of life and in the required economic sacrifice. Despite alternatives that are objectively more cost-effective, California’s water policy continues to go down the path of rationing indoor water use.

It is fair to point out that some of the more alarmist reactions to these mandates are unfounded. For example, the laws will only measure aggregate use within a water district, which means that how individual users are treated if they exceed the per person indoor water limits is left up to the local utilities. That’s hardly reassuring, but at least it leaves some wiggle room. On the other hand, it creates a powerful disincentive for water agencies to invest in developing an increased, more resilient water supply, because with aggregate maximums limiting how much water the agencies can sell, they’ll think twice before adding capacity. One of the dangerous consequences of this, yet again, is a system that is less equipped to withstand serious disruptions to supply.

In any case, enforcing these mandates will not have a significant effect on overall water consumption in California, and the cost of implementing them does not make financial sense compared to other ways those funds could be invested.

To estimate the statewide savings that could be achieved by imposing a 55 gallon per person limit on indoor water use, first consider the current statewide indoor water consumption as estimated by the California Department of Water Resources. This total has been fairly consistent over the past ten years at around 2.5 million acre feet per year. This yields somewhat surprising results. Based on a population of 40 million, as shown in the calculations on the chart, Californians are only using about 60 gallons of water per day, per person, indoors. 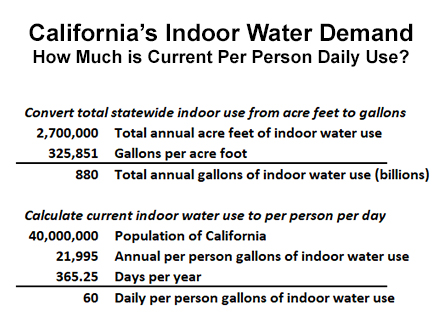 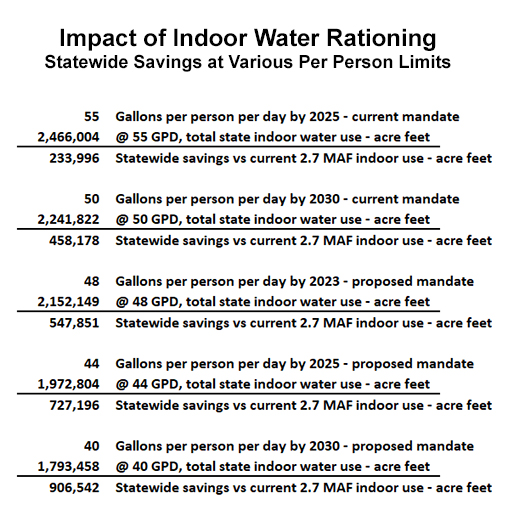 It isn’t the intent of this analysis to disparage the achievements already made in indoor water conservation. But most of them have already been made, and the ones swiftly moving from recommended to mandated in many cases do not work very well. Most people would agree that low flow toilets, for example, are a good idea. If they don’t work on the first flush, it’s easy enough to flush them twice. But low flow shower heads and kitchen faucets cross the line into genuine inconvenience. The inadequate flow in a shower head makes it nearly impossible – especially with soft water – to rinse shampoo out of long hair. The constrained flow in a kitchen faucet means waiting sometimes several minutes before hot water arrives. Circulating pumps to remedy this don’t work very well, and the cost of flash water heaters is beyond the reach of most households. But it’s with washing machines that the misanthropic cruelty of mandating unproven appliances is clear for all to see. These machines damage fabric, they don’t clean very well, and their cycles take too long. The reality of owning and maintaining water efficient washing machines is the antithesis of the legendary Maytag television advertisement, where a repairman sits by the phone that never rings, because the machines never break. The ad was true back then, but not today. Not only do many of these machines have useful lives measured in years instead of decades, but the newest models are being marketed as “connected” appliances.

Volumes could be reported on the rapidly diminishing returns that currently accrue to water efficient appliances, once they reach beyond practical and reasonable limitations. But why are we having this debate? Doesn’t all that water flow down the drain, through the sewer mains, and into a water treatment plant where it is purified and returned to the rivers and aquifers? And in the case of California’s massive coastal cities, why isn’t treated wastewater, which currently is discharged into the ocean, instead treated to higher standards and pumped right back upstream? Existing treatment processes allow up to 90 percent of urban wastewater to be be reused. As will be seen, this solution is already being implemented in Orange County, where next year, what is already the world’s largest wastewater treatment facility for indirect potable reuse will complete its final expansion to recycle and reuse 100 percent of their wastewater. But this solution should be implemented in every county in California, starting with the coastal counties.

Current policies aimed at cutting urban water use are misguided with respect to indoor residential water use not only because the water savings are insignificant when compared to total statewide water use, or because indoor residential water can be reused over and over again merely by upgrading the treatment of the wastewater. They are also misguided because the economic cost of indoor water rationing is more than the economic cost of constructing upgrades to urban water treatment plants. This isn’t immediately obvious, since if urban water treatment plants aren’t upgraded, consumers don’t have to foot the construction bill through higher rates. But they will pay anyway. To accurately monitor indoor water consumption, urban water agencies are planning to install a second meter on every residential property. That cost will appear in the rates they pay. Moreover, water utilities only spend about 0ne-third of their budget on water, with the other two-thirds going mostly to pay overhead. This means that as residential water consumers use less, their water bills will not go down. They can’t. It would break the water utilities.

Another significant economic cost to ratepayers is that even if the utility manages to deliver less water without raising rates too much, there is still the burden imposed on every household to retrofit their appliances to conform to the new water mandates. It is not possible to reduce residential indoor water consumption by 33 percent without buying every gadget the major appliance manufacturers can possibly come up with. These new “connected” water appliances will cost every California household thousands of dollars, with new and ongoing payments for software updates and maintenance and earlier replacement that the old appliances never imposed on their owners. And those residents who cannot afford these appliances will be subsidized by the ones who can, with that cost reflected either in higher water rates or higher taxes.

There is an alternative. Instead of rationing residential water use, direct this economic value to investment in infrastructure. If the State of California subsidizes the construction of wastewater recycling upgrades, reducing indoor water consumption no longer has to be a legislative priority. This principle, that state investment can reduce the capital cost to local and regional water agencies, has applicability across all areas of water infrastructure. It is based on the idea that if a society must bear an economic cost to overcome water scarcity, that cost can either be borne on the front end by upgrading water infrastructure, or on the back end by imposing rationing and punitive costs on end users.

The premise of the initiative we developed was to adhere to the first option: Let the State of California again build a water infrastructure that solves the challenge of water scarcity, capitalizing on everything we’ve learned since the marvelous system we rely on was first constructed in the past century.

9 thoughts on “The Abundance Choice, Part 2: The Problems With Indoor Water Rationing”