It’s open season on those right-of-center, conservatives, and moderate Democrats, and the media is mostly silent about it. The assignation attempt of Supreme Court Justice Brett Kavanaugh went unreported in major media outlets. The homemade explosive device found outside the home of San Jose City Councilwoman Dev Davis also received little to no coverage, except for the Globe’s.

Dr. Wenyuan Wu, Executive Director of Californians for Equal Rights Foundation and the historic No on Proposition 16 Campaign, has become fodder for an anonymous group of haters on Twitter for daring to question the California Reparations Task Force. Dr. Wu notes that the the Reparations Task Force is a nine-member team of Democratic politicians, activists, and scholars.

In a recent article Dr. Wu wrote for for Minding the Campus titled “Reparations or Ransom?” she was critical  of the California Reparations Task Force’s recent 500 page report, and the “sweeping policy recommendations such as zero-interest home loans, free college tuition, free healthcare, tree-planting for environmental equity, voting rights for the incarcerated, and monetary compensation at both the state and federal levels.”

She did an interview with NBC San Diego, and the Twitter trolls started attacking. 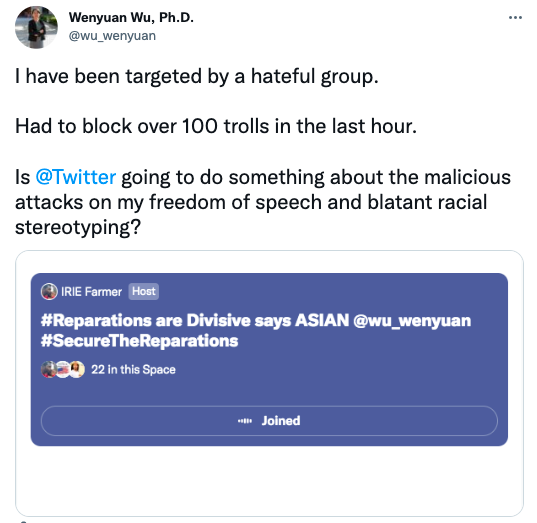 The Twitter trolls don’t use their real names and say vile, racist things: 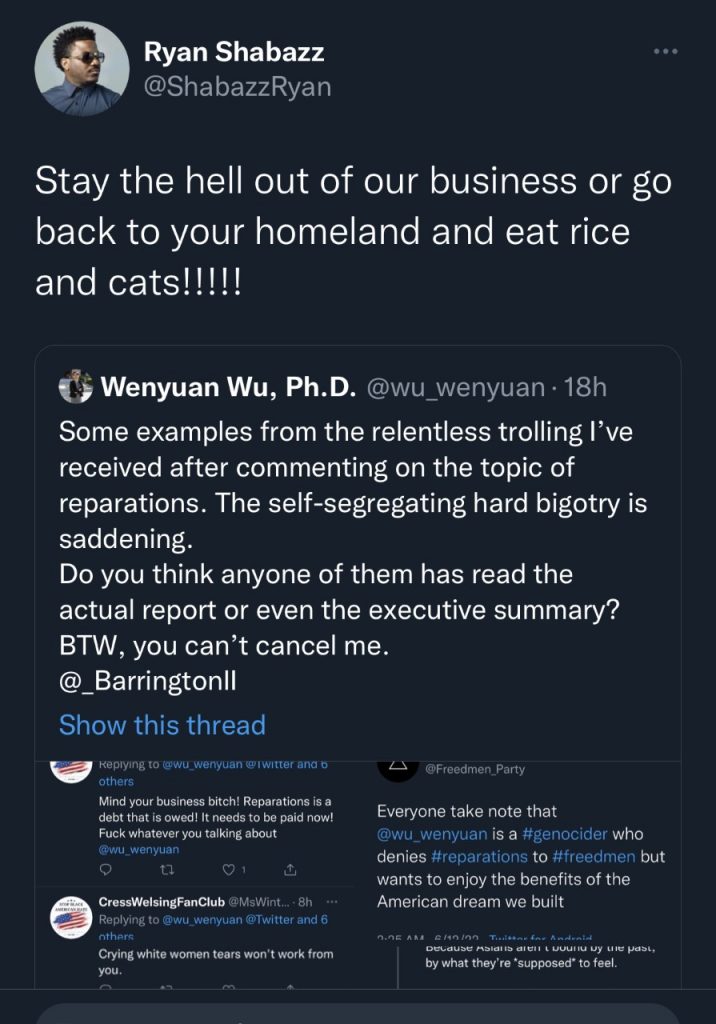 Wu has been viciously targeted by hate groups on Twitter: 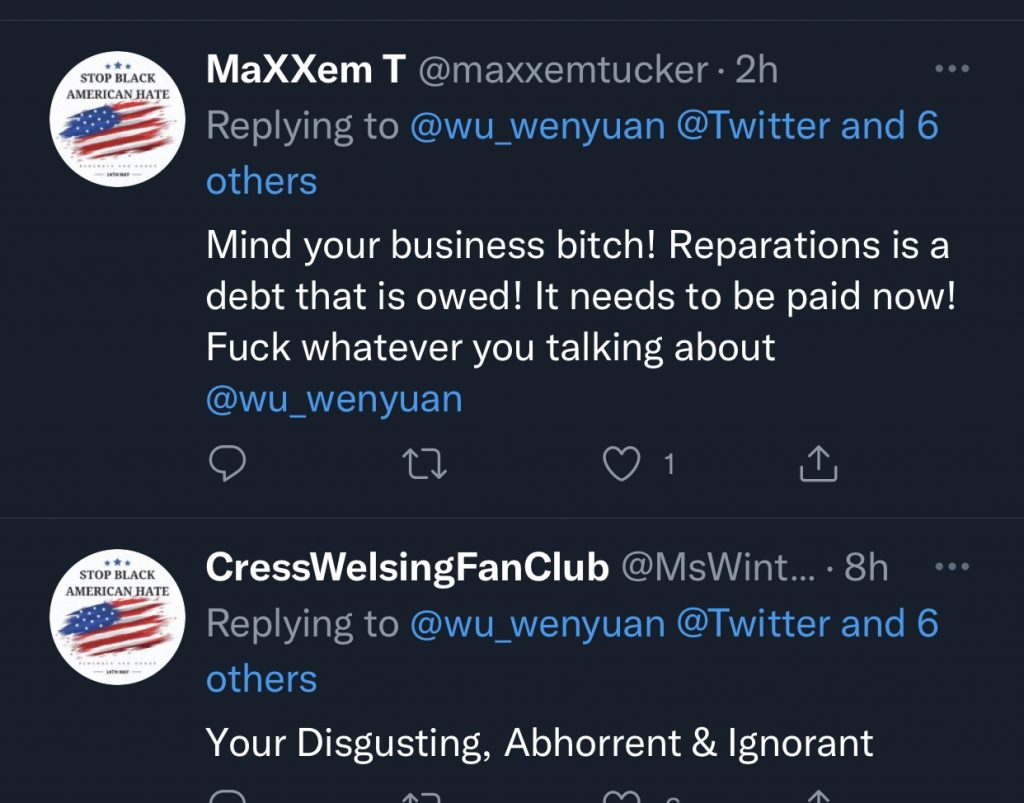 In her article, Dr. Wu challenges the Task Force’s findings:

The jaw-dropping findings from this “first-in-the-nation effort by a state government to study slavery, its effects throughout American history, and the compounding harms” rest upon the sole premise that systemic racism is a permanent feature of America. Slavery and its legacy institutions, including white supremacy, housing segregation, employment discrimination, and a lack of education funding, are the chief culprit behind contemporary racial disparities in wealth, health, and learning. The report’s grim outlook on American society, a nihilist stance that discounts any socioeconomic progress in advancing racial equality, makes a mockery of our multi-racial democracy. 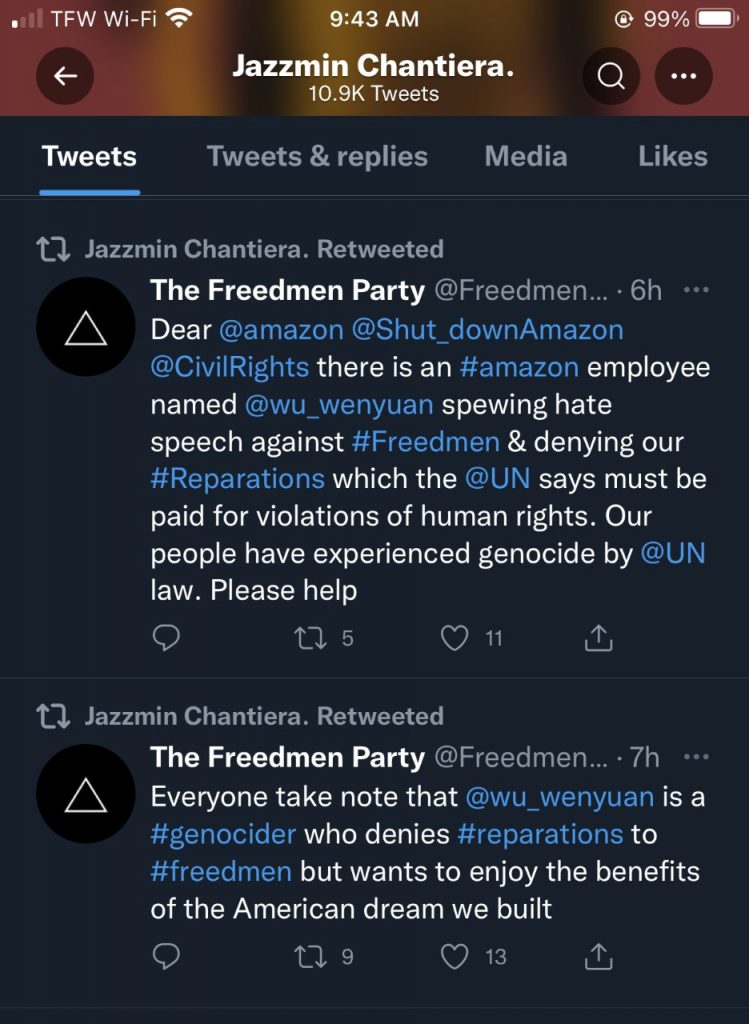 Wenyuan Wu said some of the Twitter trolls called for a boycott of Asian-owned businesses:

Conveniently, the report does not make a distinction between descendants of African slaves and black Americans, a diverse group encompassing 46.8 million people with ancestral roots across the globe, 10% of whom are foreign-born. In a similarly cartoonish fashion, the extensive endeavor uses whites as the baseline for crude, dichotomous comparisons to justify alleged institutionalized harms, although many observed disparities exist between non-white groups as well.

The authors argue that during American slavery and even after the Civil War, white supremacy created insurmountable obstacles for black children to obtain quality education, the effects of which are still felt today. This dark reality is said to be true even in California, where white-led state legislatures allegedly passed a series of laws to racially segregate public schools and severely underfund black schools, although the state joined the Union in 1850 as a free state and the state constitution at the time contained an anti-enslavement clause.

“A California law passed in 1855 withheld state funds from schools that taught Black and Chinese children. So although California taxed African Americans to pay for the state’s public schools, a Black Californian’s taxes only paid for the education of white children, and they had no right to education for their own children.”

The addition of Chinese students to the equation is one of the few exceptions to the black-vs-white contrast throughout the report. Ironically, if pre-Civil War racist laws still have long-lasting effects in the present day, how can one explain the fact that the biggest academic achievement gap today by every measurable metric is not the one between white and black students, but that between Asian and black students?

She said much of this can be traced back to 2020 and the No on Proposition 16 campaign, which sought to remove the following from California Constitution:” The state shall not discriminate against, or grant preferential treatment to, any individual or group on the basis of race, sex, color, ethnicity or national origin in the operation of public jobs, schools, and contracting.”

Dr. Wu said she was similarly attacked during the No on Prop. 16 campaign. “They want to intimidate me,” Dr. Wu said.

Voters soundly defeated Prop. 16, and the merit-based system remains in place, even if schools and government don’t actually practice it.

As for Dr. Wu reporting to Twitter the harassment she received with these hateful and racist Tweets, she said Twitter claimed there was no harassment.

Dr. Wu writes for Minding the Campus of the National Association of Scholars and sits on the board of Parents Defending Education Action and is a contributor to California Globe. You can read “Reparations or Ransom?” at Minding the Campus.