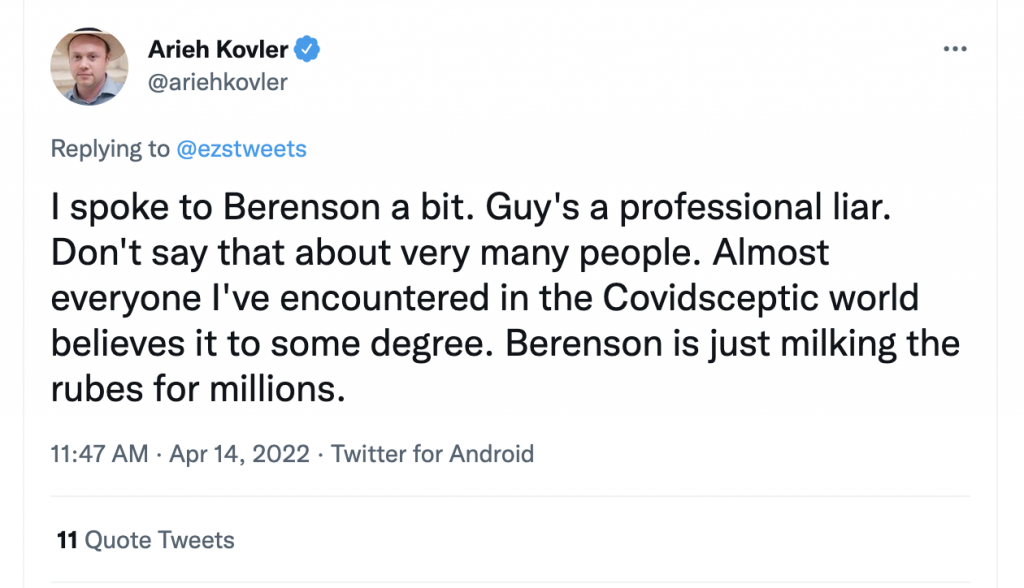 UPDATE: This story has been updated to add comment from Arieh Kovler (2 pm PST).

Yet another fascinating Twitter feud broke out this morning, on the heels of Elon Musk’s shocking week of position-amassing, board-joining, board-exiting and possible company acquisition.

Kovler responded: “I spoke to Berenson a bit. Guy’s a professional liar. Don’t say that about very many people. Almost everyone I’ve encountered in the Covidsceptic world believes it to some degree. Berenson is just milking the rubes for millions.”

He added a later tweet: “Actually, liar is wrong. He rarely lies outright. He distorts, misrepresents and misleads in ways that someone can only do if they understand they’re doing it.”

Calling someone a “professional liar,” if untrue, is libelous. This is one of those areas that journalists get taught in the seminars that their publishers hire lawyers to lead. Usually in libel cases, a plaintiff has to prove a claim is 1) false, 2) damaging, and 3) that the publisher of the information knew or should have known it was false and damaging. (In the case in which the libeled party is a public figure, he also has to prove that the publisher acted with malice.) Calling someone a “liar,” just like calling him a “felon,” if proved untrue, generally removes the burden on the plaintiff of proving that the information is damaging. In other words, if the publication had written that the plaintiff was a “ladies’ man” or “seemed high as a kite,” the defendant could argue that those were not damaging descriptions as one his defenses. But being falsely called a felon or a liar is automatically damaging.

Somebody sent a screenshot of Kovler’s tweets to Berenson. Berenson sent out a message to his substantial audience of Substack followers – now that he’s been banished by Twitter, this is his main method of communication. He titled his post “Reason one billion I need to be back on Twitter.”

Berenson wrote of Kovler, “This bluecheck, who has over 100,000 followers, has never spoken to me. Twitter is happy enough to let people libel me (“liar” is a red-flag libel word) and to profit by selling ads against those tweets, while violating my California and First Amendment free speech rights by preventing me from answering.”

This would seem to present a beautifully clean test case. Kovler said, “I spoke to Berenson a bit. Guy’s a professional liar.” Berenson said that Kovler “has never spoken to me.” They cannot both be true. Kovler calls Berenson a “liar” and either Berenson is lying or Kovler is.

After Berenson sent out his substack message, his many fans started blowing up the post thread. They demanded to know the circumstances under which Kovler “spoke” to Berenson.

The Globe reached out to Berenson to confirm that he had never spoken to Kovler. Berenson replied, “No. He has never emailed me (I searched for his name) and we have never spoken on the phone.” Berenson supposed that the nearest they ever came to communicating is when Berenson replied to a thread about the Israeli data on Covid deaths “more than seven days after the second dose” but they didn’t interact directly or communicate one-on-one. I personally wouldn’t consider being a member of a large group in which someone else was a member and both having expressed an opinion in that group to qualify as having “spoke” to each other.

Kovler told the Globe that “I hadn’t meant to suggest we’d chatted on the phone. He used to retweet my stuff about Covid in Israel and misrepresent it. I objected to the misrepresentations while defending the basic content.” Kovler included an example from a tweet of his from Feb. 14, 2021 that showed him replying to @AlexBerenson that reads “Yes I’m not on your side. Making deliberately misleading statements so you can troll people on the Internet is so 1998.” The Globe doesn’t know if Berenson replied to that or even saw it, and it’s not clear whether doing so would constitute the two having “spoken.” 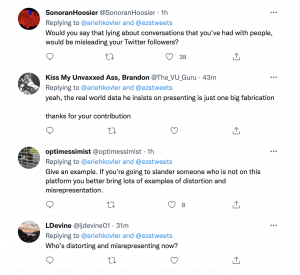 After massive pushback on Twitter from Berenson partisans, Kovler backed down a little bit. He wrote, “To be clear, we interacted here on Twitter. Wasn’t trying to claim some special back channel to the dude, who is now both hinting he’s going to sue me and ironically complaining his 1A rights are being violated…”

That’s not ironic at all, actually. But the real stakes of this discussion are not mentioned by either Kovler or Berenson.

Berenson points to this one-way exchange as Reason Number 1 Billion he needs to be back on Twitter. I agree that he belongs on the platform (though I am mystified about why it’s so important to him). To me, what it proves much more is Reason Number 1 Billion that Twitter—and all social media platforms, but especially the monopolist ones—need to lose the elaborate protections of Section 230.

(I will note for the sake of disclosure, as I have before, that I’ve been friendly with Berenson since we both became financial journalists in the late 1990s.)

The problem here is not that Kovler can libel Berenson, and Berenson cannot reply. That happens every single day in every publication. When Alex worked for the New York Times, he could write about a company and they didn’t have some sort of inalienable right to respond in The New York Times. But that’s just it — the New York Times is a publication. If Berenson wrote something libelous in the Times, such as calling a person a liar, that person would be able to sue Berenson and The New York Times for libel. There would be discovery of their intent, and evidence presented in front of a jury of thoughtful peers, who would decide if a line had been crossed and if damages were in order. That’s the way a civilized system works.

On Twitter where many commentators have audiences far larger than even The New York Times, a guy like Kovler can say whatever he wants, and not only is he virtually unsueable—because who knows how much assets he has and a bunch of other practical and technical reasons—but Twitter, which has massive resources and enabled Kovler to reach that audience, is also not liable. That’s because of the protections of Section 230.

Twitter cannot both be a publisher—meaning they decide what gets published and what does not, and that Covid skeptics like Berenson are not worthy of a platform but Covid maximalists like Dr. Fauci are—and also be protected from repercussions for that view from its users who actually libel others.