The former New York Times journalist and multiple best-selling New York Times author Alex Berenson has been permanently banned from Twitter. Berenson has become well known for his contrarian opinions about COVID-19. In general, he is a vaccine skeptic and lockdown opponent. He has taken the position that the damage done to the economy and to the psychology of children and by the vaccine has been under-weighted and the damage done by the disease itself has been over-weighted.

Let me state near the top of this article that I have nowhere near enough science background to weigh in meaningfully about whether he is right or wrong. And although I’ve been friends with Berenson since we both became financial journalists in the late 90s, I can’t even say whether his obsession with this topic means he’s onto something seriously wrong with the conventional wisdom or if he’s just gone mental. I can report that his interest in medicine and science is deep and long-standing. When my then-wife needed brain surgery to remove a benign but large and potentially lethal tumor, Alex and his wife were among our visitors and his intense interest in her diagnosis and treatment were both real and touching. So I have no idea if his conclusions, or even his data, are accurate.

But I can say with authority—and so should you be saying with equal outrage—that a monopoly platform denying his followers the opportunity to hear an alternate viewpoint is way more dangerous than the potential harm of whatever supposed misinformation he is spreading. If it even is misinformation.

This is scary as fuck and it’s got to stop.

Twitter’s point of view is that Alex Berenson is not the official arbiter behind the science of this dread disease. Well, neither is Twitter.

A few months ago Twitter users were forbidden from saying the origin of this disease is man-made. Scientists who disagreed were harshly punished. A few days ago our own government arrived at the conclusion that a man-made origin is at least as likely as not. Information changes. Our understanding of science changes. Forbidding reporters—forbidding anyone, actually—from participating in the open, passionate debate that’s required to reach consensus doesn’t help people “trust the science.” It has the opposite effect.

When one knows he is not seeing all points of view, one doesn’t trust the consensus that emerges. These constant analogues that are raised — “should we give equal time to people who believe the earth is flat?” — are disingenuous and dangerous. The reason we know and believe the earth is round is because the question was ferociously debated. And let’s recall that the side favoring what turned out to be true was very unpopular during Galileo’s time period. Had the operators of Twitter been around in the time of Copernicus and snuffed out the madman view that the earth was round, our understanding of this topic may have evolved very differently. 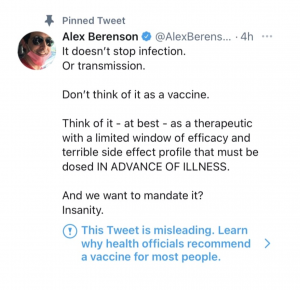 Berenson told the New York Post, “We have reached a dangerous moment. Social media companies that have audiences which dwarf any other are now actively censoring reporters at the behest of governments. I will continue to fight to get out the truth and am considering all legal options.”

This isn’t the first time Berenson has been targeted by Big Tech. Last summer, Amazon halted sales of his book, Unreported Truths About COVID-19 And Lockdowns Part 1: Introductions and Death Counts and Estimates. The retailer claimed the book—you can imagine what it was about from its title—did not comply with the company’s guidelines. This notion — that a monopoly bookseller will sell only books with which it agrees—should terrify all of us. Especially the tattletales on Twitter, the ones who respond to Berenson’s tweets by saying “@Jack, when are you going to do something about this menace.” It’s a Stasi mindset. Our ability to tolerate the existence of viewpoints we don’t share has evaporated.

In that instance Amazon quickly backed down. The controversy probably helped Berenson sell a few extra books. Twitter has revealed, over and over—from gigantic misfires like banning a President who was supported by 75 million Americans while permitting the Taliban, to declining to “blue check” the California Globe because the program is “closed” while allowing anti-Trump New Yorker writers to attain that status in minutes—that it’s a partisan operation. Hopefully, real competition like Gettr will continue to emerge. (Follow us @CaliforniaGlobe on both Twitter and Gettr, just saying.)