Results for the 2021 California Gubernatorial Recall Election will be coming in over the next few hours, days and perhaps even weeks.

As the voting results start coming in after voting closes at 8 PM on the West Coast, California Globe has several political commentators weighing in, as well as from Katy and Evan.

The Recall Election ballot questions are:

Shall GAVIN NEWSOM be recalled (removed) from the office of Governor?

CA Globe contributor Thomas Buckley: A few thoughts on what the initial numbers could mean.

First, it is widely expected that the numbers that come in between 8 and 9 pm will reflect the tally of most of the vote-by-mail ballots.  It will not be all of them, as those that arrive at registrars’ offices today will most likely be counted later this week.

Exactly what percentage of this first block of votes will be of the total number cast is not exactly clear, but a safe assumption would be rather more than half (reports of heavy in-person turnout mean that it could be a smaller percentage than expected).

It is also assumed that the first vote bunch will tilt pro-Newsom, or NO on the recall.  If it does not, the governor is in for a long night; conversely if the NO vote shows a significant lead, it would spell trouble for the recall.

Second, an interesting number to watch will be the difference between the votes cast on the recall question and the number cast in the replacement question.  The larger the difference, the better for Newsom as that could indicate his message of “Vote No, Don’t Vote” worked.

Finally, one county to watch may be Imperial, as its final vote percentages matched very closely the overall state vote in both Newsom’s 2018 victory and Biden’s 2020 win, possibly indicating bellweather status.

Or I could be completely wrong.

Over 1/3 of the people who signed the California recall petition were not Republicans; they were Decline to State voters, Independents and Democrats.

This recall election is a wake up call to the state and its elected officials.

It’s 7:55 and the polls haven’t closed yet. We aren’t expecting any big announcement right away, but will update as soon as there are results posted.

As the Globe reported, the Globe was told by many long time California voters showed up at the polls only to be told “you already voted.” Some reports are saying this happened only in LA County. But voters in other counties contacted the Globe with similar experiences.

Results are coming in more and more at around 8:10 P.M. Anti-recall will likely be out to a big lead at first, so the real excitement will come from all the in-person voting, which tends to skew Republican. It’s past 8 now and really all we can do is wait and see.

Katy Grimes: Really surprised at this:

This was Tweeted at 8:13PM on Recall Election night, 13 minutes after the polls closed. How? https://t.co/7FBSn0tS09

Initial counts across many counties indicate at least one part of Newsom’s message may have worked – his call to “Vote NO, Don’t Vote” seems to have been heeded by a surprisingly large percentage on the electorate, with vote total differences between question 1 and question 2 in the 35 percent range.

As to Imperial County, the mail-in vote shows NO a healthy lead, but it should be noted that turnout will be less than in either past two elections.

KTLA is reporting on county results, without showing the percentages of votes in: 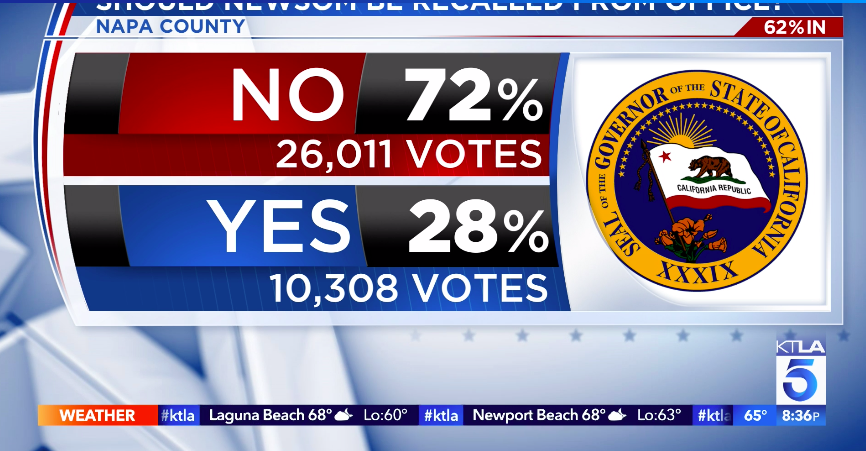 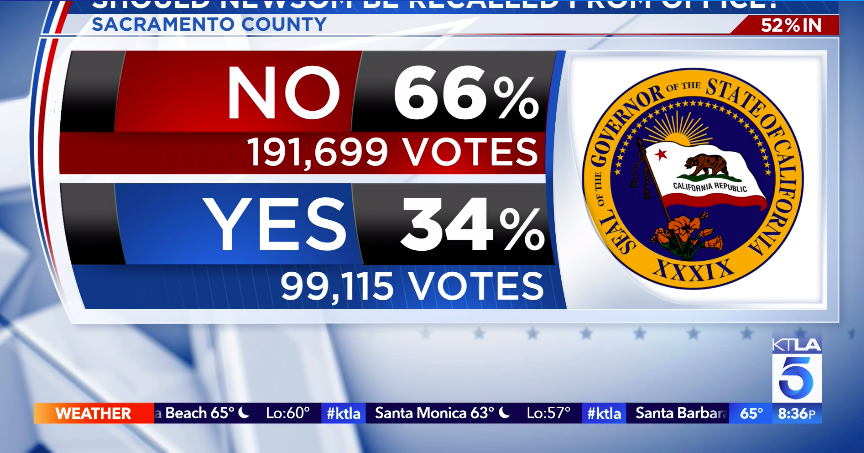 Katy Grimes: At 8:46 we received this email from the California Labor Federation:

“Tonight our shared values as Californians emerge not just intact, but stronger than ever. By a landslide, Californians rejected calls by right-wing Republicans to roll back decades of progress on worker protections, including the minimum wage, paid family leave, health and safety, and immigrant rights.

California Media declared victory for @GavinNewsom immediately after polls closed at 8:00pm.
Reps/Dems/Ind./NPP voted in person overwhelmingly on Election Day, and 100's of thousands of others mailed ballots in by Sept. 14th. Yet those ballots go uncounted. @CaliforniaGlobe

Judging by county reporting status, it seems as if nearly all of the mail-in vote (that arrived before today) statewide has been counted and tallied, with NO taking 67 percent and YES 33.  That number will tighten considerably, but if more than half of the total vote was mail-in, YES on the recall would have rack up big numbers to close the gap.

That being said, while the Newsom camp can be pleased that it appears to have held about 90 percent of state Democrats in line so far, it has to be troubling that he appears to be in, so far, a virtual tie – at best – amongst No Party Preference or “independent” voters.

The vast majority of the numbers to come in for the rest of the evening will be the in-person vote; mail ballots that arrived today, provisional, damaged, etc. ballots are typically not processed until later in the week.

They haven’t counted all of the in-person votes from today, or the mailed votes. It’s just like the 2016 primary called for Hillary in CA right when the polls closed.

Both the Republicans and Democrats, especially the Gubernatorial races later this year and primaries next year, are going to be looking at this election as a blue print. Democrats know now to focus more on COVID-19 issues in blue states while Republicans know exactly how the Dems try and play the mandate issue in elections and who they can pick in primaries to go around the issue

Major support from known party members has also been shown to be a bigger help than usual, so we may see more of that in upcoming races thanks to the recall proving their worth once again.

Newsom gave his victory speech earlier invoking former Senator Bobby Kennedy. In particular, Newsom noted “But I’m reminded of something, I don’t know, a few decades ago, someone told me when describing a difficult and challenging moment. Said the ‘The world is too small, our time is too short, and our wisdom is too limited to win fleeting victories at other people’s expenses.’ And he went on to say ‘We must all triumph together.’ So in that spirit of recognizing and reconciling this moment and trying to understand what’s going on not just here in the state but all across the United States of America, I just want to say this; tonight I’m humbled, grateful, but resolved in the spirit of my political hero, Robert Kennedy, to make more gentle the life of this world. Thank you all very much, and thank you to 40 million Americans, 40 million Californians, and thank you for rejecting this recall,” he said.

Tonight, California voted NO on the recall and YES to…
Science.
Women’s rights.
Immigrant rights.
The minimum wage.
The environment.
Our future.

We rejected cynicism and bigotry and chose hope and progress.

Only 60% have been reported so far, and if that gap get be closed a bit, the victory may not be as grand as they hoped. We’ll see.