Since 2012, California politicians and the High Speed Rail Authority have wanted to build any part of the California High-Speed Rail system in order to get $3.5 billion in federal stimulus money. The various plans looked more like a whack-a-mole game. But every hole plugged, every detail softened or tweaked, and every cost estimate that is changed has only caused bigger problems.

Since 2012, the HSRA has been violating important mandates in the 2008 law.

Proposition 1A, $9 billion in bonds for high-speed rail, included numerous mandates, none of which can be legally bypassed on the way to building the massive train system. The HSRA has ignored the initiative mandates, as has the Legislature.

Top on the list is that the rail system must be high-speed. “Electric trains that are capable of sustained maximum revenue operating speeds of no less than 200 miles per hour,” the law states. However, much of the first segment planned between Fresno and Bakersfield was not high-speed, nor would be high-speed be attainable in dense cities.

Yet then-Rail Authority Chairman Dan Richard said numerous times at legislative hearings since 2012 that the Rail Authority “never intended, nor does the business plan does contemplate that we would operate a high-speed rail system only in the Central Valley.”

There is actually a much bigger story here. Not only did the federal government say they are pulling the $928 million, but they said they are not going to cooperate with the project going forward at all. Yet the HSRA continued to say that in order to complete the project they need a federal partner.

This means that the HSRA will not be able to meet the December 2022 deadline for matching the $2.55 billion in federal dollars they have already spent, at which point California is on the hook for paying the federal government back, or the federal funds will likely be withheld for other projects and programs.

“The more we look at this project, the more uncertainties come to light,” said Senate Republican Leader Shannon Grove (R-Bakersfield). “Whether it is the loss of federal funds, the looming deadlines, or the failure to comply with the requirements of Proposition 1A, these hearings have proven beyond a shadow of a doubt that the California High-Speed Rail Authority is incapable of building anything that resembles what they promised the voters.”

“Sacramento Democrats can no longer pretend they don’t know this project is off the rails. It is a shameful waste of taxpayers’ dollars and we must stop throwing our hard-earned money down the drain. It is time to kill the big rail fail,” Grove added. 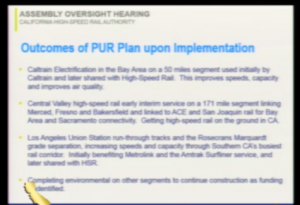 Also on Tuesday, Gov. Newsom filed a lawsuit against the Trump administration over the Federal Rail Authority plans to terminate a grant of $928 million for the state’s high-speed rail project, charging that the federal government’s decision to pull the grant agreement “was precipitated by President [Donald] Trump’s overt hostility to California, its challenge to his border wall initiatives, and what he called the ‘green disaster’ high-speed rail project.”

President Trump called for California to return all federal rail funding in February, following Gov. Gavin Newsom’s state of the state address where he announced he planned to pull back on the high-speed rail project, saying, “there simply isn’t a path to get from Sacramento to San Diego, let alone from San Francisco to LA.” However, Newsom also that the high Speed Rail leg from Madera to Bakersfield in the Central Valley would be completed in order to use the allotted federal funds.

Not long after Newsom’s announcement, the Federal Department of Transportation announced that the agency would cancel the grant of $928 million previously authorized, but not yet paid to California.

“Members of a state-appointed peer review panel and the Legislative Analyst’s Office said the Newsom plan faces a wide range of risks that could affect its construction cost, funding and future ridership,” the Los Angeles Times reported. “Lou Thompson, chairman of the peer review panel, noted that the plan would require a large bridge loan to complete construction by 2027, since some of the funds for the work would not arrive until 2030. The loss of the $929-million grant is another unknown.”

Assemblyman Vince Fong (R-Bakersfield) asked, “Is this project viable? Can it be done without more funds from the public?” Fong asked.

The HSRA acknowledged in the hearing that without federal cooperation they cannot meet that deadline, and they have no contingency plan.

What continues to be ignored by the rail authority and the media, are the violations to the legal mandates in Proposition 1A:

* Prop. 1A stipulates 11 requirements that must be met before funds can be released for the construction of a “corridor” or “usable segment.”  Specifically, some of these requirements include actual high-speed train service, ridership, revenue projections and planned passenger service.

* “The high-speed train system shall be planned and constructed in a manner that minimizes urban sprawl and impacts on the natural environment,” the law states. But the impact of the rail system may actually create suburban communities around train stations within reasonable distances from urban areas and higher employment areas.

The train system will also dissect both urban and rural communities which will be problematic, as well as a serious violation of the “natural environment.” The trains will travel through densely populated cities, but also through sensitive agricultural and natural areas in the state, many areas which are still in litigation.

* The success of any legitimate transportation system must be based on connectivity. “For each corridor described in subdivision (b), passengers shall have the capability of traveling from any station on that corridor to any other station on that corridor without being required to change trains,” the law states. “Stations shall be located in areas with good access to local mass transit or other modes of transportation.”  This means that unless there are extensive connecting rail systems already in place in the high-speed rail destinations, cab companies, limo services and car rental companies should be lining up to rent space in the train stations. Commuters will not have the necessary train and bus systems in which to transfer with the plan.

* The California High-Speed Rail Authority must have all of the the funding ahead of time, before any construction starts on a new segment.

* The high-speed train system must operate on its own entirely, and in the black. That means operating profitably, and includes caveats of no government subsidy. The plan relies heavily on a projection of 100 million users by 2030, a notion that was created with manipulated data.

Assemblyman Fong hammered away at the fact that the HSRA does not and will not have the necessary funding to complete the Merced to Bakersfield leg by 2020. If it does not, the federal government will clawback all of the federal funds provided to California. “We are all making decisions on imperfect information, but the more information we get, the more the project seems imperfect,” said Fong.

Despite this lack of federal funding, HSRA Chairman Lenny Mendoca continued to say how transparent they were over the missing funds, and how important it is for the federal government to partner with California on High Speed Rail, leaving lawmakers on the committee scratching their heads. What was clear is the HSRA is angling for more state subsidies and funding.