While Dr. Fauci and elected politicians continue to debate the right to celebrate All Hallows Eve due to ongoing Covid concerns, celebrities have returned after a seemingly endless summer of Hollywood Hypocrisy. They have done so both to excite and anger horror fans on the screen while Alec Baldwin successfully terrified America in reality.

American Horror Story: Double Feature debuted proving the twisted mind of Ryan Murphy is a bottomless pit of carnage filled brilliance. The horror anthology has been hit with criticism for the past few seasons for various blunders and lack of onscreen talent, not to mention the disastrous summer season of American Horror Stories (an off-shoot from the original series) that did nothing but enrage fans. However, the return of Francis Conroy, Evan Peters and Sarah Paulson for season 10 of AHS immediately silenced critics, proving that Murphy still has the ability to entertain the masseswhile brutalizing their sensibilities in the process. AHS: Double Feature was split into two unrelated story arcs – Red Tide and Death Valley, each story receiving half the season. The former explores the emergence of vampires in Provincetown in which Leslie Grossman gave her best AHS performance to date while the latter takes on the existence of extraterrestrials and government coverup surrounding Area 51.

Both of these story arcs offered something AHS has lacked since its heyday of Asylum and Coven: Honest and compelling social commentary without overt political partisanship, successfully disturbing its viewers in every episode. It reminded the audience that Murphy is not only sick in the head but he can prove it in new and entertaining ways, specifically having an alien blow up the head of the First Lady of the United States with a simple raise of their hand.

There is something for every political propensity in Double Feature – men being impregnated by aliens, woke Gen-Zers being brutally murdered, the onscreen portrayal of conspiracy theories regarding government cover-up of aliens, the promotion of transspecies rights and the subtle labeling of most journalists and writers as sophomoric vampires, desperate enough to sell their souls and murder the masses for mere adoration. 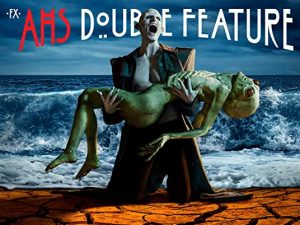 The final scene in Death Valley, although criticized by fans, is particularly poignant as it leaves the viewer in an existential wonderment. Overall, the scene considers the philosophical quandaries that have plagued humanity since the beginning of time: Are we inherently good or evil? Are we capable of being more than we are? Why do these questions plague our souls and intrigue our intellects?

Now for the bad news.

Halloween Kills was a disaster in every respect except its box office numbers and the talent of Jamie Lee Curtis, who carried her costars through 105 minutes of overt political messaging and more gruesome deaths than most of the Halloween franchise combined. It became the highest grossing R-rated film since the pandemic hit, almost reaching $50 million in its debut weekend, beating expectations against a budget of $20 million.

The reboot of the Halloween franchise from Danny McBride and David Gordon Green was received in 2018 positively by both critics and fans, praising the direction, concept and phenomenal acting chops of Jamie Lee Curtis and her costars Judy Greer and Will Patton. The return of Curtis playing Laurie Strode in Haddonfield, Illinois proved that this Queen of Scream was second to none. For a hard left, well-to-do, politically progressive Curtis to play a PTSD ridden, alcoholic gun enthusiast 40 years later was nothing short of brilliant, proving both the actor’s range and commitment to her iconic role.

However, the second installment veered from its most valuable asset (Curtis) and was a gory mishap of epic proportions.

The film tries to wow fans by bringing back the original cast members of the 1978 horror hit Halloween with the return of Anthony Michael Hall as Tommy Doyle, Kyle Richards as Lindsay Wallace and Nancy Stephens as Marion Chambers. Sadly, all it proved was why Kyle Richards became a real housewife, not an actress. It was impossible to see anything but the belle of Beverly Hills being thrown up against an SUV by her neck, leaving the viewer wondering if Lisa Vanderpump called Michael Meyers for hired merk hit.

The story was rushed and awkward as the movie attempted to be something it’s not in its nonstop bloody and largely spookless endeavor, save the iconic score which continues its inherently creepy feels. These easter egg attempts at paying homage are dutifully inserted between the 30+ kill count of Michael Meyers’ murderous rampage. While the climax of most slasher films is the death of villain, Halloween Kills lays tradition by the wayside for tired tropes of beleaguered politicking.

The climax was a forced commentary on societal rage, a maladroit attempt to cram in the writers’ partisanship.

John Carpenter, Halloween’s original creator perfectly juxtaposed the horror genre: “There are two different stories in horror: internal and external. In external horror films, the evil comes from the outside, the other tribe, this thing in the darkness that we don’t understand. Internal is the human heart.”

Unfortunately for Halloween Kills, neither the external or internal horror was achieved. The actual antagonist, Michael Meyers, was nothing more than the Covid pandemic in the room, indiscriminately killing people as the message of “the evil in the human heart” never achieved lift-off.

The scene meant to convey the “internal villain” was set at a hospital where the townspeople are carrying their figurative torches. As they are caught into a cultic chant of “Evil Dies Tonight”, they are convinced that the villain is in the hospital and they need to destroy him before he kills them, trying to force the viewer into believing that these frightened people are the problem, not the mass-murdering psychopath who was busy brutally butchering the gay couple now living in his childhood home, something that naturally outraged the woke twitterati.

Apparently, as Curtis has since said in an interview with Eli Roth, this scene was meant to depict the protesters at the capitol riot of January 6th. Effectually, all it accomplished was fantasy depicting a false reality created by fanciful narratives from an unrealistic media.

The final installment of this new Halloween trilogy is set to hit the big screen next fall. Unfortunately for fans, Green has already informed the audience that this final film is set four years after Halloween Kills, addressing both the pandemic and the world after it. Clearly, the story of Michael Meyers and the insidious relationship he has with Laurie Strode is not enough for Masters and Green.

If the stories above aren’t enough, Hollywood finishes October with a real horror.

In a tragic accident that has left both the media spinning and onlookers horrified, Alec Baldwin shot and killed cinematographer Halyna Hutchins on the set of “Rust” last week, a movie for which Baldwin also serves as executive producer. According to police reports, Baldwin was given his gun and told that it was cold (unloaded). He aimed it at the camera and fired what he believed was a blank shot, shooting both Hutchins and director Joel Souza in the process. Hutchins died en route to the hospital, leaving Baldwin distraught and everyone wondering how this possibly could have happened. In the reports, affidavits and investigations since, rumors of a toxic work environment, defective safety procedures and other misfires happened before the event.

As one would expect, liberal media outlets immediately seized on the story, defending the actor while casting any blame they could away from him. This is a rare moment where the calls for gun control legislation have not come blaring  from the likes of CNN, WaPo, MSNBC or the NYT.

In like fashion, conservative personalities were quick to make the point that the first rule of gun safety is the “the gun is always loaded,” implying this was entirely Baldwin’s fault. Overall, there was not much sympathy for the situation from the conservative media toward Baldwin, most likely due to his politicization of every issue and his rampant Trump hatred for the past five years, not to mention some questionable tweets about guns that are now literally haunting the SNL Trump impersonator.

Be it the genius of television, the disappointment of film or the tragedy of reality, Hollywood did everything but bore its audience this year. Midnight Mass premiered on Netflix to the terror and adoration of its viewers, creating a new genre of theological thriller in a tale that is both soul-disturbing and beautifully written, deserving an article to itself. Malignant was a total bomb and complete waste of everyone’s time. The Scream 5 trailer wowed the audience, giving them a January to hope for. Antlers premiers today after 18 months of delays and it’s anyone’s guess how that is going to go.

During the season of things that go bump in the night, Americans received more treats than tricks and for that, Hollywood gets a slow clap for doing the good things great, the bad things mediocre and the tragic things politicized as ever. Bravo to the beautiful.