It’s just before dawn, June 1, 2020. Smoke lingers in the streets of Washington D.C., obscuring the view of the nation’s Capital. The streets are littered with now defrosted water bottles and firework debris that had been used to assault law enforcement officers hours before. Anarchic graffiti can be seen on the plywood of boarded up shop windows that had been looted. Saint John’s Church, a house of worship frequented by many of the nation’s past Presidents still smolders from a fire lit the night before. A federal secret service building is blackened by flames. The barricades were replaced outside the walls of the White House after a night of violent chaos. This night would live in infamy as an emblem of months of rioting throughout the country that saw dozens of murders, billions in damages, federal buildings set ablaze and small businesses destroyed forever. The mainstream media news chyrons read “Mostly Peaceful Protests.”

It’s just before dawn on January 7th, 2021. As the House and Senate finished certifying the election, the events leading to this moment would also live in infamy. Several windows in the Capitol building had been smashed. Dozens of offices throughout the congressional building had been ransacked. Our nation’s leaders were safely evacuated before dozens of the fiercest rioters entered the chamber without any meaningful opposition from law enforcement. As most wandered aimlessly around the Rotunda, a woman named Ashli Babbitt was shot and killed by a capitol police officer in a hallway close by, marking the singular and tragic death of the January 6th riot. Several others were sent to the hospital sustaining mild to moderate injuries. The news chyrons read, “Insurrection at the Capitol”. 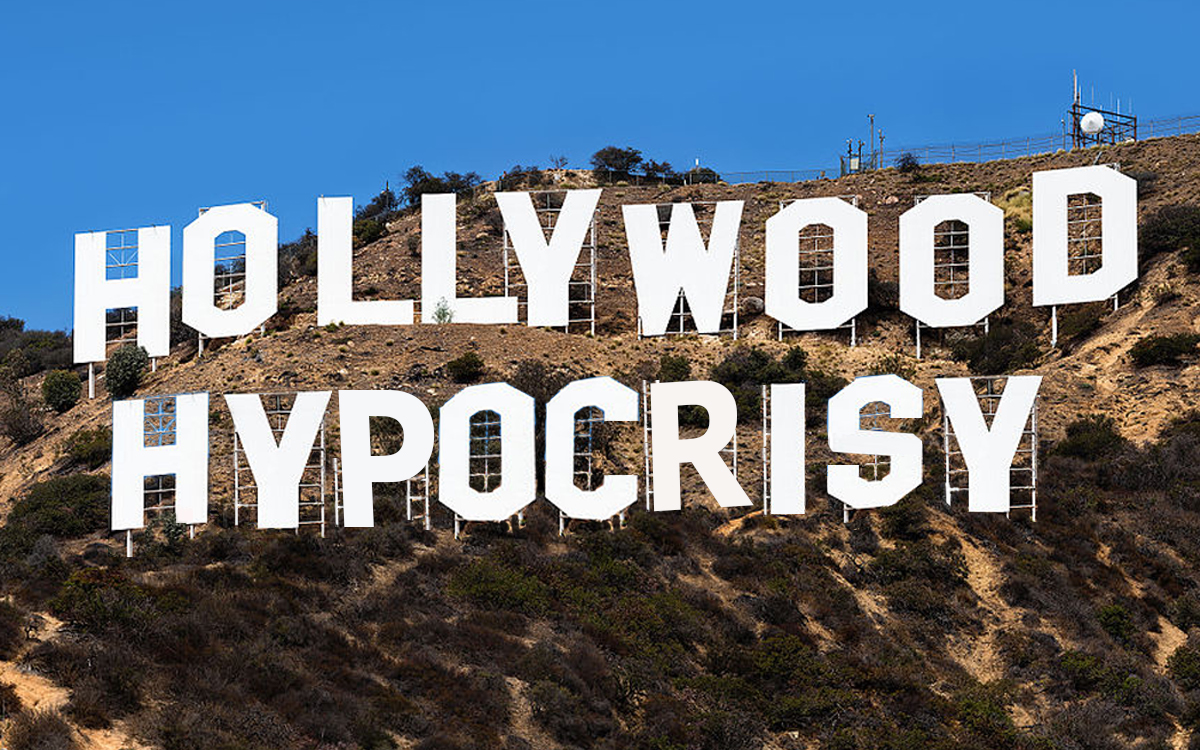 However, Hollywood’s reaction to these examples of violent insurrection and protest, bolstered by a biased media, would have the American onlooker believe that the former represented progress, while the latter was the darkest moment in American history since the Civil War. The former was justified as it carried the banner of Black Lives Matter while the latter was an affront to democracy as it carried the banner of Make America Great Again. So justified was the former that stars from Tinseltown, aided by the current Vice President Kamala Harris, bailed out insurrectionists after they committed burglary, assault, battery, arson and murder.

The examples of hypocrisy from these stars is vast. Seth Rogen, Steve Carell, Chrissy Teigen, Patton Oswalt, Cynthia Nixon, and all of the typical actorvists, ad nauseum, took to social media last year to support the riots happening all over the country. They did this by donating to the Minnesota Freedom Fund, an organization that helped provide bail to rioters. One of the more astonishing takes came from Gabrielle Union after the D.C. insurrection last May. Having already seen the destruction she stated, “It’s not enough to just say that Black Lives Matter. You have to show it.” BLM apologist Colin Kaepernick had this to say: “In fighting for liberation there’s always retaliation. We must protect our Freedom Fighters.” Other celebrities like Halsey and Jennifer Lopez attended BLM protests knowing full well that once the sun went down, they would likely devolve into riotous disasters.

Regarding the January 6th riot, not one person was charged or arrested for treason, sedition or insurrection. Almost all were arrested for trespassing, not the litany of other violent crimes committed during the assault on D.C. and elsewhere that took place in wake of the George Floyd Riots. This violent act at the Capitol was decried universally. Yet, it led to a six-month occupation of thousands of National Guardsman in D.C. as barbed wire fences were erected to protect the Capitol from protests that weren’t happening. Some of these measures are still employed today. Even though most of the rioters and insurrectionists from the night in D.C. last May were released having most charges against them dropped, some of the rioters from January 6th have been held without bail for months while enduring solitary confinement. Hollywood approves of this.

After their support of violent criminals beating cops and setting fire to federal buildings, they decried the violence at the capitol with breakneck speed. Rob Reiner, Stevie Wonder, George Takei, Seth Rogen and many others live tweeted and instagrammed their takes in an almost coordinated fashion using words such as “extremists” or “insurrectionists.” Patton Oswalt referred to the rioters as animals.

how the fuck is Donald Trump still president after
a) inciting this
b) telling these animals that he “loved” them? https://t.co/OLw34lbuKZ

To this day, these elitist Hollywood actors maintain their perspective. Debra Messing tweeted July 28, “Republicans protect the blue unless it’s a coup.” Mark Hamill posted a side-by-side picture of capitol police officers and congressional republicans with the header “Heroes vs. Zeroes.” Both of these stars supported calls to defund the police during the riots last year. Now they apparently idolize law enforcement. Other celebs who remain inconsistent on this matter as they comment on the January 6th commission include Rob Reiner, Trevor Noah, and Ben Stiller.

Trying to unravel the disconnect is futile because it’s an exercise in doublethink. A violent, murderous, destructive insurrection which found its virulent participants assaulting the Secret Service at the gates of the White House is a “mostly peaceful protest.” A mostly peaceful protest that became violent and was ended completely within hours, seeing very little destruction comparatively is a “violent insurrection.” Such is the way of the woke.

As mentioned in numerous previous articles, this is another example of the story arc of Hollywood politics: The DNC takes a position on a particular issue, the establishment media bolsters said position and Hollywood acts as the bludgeon as the message is spread to the masses. They all fail to realize that in order to maintain a coherent position, either both examples are to be accepted as justified expressions of protest or they both are to be rejected in totality. Their hypocrisy continues to reign supreme and their message is abundantly clear: Insurrections for me, but not for thee.

5 thoughts on “Insurrections for Me, but not for Thee”