Home>Legislature>California Gas Prices Causing Spike in National Average
05 May 2019 2:05 am

California’s high gas prices are behind the spike in the national average cost of a gallon of gas. California’s average price of $4.096 is up 44 cents from a month ago and 46 cents from a year ago, according to AAA.

In April, California Globe addressed the rise in gas prices more than eight weeks in a row in California, and has followed legislation impacting the oil and gas industry.

In April Gov. Gavin Newsom asked the California Energy Commission for an analysis of the state’s gas prices by May 15. Many smirked at his request, but he is correct to ask. However, California lawmakers have demanded explanations for high gas prices in the 1990s, early 2000s and 2006, but received little information.

Most recently, a group of California legislators asked California Attorney General Xavier Becerra to investigate. Sen. Ben Allen (D-Santa Monica) wanted to know if it was oil company gouging, or something else.

Severin Borenstein, faculty director at the Energy Institute at the University of California, Berkeley’s business school has researched the mystery gas surcharges: “there’s also a mystery surcharge on California gas: In the past few years, the price gap with other states has jumped much more than costs and taxes can explain.”

“Part of that difference is due to higher taxes,” Borenstein wrote in October 2018. “And part is our cleaner-burning fuel – adopted in 1996 to cut unhealthy smog – which costs more to make.” 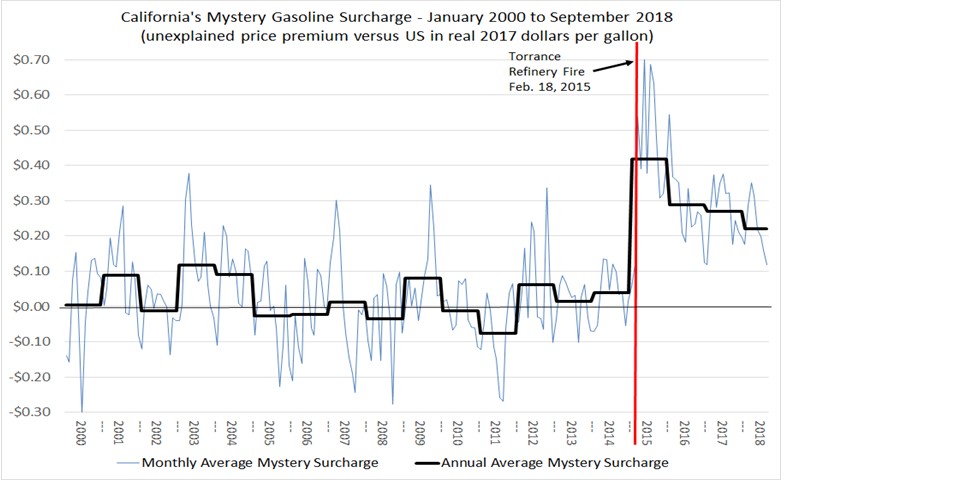 “Then there are the fees to address environmental impacts, both climate change and local pollution. The state’s cap-and-trade program on greenhouse gases has added 12 cents a gallon this year, and our “low carbon fuel standard” has pushed the price up by about 8 cents. Most analysts think that producing our smog-reducing gasoline formulation costs no more than 10 cents extra. By the way, it is also one reason you can now see the mountains from downtown Los Angeles. Finally, we pay 2 cents to clean up old gas station sites where fuel leaked into the soil.”

“When you add up those taxes, fees and extra production costs, Californians are paying about 58 cents a gallon more than the average American. That’s real money considering that we use about 1 gallon of gasoline per person per day.”

“…the mystery surcharge, which has been about 22 cents a gallon this year. That surcharge – above the difference in taxes, fees, and production costs – averaged 2 cents from 2000 to 2014 and was never more than 12 cents in any of those years. But everything changed in 2015.”

Borenstein said that since February 2015 this mystery surcharge “has cost Californians more than $17 billion, or about $1,700 for a family of four. And none of those dollars has gone to building infrastructure or helping poor families.”

In 2015 the mystery surcharge was around 48 cents a gallon. “What was more disturbing was that it continued at unprecedented levels in 2016 (29 cents) and 2017 (27 cents), long after the Torrance refinery was back at full production.”

By May 15 we may know more about this mystery surcharge.