The 60 percent increase in Kindergarten through 12th grade spending in California’s schools, just since 2011 hasn’t made a difference in student performance. And it’s apparent the money isn’t making it into the classroom. The three large school district’s teachers have held strikes because of this: “Los Angeles, Oakland and Sacramento have gone on strike because so little of that extra money is going to them,” David Crane recently reported. Crane is now a lecturer in Public Policy at Stanford University and president of Govern for California, and served as a special adviser to Governor Arnold Schwarzenegger 2004-2010. 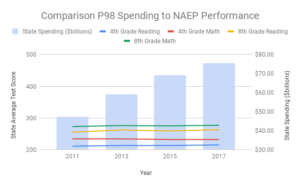 An extra $28 billion per year of spending didn’t make a difference.

Crane notes that “K-12 is the largest General Fund expenditure and governed by the Education Code,” because of Proposition 98, passed in November 1988, which guarantees a minimum of 40 percent of California’s general fund spending.

“That’s not a surprising outcome to anyone who knows where the money went (substantially to increases in spending on unfunded pensions and insurance subsidies for retirees on Medicare) and how schools are required to be managed under the Education Code (not for the benefit of customers; ie, students),” Crane added.

Gov. Gavin Newsom addressed this in his State of the State speech in February. Newsom said his administration will invest more than $80 billion in our schools, which includes $576 million for special education. “We’re still 41st in the nation in per pupil funding,” Newsom said. “Something needs to change. We need to have an honest conversation about how we fund our schools at a state and local level.”

However, according to Lance Izumi, Director of Education at the Pacific Research Institute, the problem is more with former Gov. Jerry Brown’s Local Control funding Formula spending scheme. “According to Ed Voice, CalFacts.org, the per pupil spending is actually over $17,000 per student,” Izumi said. “CalFacts.org source is the Legislative Analyst’s Office. And according to CalFacts.org, California would rank 29th, not 41st,” Izumi said.

Izumi added: “With the LCFF, the money goes down to the school districts but there is no accountability – if the money is going to old failing programs or to new programs. And secondly, most of the money big districts spend is going to pensions and benefits for employees. For LAUSD, the Reason Foundation 2018 Evaluation of LAUSD’s Fiscal Outlook, they calculated that 57 percent of the LCFF is just going to three items – pensions, retiree health benefits, and special education, before one dollar is spent in the classroom – Just as David Crane said.

Crane said: “Schools shouldn’t be robbing young teachers to subsidize the insurance of retirees covered by Medicare and they should be run like every other enterprise patronized by Californians, including yourselves, which means for the benefit of customers.”