California is run by a progressive elite who have decided to sacrifice the aspirations of ordinary residents on the altar of utopian dreams. It’s not working, but they’re doubling down, and at this point there’s no end in sight.

The laws they’ve passed in virtually all areas make it harder for individual Californians to succeed. Astronomical costs for housing and tuition; utility and gasoline prices that are the highest in the nation, and unaffordable to far too many; regressive, often embedded taxes that make everything more expensive, from food to telephone bills; laws that make California a magnet for welfare recipients and undocumented immigrants; laws that create an exploding population of homeless; laws that release thousands of criminals onto the streets. All of this makes crime more likely.

California’s political dysfunction is directly responsible for making the state unaffordable for middle class families. The so-called “housing crisis,” the most visible and harmful manifestation of California’s housing inaccessibility, is precisely the result of California’s policymakers inviting the welfare cases of America and the expatriates of the world to move here, at the same time as they’ve enacted environmental policies that make it extremely time consuming and expensive to build anything.

There is a parallel dysfunction in California, also entirely the creation of the political elites who run this state. That is the near impossibility of efficiently policing the state. Members of law enforcement contend with powerful transnational gangs, often sheltered from arrest by sanctuary laws. They contend with burgeoning populations of the homeless that now dominate some of California’s most cherished public spaces. How many of these homeless would find refuge with families or friends if laws didn’t prevent vagrancy enforcement? How many of them would find entry level jobs to pay a living wage if laws hadn’t made housing prohibitively expensive?

And then there are the common criminals, to be found everywhere, and bound to be numerous in a state with over 40 million residents. Here too, law enforcement in California fights an uphill battle in the fight against ordinary crime thanks to “progressive” state legislation.

The turning point in California’s progressive assault on law enforcement was the passage of Prop. 47 in November 2014. Supported by nearly all Democratic politicians, a smattering of naive libertarians, the ACLU, and several unions including AFSCME and SEIU California, this ballot initiative was misleadingly marketed as the “Safe Neighborhoods and Schools Act.”

Ostensibly to empty the jails of expensively housed “nonviolent” offenders, unintended consequences were felt immediately. Over four years later, the negative consequences of Prop. 47 continue to compound and intensify.

Here are some of the impacts of Prop. 47:

Downgrading drug and property crimes has led to what police derisively refer to as “catch and release,” because suspects are only issued citations with a court date, and let go. Many of them don’t show up for their court dates. Habitual offenders know they are no longer vulnerable to the “three strikes” statutes. They know that even repeated misdemeanor convictions are unlikely to land them in jail for very long. Even the liberal Washington Post reported on the impact of Prop. 47 as “A ‘virtual get-out-of-jail-free card’”

California’s generous welfare and inviting sanctuary policies, combined with unaffordable housing and the most forgiving winter climate in America, mean a large homeless population is inevitable. Prop. 47, which releases inmates from prison at the same time as it makes it harder to incarcerate new offenders, inevitably adds rather than decreases the total population of California’s homeless. Recent estimates put the number of homeless in California at nearly 140,000, with the largest number, approximately 55,000, in Los Angeles County.

The concentration of homeless in Los Angeles isn’t just because it is the largest city in the state. It’s also because in 2006, the notoriously liberal 9th U.S. Circuit Court of Appeals in Jones v. City of Los Angeles ruled that law enforcement and city officials can no longer enforce the ban on sleeping on sidewalks anywhere within the Los Angeles city limits until a sufficient amount of “permanent supportive housing” could be built. And as the city bureaucrats fitfully apply grant funds that apparently can’t construct a basic apartment for much less than a half-million each, police are forced to permit massive and permanent homeless encampments which have become havens for criminals of all kinds.

Policing has become tough everywhere in California. As if the fallout from Prop. 47 and rulings such as Jones v. City of Los Angeles aren’t bad enough, now there’s something new: the “The Racial and Identity Profiling Act of 2015.” This law, supposedly intended to address dubious claims, especially in California, of discriminatory policing, has made it even more difficult for police to do their jobs. Each year, police departments are now required to submit to the State of California an annual report of their “stop data.” The following table, drawn from this report, shows the “Officer Reporting Requirements.” 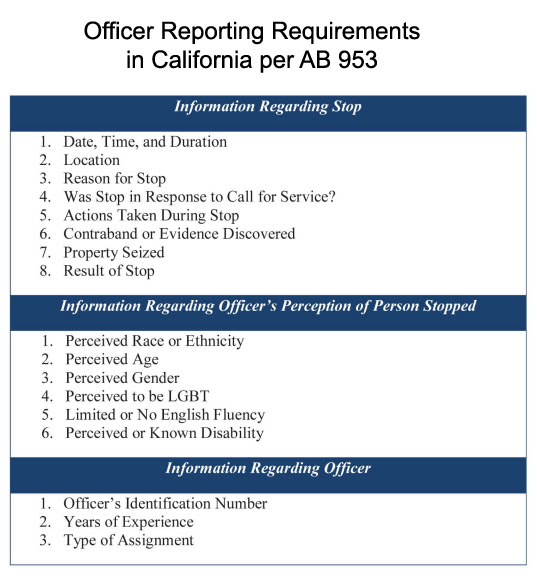 When it comes to the practical effect of AB 953, it’s hard to find anything good. Every single time they interact with a citizen officers have to input 17 variables into a form that is either paper (four pages, requiring reentry into a database), or onto a tablet, cell phone, or in-car laptop. The mere fact that this is a time consuming process will prevent a police officer from making as many stops during a normal shift, and may deter them from even making some stops. Worse, the data collected is designed to either prove or disprove that officers in any given police department are stopping a disproportionate number of citizens who are members of “protected status groups.” Needless to say, officers, and their departments, may become reluctant to exceed their “quotas,” and as a result have an incentive to not make stops when stops are warranted.

This sort of meddling in the day to day actions of police officers does not serve the community, and is demoralizing to officers.

This focus on trying to prove that a disproportionate number of African American, Latinos, or other “people of color” are being “profiled,” has little or nothing to do with appropriate police oversight. There are over a million sworn police officers in the United States. It is statistically impossible for a population of individuals that large to not have a few bad apples. For this reason, and others, police tactics and police oversight should constantly evolve, and they do. But laws like AB 953, which pressure police into bringing their “stops” into conformance with ethnic and religious quotas, ignore the disproportionate reality of crime statistics, and further tie the hands of law enforcement.

The last thing California’s lawmakers should be doing is making it harder for police to police. But that’s exactly what they’ve done. Things may have to get much worse before they get better.