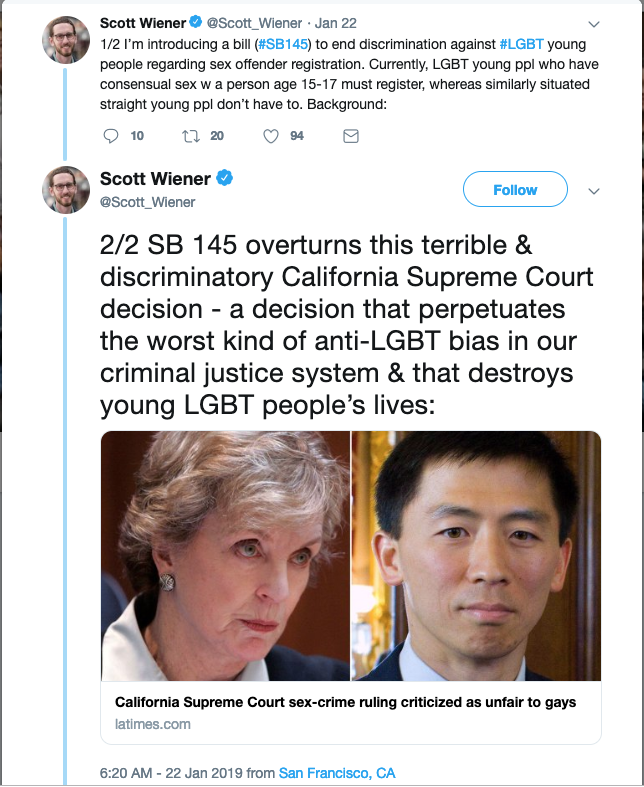 The 2014 Proposition 47 reduced penalties for property crime and transformed some felonies into misdemeanors. The 2016 Proposition 57 barred prosecutors from directly filing juvenile cases in adult court. Senate Bill 1391, effective January 1, forbids prosecution of 14- and 15-year old criminals as adults, whatever the gravity of their crime. A new measure now takes the trend of leniency to a new level.

Senate Bill 145, by Sen. Scott Weiner, San Francisco Democrat, and Assembly Member Susan Eggman, Stockton Democrat, would shield sexual predators who target children from having automatically to register as a sex offender. That is a requirement of the Sex Offender Registration Act, amended by Proposition 35, from November 2012, as California Globe reported. A willful failure to register is a misdemeanor or felony, depending on the offense.

SB 145 would add a section to Section 290.55 of the penal code as follows: “A person convicted of an offense specified in subdivision (b) may, by writ of mandate, seek discretionary relief from the duty, imposed as a result of that conviction, to register pursuant to the act if, at the time of the offense, the person is not more than 10 years older than the minor, as measured from the minor’s date of birth to the person’s date of birth.”

The proposed measure does not specify heterosexual or homosexual sex, but it would allow an adult of 25 to sexually exploit a minor of 15. Sexual predators of 19 could target nine-year-olds, and those 21 could target eleven-year olds and escape automatic registration. Whatever one thinks of the registration measure, the Weiner-Eggman measure is novel is several ways.

Californians will search hard to find a law that mandates leniency based on an age gap between criminals and victims. Tanner Wood of Rocklin, California, was only 14 when he killed his sister Ashley, who was 13. The narrow age gap and family relation did not reduce Wood’s sentence of 16 years to life, recently upheld by Sacramento judge James Arguelles.

Robert Alton Harris was only ten years older than the two 16-year-olds he murdered in San Diego in 1979. The age difference was not a mitigating factor and nobody argued that it should be. Harris drew a death sentence, carried out in 1992.

In current law vaginal intercourse between a minor and partner within 10 years of age is illegal but does not require registration as a sex offender. That practice, according to Wiener, disproportionately targets young LGBT people, who usually cannot engage in vaginal intercourse. Californians might mount a search for cases in which the disinclination or inability to engage in any activity impinges on criminal charging, sentencing or registration.

Wiener’s office contends SB 145 would result in the “equal treatment of straight and LGBT young people and end the stigmatization of LGBT sexual relationships.” Weiner is on record that “Discrimination against LGBT people is simply not the California way. These laws were put in place during a more conservative and anti-LGBT time in California’s history.”

Californians, conservative and otherwise, have good cause to see SB 145 as special treatment for one group, on dubious grounds.

Meanwhile, Proposition 47 launched a wave of property crime in San Francisco and other cities. Proposition 57 granted a new hearing to convicted double murderer Daniel Marsh, with no new exculpatory evidence. Under SB 1391, juvenile murderers can expect to serve only until age 25.

Evidence that such leniency reduces crime remains in short supply. If Californians thought SB 145 might encourage sexual predators it would be hard to blame them. A date has yet to be set for a hearing on the measure.