The California Democratic Party, governed by identity politics, may have a problematic issue attached to a new state Senate bill: “#CrackerChronicles” and racism.

The current executive director of the institute is Dr. Anthony Asadullah Samad, who has a Twitter feed that includes some questionable hashtags.

This is not an isolated event; this is just one example of Samad’s use of #CrackerChronicles hashtag. And he has others (below) supporting African American Communist Angela Davis, who won the Lenin Peace Prize and ran for vice president on the Communist Party ticket.

While his Twitter feed initially appears to be a personal account, there is a link to his Twitter feed from his biography page on the Institute’s website, appearing to give his personal feed and personal views CSU approval.

But more importantly, use of the tag “#CrackerChronicles,” which many could consider to be racist and hostile, would seem to suggest that Dr. Samad may not be the best person to lead a state-funded higher education institute. 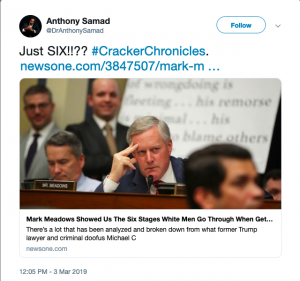 Oddly, the bill’s author, Sen. Steven Bradford, is also on the Mervyn Dymally Institute’s advisory board, making this bill ethically dubious, since he is authoring a bill to give his own organization money.

Will Democrats look for a new director for this program, or perhaps a different California State University to house it?

Complicating this situation, Dr. Samad was also convicted of loan fraud in 1990 and just last year, the Carson-Torrance branch of the NAACP urged Cal State Dominguez Hills to remove him as the head of the school’s institute because of “past sexual harassment allegations.”

According to the Daily Breeze, “Samad was dismissed from the 2011 suit after settlement talks began in 2013, according to court documents that do not disclose details of the settlement. But Samad confirmed that the employer, which was charged with allowing the harassment to continue for years, reached a settlement in 2015.”

Vincent Burr, president of the NAACP’s Carson-Torrance Branch noted, ““Everybody needs to be forgiven for things done in the past but, because of how he dealt with this young lady, his behavior needs to be addressed. This man had baggage before he was appointed, so my question is: ‘Did (Cal State Dominguez Hills President) Willie Hagan do his due diligence when he made this appointment?’ ”