Republicans in Southern California had set up the ballot drop off boxes at churches, gas stations and gun shops, California Globe reported earlier this week.

It was obvious that Becerra and Padilla, both Democrats, were attempting to intimidate the California GOP into submission by claiming their ballot drop boxes were illegal. But as California Globe explained, this is not illegal.

In 2016 the California Legislature and Gov. Jerry Brown ostensibly “legalized” ballot harvesting, allowing a third party to collect ballots and deliver them to election officials, eliminating the ballot protection law that allowed only a family member to return another voter’s ballot.

Assembly Bill 1921 now allows anyone to return an absentee ballot.

In the “cease and desist” letter, Attorney General Becerra accused the California Republican Party of election tampering: “Anyone who tampers with the vote is tampering with free and fair elections.”

GOP attorneys sent a response letter to the Attorney General and Secretary of State in response to the “cease and desist” order, pointing out:

“the program that you now falsely claim to be illegal, is a perfect example of what you “proudly” stated to be permissible just last year.”

“The California Republican Party opposes ballot harvesting, and wishes you had enacted adequate ballot security provisions after the laws were changed.”

It was painfully clear that Attorney General Xavier Becerra and Secretary of State Alex Padilla were wrong about the legality of the ballot drop off boxes, as the GOP attorneys unequivocally spelled this out in their letter (below).

“Despite their client’s rhetoric in the press, we’ve been in communication with legal counsel for the California Republican Party and they have committed to a number of significant concessions in their ballot collection activities,” said Secretary of State Padilla.

Hector Barajas, spokesman for the California Republican Party, responded to the news:

“The Secretary of State and Attorney General didn’t know the facts and didn’t bother to learn them before accusing us on Monday. We can’t agree to not do something we weren’t doing to begin with. They could have shortened this press conference by simply saying ‘Sorry.’

“The California Republican Party made no concession to the Attorney General or the Secretary of State. In fact, in two phones calls with 9 Attorney General lawyers, they never requested the California Republican Party to do anything except provide information about our program and to turn over records, including names of voters which we have declined to do.

“This is a thuggish voter intimidation and vote suppression tactic by our Democratic Attorney General and Secretary of State.” 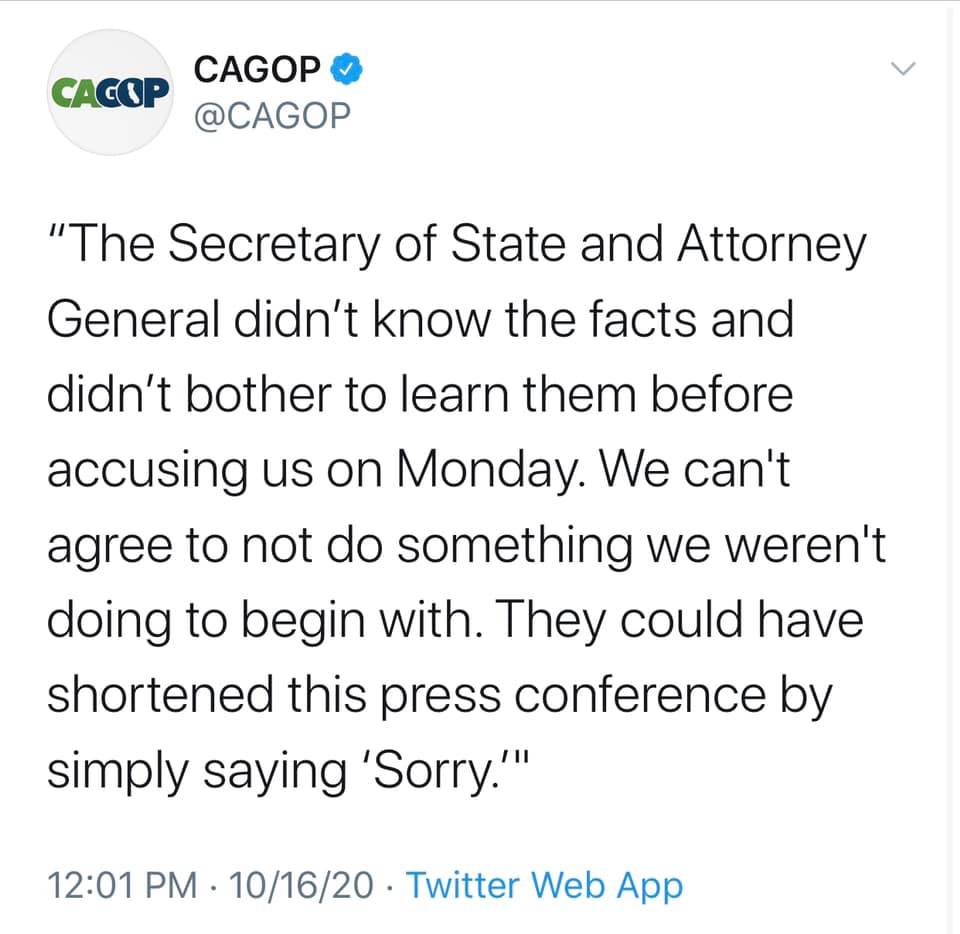 Republican State Sen. Melissa Melendez has been adamant during this dust up that the boxes are legal and will remain. She did not disappoint after the AG and SOS announcement: 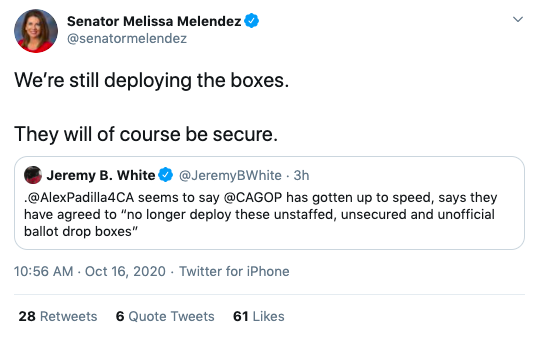 Here is the letter by GOP Attorney Tom Hiltachk to Becerra and Padilla: 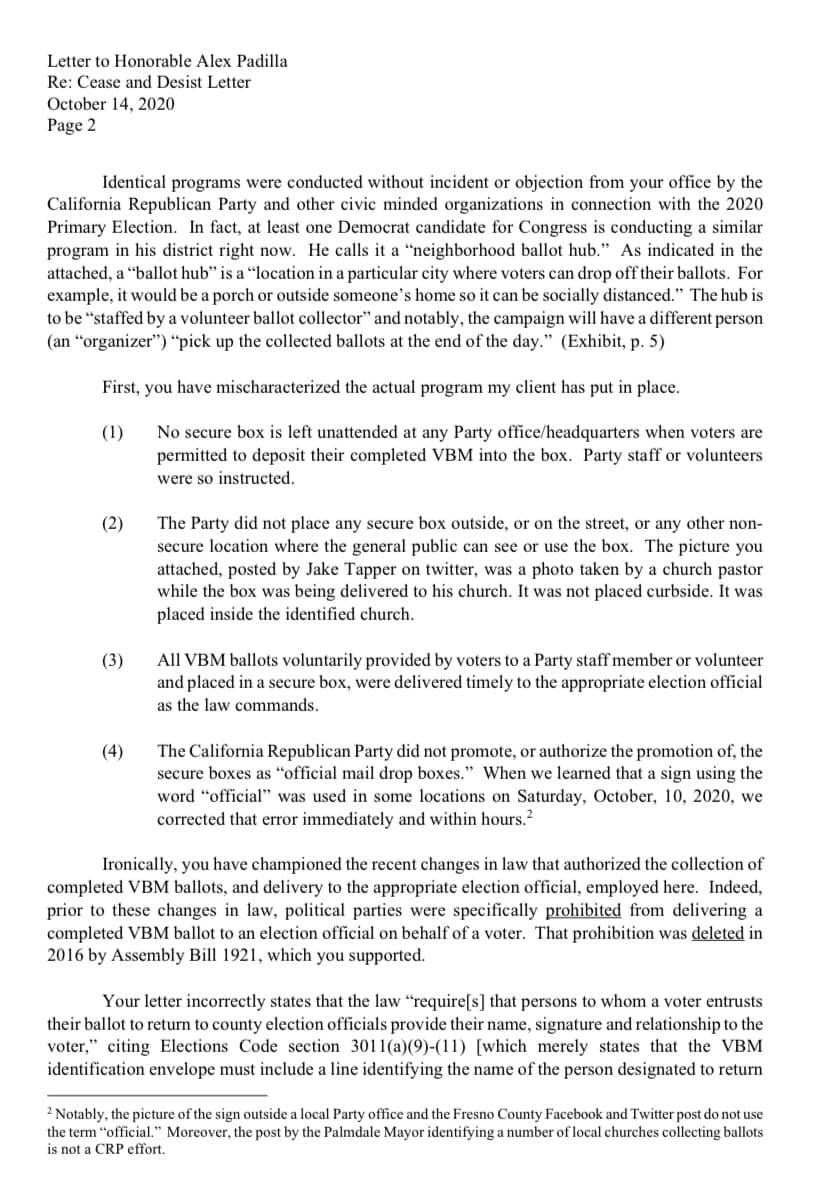 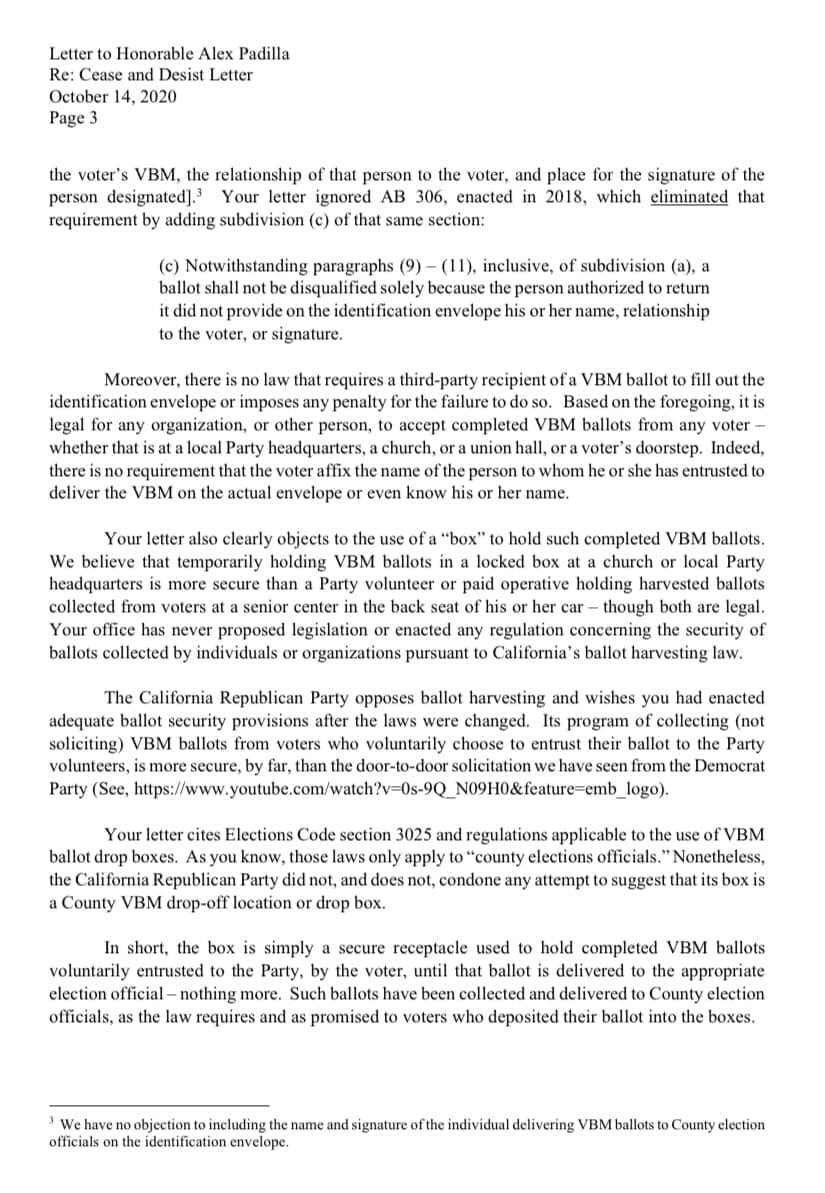 In September, U.S. Reps. Tulsi Gabbard (HI-02) and Rodney Davis (IL-13) introduced H.R.8285, the Election Fraud Prevention Act, a bipartisan bill that aims to improve the security of the mail-in ballot process, and calling for the end of ballot harvesting.

“The strength of our democracy lies in the integrity of our elections,” said Rep. Tulsi Gabbard. “Whether in the midst of a pandemic where mail-in voting is likely to drastically increase, or in a normal election, no one should get in between a voter and the ballot box. While some states have prohibited vote harvesting, many states lack any regulations that would stop third-parties from fraudulently collecting and mishandling ballots as has occurred in recent elections. Our bipartisan bill incentivizes states to take action and prevent any political parties or any third-party special interest groups from interfering with our sacred right to vote.”

“Banning ballot harvesting shouldn’t be a partisan issue,” said Rep. Rodney Davis. “Allowing any individual, including political operatives, to pick up multiple voters’ ballots and deliver them to a polling location undermines the integrity of our elections. We’ve seen ballot harvesting widely used in states like California and a recent court case in North Carolina outlined the clear opportunities for fraud and coercion with the ballot harvesting process. This bipartisan bill will encourage states to ban this process that is ripe for fraud and is a major threat to the integrity of our elections.”