Thousands of parents and grandparents traveled to the California State Capitol Monday from all across California to protest SB 276 which would disallow the vaccination medical exemptions parents were receiving from family physicians, and its companion bill SB 714, hastily gutted and amended, and disingenuously shoved through the Assembly and Senate without any policy hearings.

Several protesters were arrested for blocking the entrance of the State Capitol parking garage.

The bills would order the California Department of Public Health to investigate and discipline doctors who grant more than five medical exemptions in a year, in schools with immunization rates under 95 percent.

California Globe interviewed many of these protesters. The majority are not anti-vaccination parents; they are protesting the State’s rigid mandatory vaccine schedule, and the attempt by the Legislature to disallow medical exemptions, even for already vaccine-injured children.

Except, of the fraudulent exemptions cases that the Medical Board of California has investigated to date, there have been no fraudulent medical exemptions found.

SB 276, by Sen. Richard Pan (D-Sacramento), was jammed through the Legislature last week at record speed, despite Gov. Gavin Newsom saying he had his own set of amendments he wanted included.

So SB 714, also by Sen. Pan, was gutted and amended (see graphic below) over the weekend to include the Governor’s changes. On Monday the bill was bypassed by the Assembly which had suspended the rules to do this, and voted on in the Senate within hours.

Presenting SB 714, Sen. Richard Pan said it was “agreed to in the Assembly.” Sen. Jeff Stone (R-Temecula) asked for the bill to at least be heard in the Senate Health Committee prior to the Senate voting on it, warning “SB 714 is going to be a mockery of democracy,” to not have one policy hearing. His motion was shot down 27-11 along party lines. Following the vote, a man sitting up in the Senate gallery shouted, “You’re killing our children.” He was promptly removed by the Capitol police.

“We are talking past each other,” Sen. John Moorlach (R-Costa Mesa) said. He noted that members of the Senate seemed more concerned about bobcats than children with anaphylactic shock received from vaccines. “This bill is now vindictive,” he added. “This Legislature is even scaring our medical community.”

Sen. Moorlach spoke passionately about his cousin’s son Robby, who was developmentally disabled, never learned to talk or walk. “Having a disabled child is a full-time obligation… that’s what these people fear,” he said. He asked colleagues to consider the potential of allergic reactions infants and toddlers can have from vaccines, before they voted on SB 714.

The Latin inscription emblazoned over the dais of the State Senate Chamber says, “Senatoris est civitatis libertatem tueri” — It is the duty of the senators to protect the liberty of the citizens, Sen. Brian Jones said. “This is an abuse of power, and an abuse of the legislative process. There is no impeding crisis today.”

Jones asked Senate colleagues what the crisis was that required lawmakers to “ram through this process.”

“A couple thousand people came to a hearing with their vaccine-injured children,” said Sen. Jeff Stone, a pharmacist. He said at the hearing in which he was the chairman, seeing the vaccine-injured children really resonated for him that while rare, there are children who suffer lifelong disabilities from reactions from vaccinations. “Allow the exemption process to continue,” he said. “It’s less than once percent… these parents are trying to protect their children.” He said the few vaccine exemptions granted would not have any impact on the herd immunity of communities.

“The cure is worse than the disease itself for some,” Stone said. “Give parents a peace of mind. I’m begging you, vote no on SB 714.”

Sen. Jones, pleading with Senators “to withdraw SB 714 and petition the Governor to veto SB 276,” quoted Thomas Jefferson to make his point: “A Prince, whose character is thus marked by every act which may define a Tyrant, is unfit to be the ruler of a free people.”

BREAKING: The Assembly coauthor of #SB276 admits there are no fraudulent medical exemptions – the bill was written based on lies. #VetoSB276 #SB714 https://t.co/USbMCw36Zv

Her Tweet elicited many responses, such as this one:

Did you seriously just say “yet”?! I thought this bill was created because of all the fraudulent MEs?! I’m so glad the co-author of the bill has admitted that NO fraudulent MEs have been found!! @GavinNewsom . how much more do you need before you #VetoSB276

I received four vaccines as a child. Today’s children receive 50 doses by age six, and 69 by age 18. The Centers for Disease Control reports that one child in six in America suffers with learning and behavior disorders while millions more suffer with asthma, diabetes and other chronic allergic and autoimmune diseases, likely related to vaccinations.

Recently, in a California Globe op ed, Attorney Mary Holland asked, “When a physician decides that a child is too medically fragile to receive a vaccine, but is not allowed to submit a medical exemption because it is not a listed CDC contraindication, and that child suffers a life-threatening reaction, such as multiple seizures or encephalitis (both listed on vaccine manufacturer inserts), is the doctor liable, or the state official who denied the exemption?”

Sen. Pan has not answered this question to date. However, he says his bills are needed to “keep children safe from preventable diseases.”

Newsom’s amendments will grandfather in all medical exemptions prior to January 1, 2020, when SB 276 goes in to effect. However, a student who previously received an exemption would need to obtain a new exemption before entering kindergarten or 7th grade, or when newly enrolling in a school district or school.

“This legislation provides new tools to better protect public health, and does so in a way that ensures parents, doctors, public health officials and school administrators all know the rules of the road moving forward,” Newsom said in a statement. 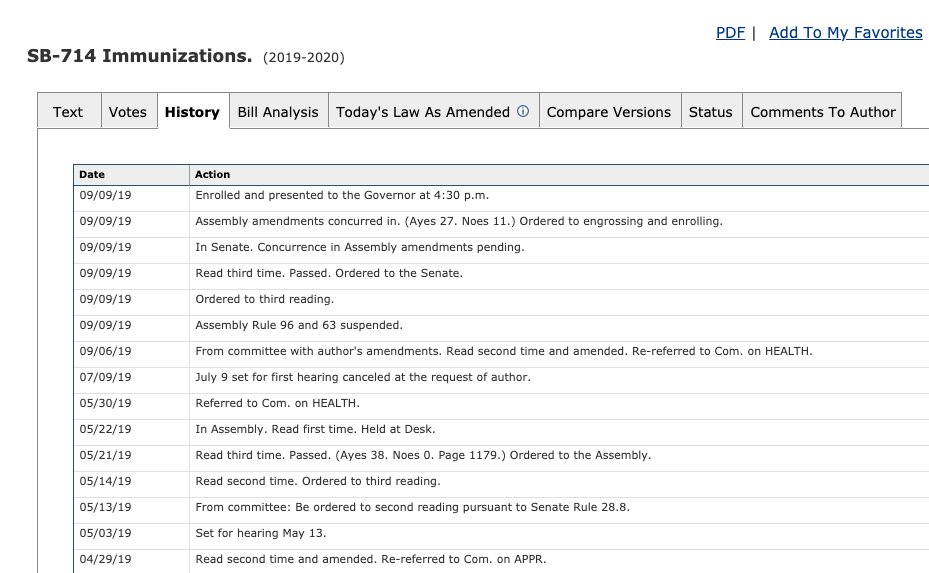 74 thoughts on “Bill to Disallow Vaccine Exemptions Passes: ‘SB 714 is going to be a mockery of democracy’”