Another memo was issued Friday by Assembly Speaker Anthony Rendon and Sen. Pro Tem Toni Atkins telling Capitol staffers that despite 85% of State Capitol legislators and staffers having been vaccinated, “it’s not good enough.”

The Capitol leaders say, “We realize there is more to do, and that starts with getting vaccinated. Everyone in the Capitol Community who can receive the vaccine should, and as quickly as possible. We are rapidly approaching the end of session, and none of us want to see a replay of what COVID-19 exposure caused last year— even more, no one wants to see another member of the Capitol Community get sick.”

As we reported last week, the New Civil Liberties Alliance and a panel of legal and medical experts explained during a two-hour discussion that “Voluntary” Vaccine Passport Programs Are Coercive. “The mandate itself completely undermines trust in public health,” said Dr. Jay Bhattacharya, epidemiologist and professor of medicine at Stanford University. “Like ‘if the government is forcing me, then what’s wrong with it?’”

Dr. Bhattacharya’s statement and question also apply to the State Capitol leadership: Why are they forcing the vaccine on employees?

According to the Centers for Disease Control and Prevention, Overall US COVID-19 Vaccine rates are at about 50% of the country, with the most important age group, 65-and-older at 88.6% with at least one dose; 78.9% have had both doses.

Here is the CDC’s vaccine report by age group: 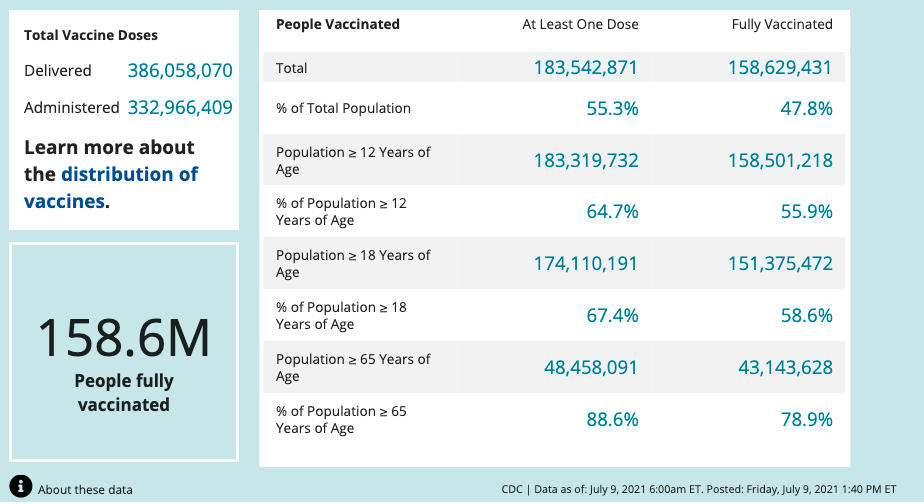 So why are State government leaders demanding more than 85% of Capitol employees get the vaccine?

They don’t really say why they are coercing subordinates to take the vaccine. What they are doing is unethical at the very least. If the staffers don’t want to take the vaccine, the bullies in charge should immediately cease harassing them to do it – particularly since 85% already have been vaccinated.

Importantly, the Globe was informed that there are many Democrats in the Capitol who don’t want to take the vaccine. Are they being threatened by leadership with their jobs?

The Globe was informed by employees with the City of Sacramento that the city is moving forward with a vaccine passport system/database for all city employees.

We contacted city officials with these questions, which apply to the State Capitol leaders as well:

With all of the scientific research available about masks not preventing the spread of this virus or any other, why is the city requiring unvaccinated employees to be masked?

Has the city asked employees for proof of antibodies if they had COVID, if the city is concerned about the spread? What about all of the people testing positive for COVID who were already vaccinated? Of the nine State Capitol staffers who just tested positive for COVID, half were already vaccinated. And they were masked in their offices inside the Capitol, which is limiting members of the public to visit.

Aren’t employees being singled out and marked with a scarlet letter if forced to wear a mask, regardless of their health status?

And what about herd immunity? Many practicing physicians say we’ve already reached herd immunity, with the 60.2% of Californians vaccinated, combined with the rest of the population who were exposed to the virus, or already had and recovered from COVID-19.

Perhaps it is time for Capitol leaders to lay their cards on the table because ruling by fear isn’t cutting it, and 1) show proof of their own vaccination status to their colleagues and staff, and lead by example; and 2) present the “science” they are using to justify bullying staff into getting vaccinated. Because what they are doing is trampling on Capitol employees’ civil and constitutional rights.

In a normal, healthy work environment, no one would care who has been vaccinated and who hasn’t since we always vaccinate to protect the individual, not someone else. Yet public health officials (and State Capitol leaders) keep telling us we are selfish if we don’t take the shot “for others.” That’s just not “science.”

Most honest Human Resource managers will explain that an employer who requires employees to receive a vaccination is vulnerable to discrimination claims on the grounds of disability, age, religion or belief. One lawsuit has already been filed by a public employee claiming that employers can’t mandate a vaccine that is approved only for emergency use.

As NCLA Litigation Counsel Jenin Younes said during the panel discussion last week, as for our Constitutional rights being set aside, they (government employers) have to show “compelling government interest.”

“Legal balance has to be struck. And the specter of government overreach needs to be addressed.”