While most states remained fairly static from last month, California did improve very slightly from 7.6% to 7.5% unemployment.

The ten states with the highest unemployment are Democrat-run States:

The ten states with the lowest unemployment are Republican-led States:

Newly released data for August from the Bureau of Labor Statistics demonstrated that Republican Governors and legislatures are doing a more effective job of getting Americans back to work. The top states have very low unemployment, with Nebraska at the lowest at 2.2%.

The unemployment rates in Nebraska, South Dakota, Georgia, and Montana are lower or at the same level they were when the pandemic began. Seven states—Arkansas, Iowa, Nebraska, North Dakota, South Dakota, Utah, and Wyoming—did not issue orders directing residents to stay at home from nonessential activities in response to the coronavirus pandemic, Ballotpedia reported.

Jobs are rising and unemployment is lower in states with Red states largely because these states reopened early from the COVID lockdowns, or did not shut everything down. And these states are not paying residents to sit home and collect unemployment or welfare checks as California has done, right up to the recall election.

The RNC boiled down the BLS statistics even more: 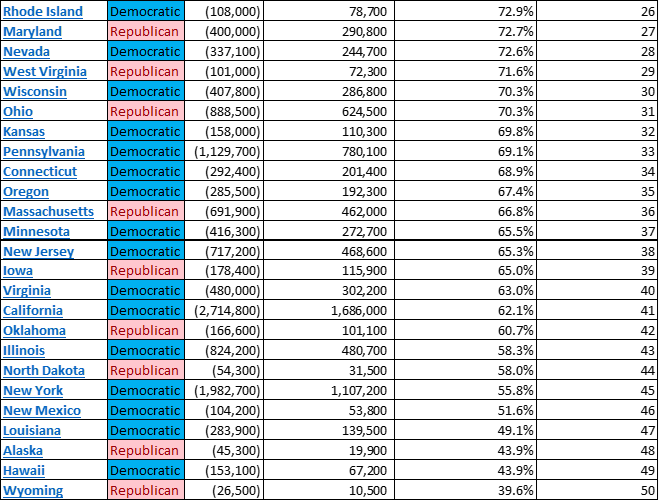 Only 14 Democrat-run states have recovered at least two-thirds of their lost jobs, according to BLS data, and the Foundation for Economic Freedom. “The system has offered many unemployed households the equivalent of $25/hour in benefits for staying home. As FEE reported, many conservative-leaning states that canceled the benefits early.