Everyone in California agrees that water policies need to adapt to changing times. There is even growing agreement that enforcing draconian reductions to farm water allocations (which will eliminate all but the most powerful corporate agribusinesses) and outlawing household outdoor watering will not only fail to solve the problem, but is a tough and undesirable solution. And so the debate over more rationing versus more water supply projects goes on.

Missing from the debate over water policy in California, however, especially among the state legislators who need to do something about it, are some basic overall metrics regarding how much water we need, what various types of water projects cost, how much potential capacity each type of project delivers, and how much energy is involved. Here’s a summary.

When quantifying macro variables of this nature, first it is important to note that for any project category, costs are not uniform. A wastewater recycling plant, for example, will cost more to construct and more to operate depending on the type of wastewater it has to process. The cost to build and operate a conveyance to deliver water from a recycling plant or desalination plant direct to the consumer or to a storage facility will vary depending on the length of the conveyance and any necessary elevation changes. So these are rough numbers. They are nonetheless vital to begin a more informed discussion of water policy options in California.

The primary measurement used to describe large amounts of water are units of one million acre feet (MAF). To provide an overall perspective, in a wet year, up to 300 MAF of rain falls within California’s borders. With the exception of the upper Klamath Basin, and a few lesser examples, California’s geography is such that our watersheds are roughly congruent with our state border. In a dry year, as little as 100 MAF of rain falls in California. This rainfall either percolates, transpirates, evaporates, or runs down the streams and rivers to the ocean.

Also each year, Californians currently divert about 75 MAF as follows: about 8 MAF to urban water consumers, 34 MAF to farmers, and 34 MAF of “environmental water” to maintain wetlands, river ecosystems, and the health of the Sacramento-San Joaquin Delta. These numbers represent the seven year average between 2011 and 2018 as reported by the California Dept. of Water Resources.

During these same seven years, to divert 75 MAF each year, California got 5 MAF from the Colorado River, 19 MAF from groundwater extraction, 15 MAF from reuse and recycled water, 6 MAF from federal water projects, and 7 MAF from local water projects. For much more details on what’s behind these numbers, refer to the 2018 update of the California Water Plan.

To harvest more water from increasingly unpredictable rainfall, to recycle more water that would otherwise be treated and released into the Pacific, and to desalinate brackish water inland and ocean water on the coast, here are some cost estimates. As an aside, this is a hypothetical plan. Do not be alarmed. Plans change. Let’s all work together. 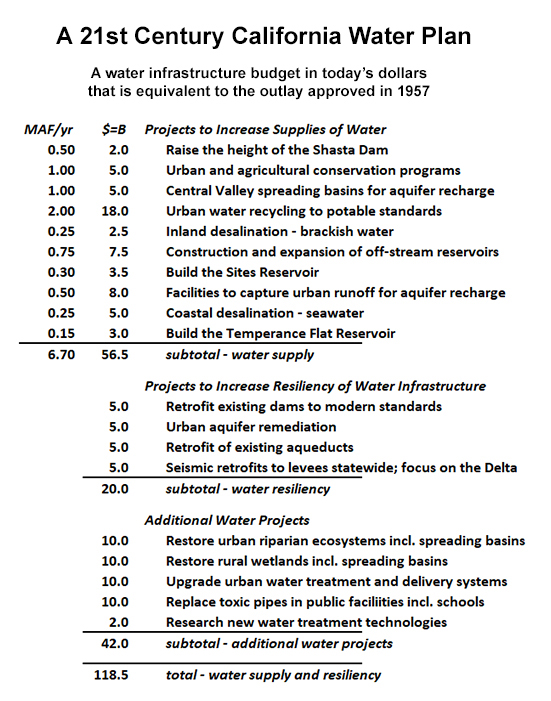 The total amount noted here, $118 billion, is not chosen by accident. The 1957 California Water Plan had a total estimated construction cost of $11.8 billion.  In early 2022 dollars, $11.8 billion is worth $118.5 billion. The state budget in 1957 was $1.9 billion, with capital outlay of $440 million, 23 percent of the entire budget. Through a combination of bonds and general fund allocations, back in 1957 the California state legislature resolved to spend an amount equal to six times their annual budget to build water infrastructure. Yet $118.5 billion is only 40 percent of today’s $286 billion state budget.

When evaluating the economics of water supply projects, the construction cost divided by the annual output (or “yield” in the case of a reservoir) is a useful ratio. For example, the projected cost to build the proposed Temperance Flat Reservoir divided by its expected annual yield is equal to $20,000 per acre foot, exactly the same as the cost/output ratio to build a desalination plant.

One may argue that Temperance Flat is on the extreme end of the cost equation – which by the way should not eliminate this critical south-of-the-delta reservoir opportunity from consideration – but desalination costs are also overstated.

For example, raising the height of the Shasta Dam is an extremely cost effective way to secure more water supply, at $4,000 of construction cost per acre foot of yield. But that cost-effectiveness is matched by desalination projects in Israel today that are not subject to California’s insane regulatory environment, protracted permitting process, needlessly inflated materials costs, and endless and very costly litigation. Desalination projects cost one-fifth as much to build per unit of capacity in Israel as they do in California, and as with all infrastructure in this state, most of the difference is the result of political choices.

Surprisingly, surveying various proposals for urban water recycling to potable standards yielded a range of costs much higher than anticipated. These costs, however, also displayed the widest range of variation, depending on every imaginable factor – differing topography, real estate values, labor costs, design standards, the local political and legal environment, and the character of the wastewater being treated. In general, expect construction costs for wastewater treatment to cost less than desalination in most cases, but not much less. The $18 billion cost cited above to treat 2.0 MAF/year is based on a proprietary study examining a statewide solution. It’s a lot of money, but worth every penny.

California’s average electricity consumption is 57 gigawatts. Very best case, to convert all end user energy to electric – transportation, heating, everything – would require California’s grid to expand its capacity to deliver on average just over 100 gigawatts. What about the energy needed to increase California’s water supply?

Using electricity to pump a million acre feet per year via the California aqueduct to Los Angeles consumes about 400 megawatts of continuous power, less about 100 megawatts that is recovered as the water flows back downhill into the Los Angeles Basin.

The energy cost to reuse wastewater is typically less than half that, i.e., about 150 megawatts of continuous power per million acre feet per year. In the case of desalination and wastewater reuse, energy is also required to deliver the water, but because these facilities are typically located near municipal groundwater basins or municipal water systems, the required delivery energy is unlikely to ever require more than half-again as much power, i.e., no more than 75 megawatts of continuous power per million acre feet per year; depending on the topography, potentially much less. Water pumped via aqueducts will typically develop enough pressure as it is pumped over the hills from inland sources and then piped downward into coastal cities to not require additional power for final delivery to consumers.

Providing general information on any specific water project is fraught with controversy. But the energy costs for new water can be easily debunked. If California’s politicians are committed to an electric age, the energy cost for more water is trivial compared to what’s going to be necessary to electrify the state’s residential, commercial, industrial and transportation sectors.

Critics of building more water infrastructure are also on thin ice when they claim it will cost too much money. Capital investments in water supply infrastructure yield long-term economic returns and greatly improve the quality of life for every resident. Spending $100 billion or more on these projects is well within the capacity of California’s economy to sustain. And at the risk of committing conservative heresy, putting $100 billion into the pockets of skilled construction workers will stimulate the economy in the short term, just as having all this new water will stimulate California’s economy in the long term. So channel some of those public education bucks into vocational training. We need the workers, and skills pay better than BAs.

If heavy and perennial rains return to California, spending $100 billion on these projects will ensure perpetual water abundance. But if rains don’t come back stronger than ever, spending this money will create secure climate resilience. Either way, it’s a win.