‘I have a deep attachment to the motherland, and my roots are in China.’ ~CalPERS Chief Investment Officer Yu Ben Meng

Rep. Jim Banks (R-IND) sent California Governor Gavin Newsom a letter this week (below) calling for the investigation of the Chief Investment Officer Yu Ben Meng of the California Public Employees’ Retirement System, the largest public pension fund in the nation, for his “long and cozy relationship with China.”

Rep. Banks joined “Mornings with Maria” on Fox Business to explain why he wrote the letter to California Gov. Gavin Newsom highlighting his concerns about the state public pension fund’s chief investment officer having ties to China.

“The fund has invested $3.1 billion in Chinese companies, some of which have been blacklisted by the U.S. government,” Banks told FOX Business’ Maria Bartiromo.

“If this were up to me, I would fire [CalPERS Chief Investment Officer Yu Ben Meng] immediately because of these suspicious ties,” he said. “We learned that Mr. Meng, who is the chief investment officer of CalPERS, was actually recruited to this position by the [Chinese Communist Party] through something called the Thousand Talents Program. Now he’s denied it.”

In addition to the $360 billion in assets, Rep. Banks said in his letter that CalPERS has a notable history of “shareholder activism.”

“What is unusual is that many of these companies are companies that we’ve blacklisted, that make Chinese military equipment or are responsible for technologies like Hikvision, which is the equipment that’s used by the Chinese for surveillance on the Uighur Muslim population that they’ve been abusing in their own country,” Banks said.

Banks attended the meeting earlier this week where Secretary of State Mike Pompeo warned “California’s investment fund is invested in companies that supply the People’s Liberation Army (PLA) that puts our soldiers, sailors, Airmen and Marines at risk.” In his letter to Gov. Newsom he said, “CalPERS 2018-2019 report confirms the Secretary’s statement.”

The Commerce Department blacklisted Hikvision in October “for engaging in or enabling activities contrary to the foreign policy interests of the United States.”

.@GovernorNewsom, please explain why someone recruited by a Chinese org described by FBI as a “non-traditional espionage” program is making investment decisions for CalPERS. Also US dollars should never be funding Chinese military or oppression of Uighurs!https://t.co/EkzF4cQMg4

@GovernorNewsom, please explain why someone recruited by a Chinese org described by FBI as a “non-traditional espionage” program is making investment decisions for CalPERS. Also US dollars should never be funding Chinese military or oppression of Uighurs! 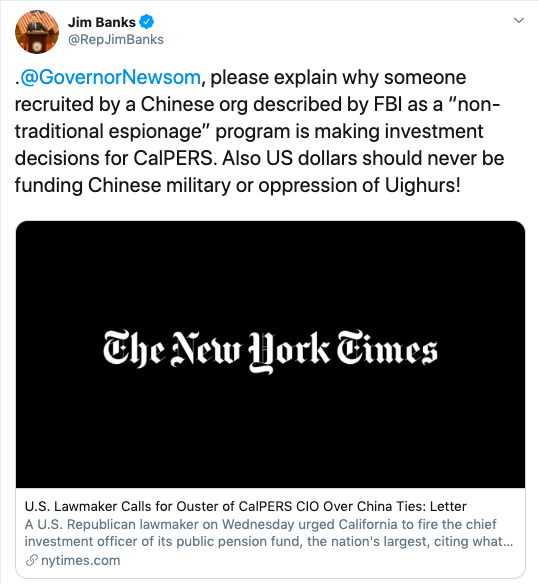 Banks told Bartiromo that they found Yu Ben Meng was actually recruited to the CIO position by the CCP through something called the Thousand Talents Program. Banks said they notified Gov. Newsom, who denied this. Banks also wondered why California would allow Yu Ben Meng to have access to the state’s public employee retirement funds. Banks also said they found Chinese newspaper articles which take credit for Yu Ben Meng being in the position at CalPERS.

Fox Business reported that CalPERS denied it invests in companies blacklisted by the federal Office of Foreign Asset Control. “CalPERS’ investments in Chinese public equity have decreased in recent years to just over one percent of the Fund,” the agency told FOX Business. “These are passive investments made through leading independent index providers. Institutional investors and public pension funds across America use index providers.”

CalPERS defended Meng, calling him a “globally-respected financial expert and a proud citizen of the United States.”

Banks wrote in the letter to the governor that Mr. Meng was hired as Deputy CIO of China’s State Admission of Foreign Exchange (SAFE) in 2015, which is a Chinese Communist Party Agency responsible for managing $3 trillion in state-owned assets.

In an article in the Chinese newspaper Society People, they write about Mr. Meng:

“He, once a well-known person on Wall Street in the United States, managed the largest public retirement fund in North America. Two years ago, he gave up the comfortable life in the United States and returned to contribute to the country’s foreign exchange reserves. He is Meng Yu, the deputy chief investment officer of the Central Foreign Exchange Business Center of the State Administration of Foreign Exchange (pictured above, profile photo).”

Mr. Meng said, “In human life, if there is an opportunity to serve the motherland, such responsibility and honor cannot be compared to anything.”

“Since 2001, Meng Yu has successively worked in many internationally renowned financial institutions such as Morgan Stanley, Lehman Brothers, and Barclays, and has successively held positions as bond trader, credit analyst, and investment director. In 2008, he joined the California Public Employees Retirement Management System, the largest public retirement fund in North America, where he was primarily responsible for asset allocation. Since 2011, Meng Yu has been the asset allocation director of the California public employee retirement management system, managing more than 300 billion US dollars of assets.”

“Outside of work, he also teaches courses in risk management, international finance and currency at the invitation of UC Berkeley and UC Davis.”

“We’re calling on Governor Newsom to do something about this,” Rep. Banks said. “If it were up to me, I’d fire him immediately because of these suspicious ties. While we finally have a President in the White House doing something about China, we have around the country a lot of left wing governors and government officials who are actually are doing more to entangle  us with China while the President is doing as much as he can to disentangle us.”

“I don’t even know if investors understand what they are buying,” Bartiromo said. “That’s another issue. And what’s the vetting process?”

Bartiromo said she reported on a similar story six months ago about the MSCI Index involving the 401(K)s of military men and women, past and present, and a proposal to have 10% of that fund or $50 billion mimicking the MSCI Index. The MSCI China A Index measures large and mid-cap representation across China securities listed on the Shanghai and Shenzhen exchanges.

“Governor Newsom, if it were up to me, I would fire Mr. Meng immediately,” Banks wrote in the letter to Gov. Newsom. “At the least, I think a thorough investigation of Mr. Meng’s relationship to the Chinese Communist Party and a comparison of CalPERS investments in Chinese companies before and after Mr. Meng’s 2008 hiring are both warranted.” 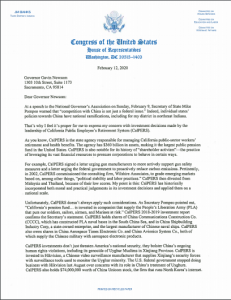 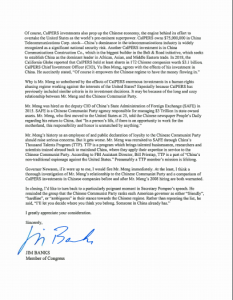