The Independent Women’s Network has organized a nationwide rally Monday for parents fed-up with their kids’ public schools and teachers unions which pushed to keep schools closed, forced kids into distance learning, and if they are back at school in-person, wearing masks all day.

But that’s just a small part of what’s at the root of parents’ anger at schools and unions.

Billed as a “Statewide School Walkout,” rally organizers say, “Keep your children home from school and meet us at the Capitol. Let’s rally together in unity as parents & grandparents choose medical freedom.”

“Are you angry that teachers unions kept schools closed for 18 months, yet blocked you from knowing what your child was learning in school… even while at home?

Are you fed up with government-run schools indoctrinating students with WOKE curricula like Critical Race Theory, graphic sexual content, and divisive, progressive ideology?

Are you tired of being called a TERRORIST because you want a say in your child’s education?

Do you want politicians to leave child-rearing to parents?”

The goal at the rally is to:

Defend parents’ rights and freedom to do what’s best for our children… and raise them as we see fit, with our own values and beliefs

Fight for our children’s future, which is shaped by their educational opportunities, experiences, and exposure during the earliest years in life

Call for education reform and the need to limit, not expand, the role of government in our education and early-life programs

Show the rising threat of expanded government-control, such as the inclusion of a government-takeover of child care in the social spending spree bill.

We know Rebecca Friedrichs of “For Kids and Country” and Friedrichs v. California Teachers’ Association, will be at Monday’s rally, along with many other speakers. 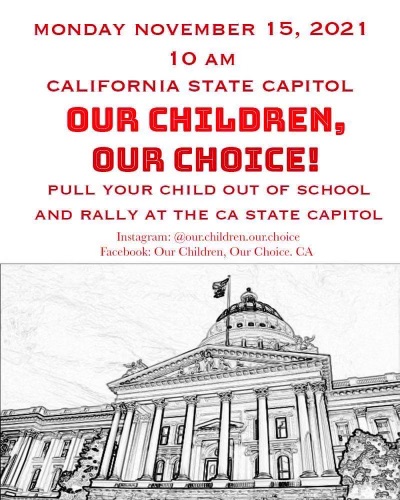 For more information about the Sacramento rally: