Home>Articles>Mayor and Governor Blame Gun Violence When 6 are Killed, 10 Injured in Downtown Sacramento Shooting
03 Apr 2022 10:21 am

Six people were killed and 10 were wounded in a mass shooting in downtown Sacramento late Saturday night/early Sunday, turning several blocks of the Capitol city into a massive crime scene, CBS 13 reported. Sacramento police spent the early hours of Sunday searching for the gunman.

“Rising gun violence is the scourge of our city, state and nation, and I support all actions to reduce it,” he said on Twitter.

Rising gun violence is the scourge of our city, state and nation, and I support all actions to reduce it. Our new Police Chief, Kathy Lester, has made it a top priority, and I stand firmly behind her. @SacPolice

If the driver of a Chevy Suburban ran down these 16 people, the media would report “SUV kills 6, injures 10.” Would Mayor Steinberg blame SUV violence?

Governor Gavin Newsom wasn’t any better: “Sadly, we once again mourn the lives lost and for those injured in yet another horrendous act of gun violence. Jennifer and I send our heartfelt condolences to the family, friends, and to the wider community impacted by this terrible tragedy.”

Sacramento District Attorney Anne Marie Schubert’s statement was more appropriate: “This is a shocking tragedy in our community. We are in contact with the Sacramento Police Department and monitoring the investigation closely. We will aggressively prosecute those responsible for these horrific crimes.”

The guns didn’t shoot 16 people, the perpetrators did, and I’m willing to bet this isn’t their first brush with the law. DA Anne Marie Schubert gets that, and plans on prosecuting them.

One astute Twitter follower said this in response to Steinberg’s statement: “There’s a reason violent crime & gun violence rises in the City of Sacramento but NOT the County. Sheriff don’t play & thugs know they can do whatever in Steinberg’s Sacramento. #BackTheBlue #StopSoftonCrimeLiberals.“

Another response pointed to soft-on-criminals policies: “Automatic weapons are already illegal, it’s called enforcement. Time to refund the traffic division as they were getting felons and illegal guns off the streets. Early release doesn’t appear to be working.”

“California has implemented an alarming cocktail of criminal justice ‘reforms’ that are likely to lead to a major crime wave into 2016,” I wrote in the chapter on crime in James Lacy‘s Taxifornia 2016, for which I interviewed Sacramento District Attorney Anne Marie Schubert. She was instrumental in providing confirmation about the rising crime rate in Sacramento and California. I wrote:

“In 2014, California voters were sold on reforming the state’s drug laws with Proposition 47. However, the measure covered more crimes than non-violent drug offenders. Moreover, drug addicts are likely to get less treatment in the state’s drug courts because prosecutors have lost a bargaining chip in the plea process. Add to it the court-ordered prisoner releases as a part of the state’s prison realignment under the 2011 AB 109 law, and you have a state ripe for a surge in crime; such as what is already underway in Oakland, which even after Jerry Brown’s eight years on-the-scene as Mayor, the FBI still considers one of the most dangerous cities in America.”

This violent mass murder was preventable: Allow police to police and enforce. Stop the early releases from prison. Repeal Proposition 47, passed by misinformed voters in 2014, flagrantly titled “The Safe Neighborhoods and Schools Act,” which decriminalized drug possession from a felony to a misdemeanor, removing law enforcement’s ability to make an arrest in most circumstances, as well as removing judges’ ability to order drug rehabilitation programs rather than incarceration. And perhaps the most obvious aspect of Prop. 47 on display today raised the theft threshold to $950 per location, per day, and bumped theft down to a misdemeanor from a felony.

How can any of these politicians claim their criminal justice “reforms” are successful, unless today’s violent crime and anarchy was always the end goal? The horrific crime scene in downtown Sacramento this Sunday morning is evidence. 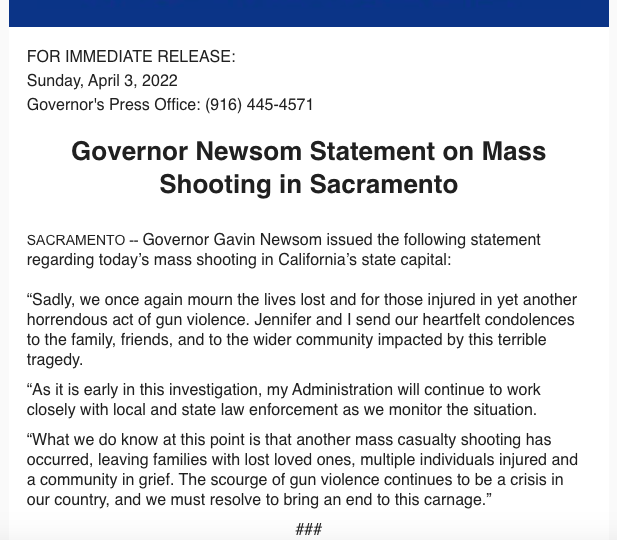 21 thoughts on “Mayor and Governor Blame Gun Violence When 6 are Killed, 10 Injured in Downtown Sacramento Shooting”