As we wrote last week, the California Sierra snowpack is already at 177% of normal, thanks to recent storms and the “Bomb Cyclone” hitting Northern California. Statewide, the average snow-water equivalent is 17.1 inches — 174% of the historical average.

California has been hit by several more storms – “bomb cyclones” – and it’s chaos in the Capitol City and Northern California. KCRA 3 reports, “Tens of thousands of people across Northern California are dealing with continued power outages on Monday, as heavy rain and strong winds caused issues on roadways but spared the region from widespread devastation.”

Winds gusted near 50 mph in the morning – not as bad as the 65 mph winds last week, but enough to keep most residents up all night worried about falling trees and limbs.

Of course, Gov. Newsom and his appointees call this “extreme weather” and the obvious result of “climate change.” Most know that even in California, this is winter weather, albeit a lot of winter weather at one concentrated time.

This is all part of an atmospheric river event that’s bringing more heavy rain and snow to the state and Sierra Nevada Mountains over the next week. Meteorologists say there are several more storms coming in the days and week ahead.

However, media and state officials can’t let a crisis go to waste and keep warning that we aren’t out of the drought yet – even with 20 inches of rain in only a couple of weeks. “While we see a terrific snowpack and that in and of itself is an opportunity to breathe a sigh of relief, we are by no means out of the woods when it comes to the drought,” Karla Nemeth, the state Department of Water Resources Director said last week.

What has made this storm event different is the amount of wind – 65 miles per hour registered at Sacramento International Airport.

Power outages have lasted days, and Sunday 350,000 Sacramento region residents were without power.

William Land Park, Sacramento’s large regional park within the city looks as if a cat 5 hurricane blasted through. The 9-hole gold course has lost so many trees, it isn’t playable at the moment. However, golfers are tickled to see some of their nemeses gone on certain holes.

And the State is still letting water out of our partially filled reservoirs. Folsom Lake is 47% of capacity, Oroville is 40%, Shasta is 37% and Nimbus is 82%. The state reservoirs are designed to hold and supply water to the state for last 7 years, but not if the state drains the reservoirs. 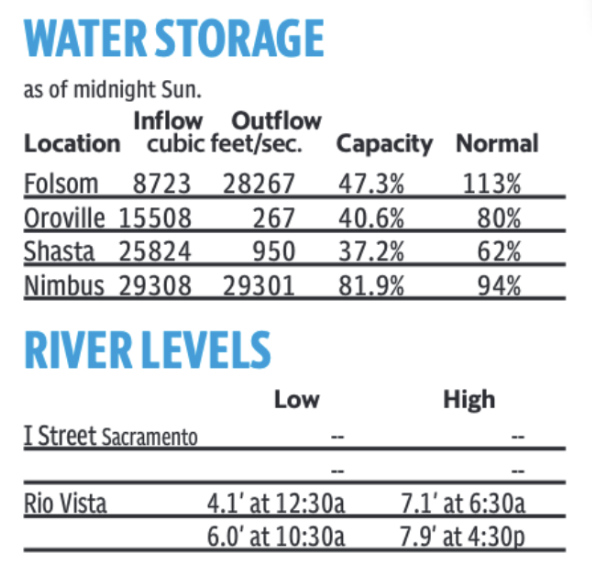 Wade Crowfoot, California Natural Resources Secretary, posted a video on Twitter with safety recommendations for dealing with the storms. But he also claimed “these atmospheric rivers are supercharged by climate change.”

A short message while I was surveying storm damage today in Sacramento.???????? I share 4 things that each of us can do to keep ourselves, families & communities safe… pic.twitter.com/BwoC3leY55

Only a couple of years ago California state bureaucrats were warning of global warming – despite that more crops are grown in warmer climates because scientists say increased carbon dioxide levels likely help vegetation to flourish; and there are far less cold weather-induced deaths.

We know that weather patterns change, sometimes for many years. We know there was an ice age. But as Copenhagen Consensus Centre President Bjorn Lomborg notes in a Twitter post, when telling stories of past climate change, almost the entire focus is on catastrophe, even though most cultures tackled their problems and were resilient. Lomborg, an environmentalist, says the reality is we are being “misled” on climate change because they want to “scare us” into spending “trillions of dollars.”

“In the long run we should find a way to avoid fossil fuels and find cheaper green energy, but we’re not there yet,” Mr Lomborg told Sky News host Andrew Bolt, Watts Up With That recently posted.

Lomborg also said while global warming is a real issue, scaring kids and adults witless isn’t good, nor is it fixing anything. Lomborg said the scare tactics are paving the way for forced reparations – a redistribution of wealth of trillions annually from wealthier individuals and countries to undeveloped countries – rich countries giving handouts to poorer developing countries.

Lomborg also says the only way developing countries will develop is not with handouts of cash, but with “lots and lots of fossil fuels – lots of cheap energy, just as we did.”

Instead, the Western World including the United States, led by California, is driving oil and gas energy right out of business without having a viable replacement. Lomborg says we need to ramp up the use of abundant energy sources while we further develop greener alternatives. And he is a nuclear power proponent.

Remember when all of the city buses advertised “Clean Natural Gas Powered?” I sure do.

Someone operating on YouTube under Metro Transit Archives even posted this 2008 video of a Sacramento Regional Transit Orion 07.501 Next Generation CNG #2832. The author notes 2832 is one of 100 Orion VII NGs purchased by Regional Transit in 2008.

Sacramento Regional Transit made a big deal out of the CNG buses, and they did indeed burn much cleaner.

Most of us accept that clean air solutions are ever evolving. And as Bjorn Lomborg says, there is climate change and the goal is to find cleaner fuels, but we aren’t there yet.

Calling our weather by dangerous sounding names to scare the people, and then claiming because of climate change we have these storms is just wicked.