The NO on Prop 16 campaign, which is working to prevent the return of racial and gender discrimination and preferences in California, recently highlighted on their Facebook page an egregious, racist comment made in 2014 by Democratic state Assemblywoman Cristina Garcia (D-Bell Gardens), about Asian Americans participating in the political process.

The Prop. 16 campaign contacted the California Globe about this. 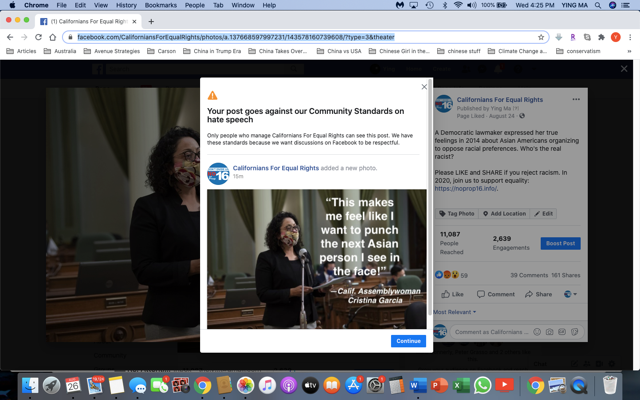 “There is no place in modern America for the type of racism exhibited by said state lawmaker, who is one of the primary champions of the restoration of racial preferences in California. There is also no good reason why Facebook should be labeling targets of racism as perpetrators of hate speech,” the campaign said.

“‘This makes me feel like I want to punch the next Asian person I see in the face,’ according to sources present at the meeting and other legislative sources who were told about the comments in the immediate aftermath,” Politico reported in 2018.

Prop. 16, if passed, would reverse the California Civil Rights Initiative, known as Proposition 209, which protects all Californians from discrimination. Prop. 209, passed by voters 55% to 45% in 1996, said that the state cannot discriminate against or grant preferential treatment on the basis of race, sex, color, ethnicity, or national origin in the operation of public employment, public education, and public contracting.

The NO on Prop 16 campaign objected to Facebook’s ruling, contacted Facebook, and Facebook reversed it. “With that said, the ubiquity of Facebook gives it enormous power. That power should not be used, even if unwittingly, to censor or silence ordinary Americans advocating for their political beliefs,” the campaign said.

“Perez confirmed to POLITICO that he had to ‘strongly admonish’ Garcia after she made comments against Asians in a closed-door Assembly Democratic Caucus meeting in 2014 — the same year in which she also acknowledged using homophobic slurs aimed at Perez, the first openly gay speaker of the California State Assembly.”

“Furthermore, the activism of first-generation, Asian American supporters of the NO on Prop 16 campaign is part of a broader, nationwide political awakening from this community on the issue of equal opportunity,” the campaign said. “The movement is remarkable and inspirational. We hope Facebook will ensure that it does not shut out their voices, even if real racists advocating for racial preferences threaten to punch them in the face.”

Repealing Proposition 209 would threaten the equal rights of all people in California, Izumi says.

As for Assemblywoman Garcia, the No on Prop. 16 campaign said it has not had a response from her.