Special to the California Globe by Lance Izumi and Michele Steeb

In his February State of the State speech, Governor Newsom declared homelessness his number one priority, and that he and the Legislature would come together on a major housing production bill.  However, the 2020 housing bills suffered the same fate as the 2019 housing counterparts when over 200 bills attempting to address the housing crisis were killed.

While the sinking of yet another housing bill is a slap in the Governor’s face, it is a sledge-hammer blow to the rapidly growing number of Californians struggling with homelessness– a number which has been woefully exacerbated by the COVID-19 pandemic.  It is also a blow for the state’s residents who declared homelessness their number one priority in 2019.

Housing First was initially rolled out by the Department of Housing and Urban Development (HUD) in 2011-13 as their one-size-fits-all solution to homelessness. Under this approach, healthcare services such as mental health and substance use disorder (SUD) services were formally divorced from housing to instead put a sole focus on the provision of housing.

As the pre-pandemic chart below illustrates, the number of people struggling with homelessness in the United States between 2007 and 2019 rose by 15.6%, in spite of a 200% increase in funding, from programs like Housing First, and in spite of the promise this approach would end homelessness in a decade. 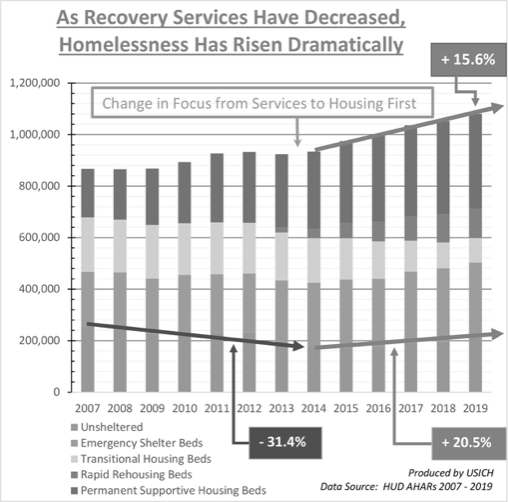 California experienced equally disastrous results under its 2016 roll-out of Housing First.  In 2019, Los Angeles homelessness was up 16% over 2017.  In San Francisco, it was up 18%, and in Sacramento, it increased by 19%.

Unbelievably that despite the fact that Housing First was clearly failing in California and throughout the United States, California’s elected leaders doubled down on Housing First in 2019, investing an additional $100M+ in taxpayer funding.

In the new book, Answers Behind the RED DOOR: Battling the Homeless Epidemic, Michele Steeb points to a recent study by the UCLA Policy Lab that shows upwards of 75% of the unsheltered homeless are struggling with mental illness or substance abuse disorder (SUD) issues.

Think about it this way:

Imagine walking into a doctor’s office and confiding that you struggle with an increasing dependency on alcohol or drugs. It is causing both health and personal problems—it is destroying relationships.

Imagine this physician examining you, only to determine that your liver is broken, but not to worry. She has the perfect cure. “I prescribe you…a permanent place to live.”

Last week, the United States Interagency Council on Homelessness (USICH) released a new plan to address homelessness. The plan recognizes the significant failures of Housing First as a one-size-fits-all approach. Instead, they propose a trauma-informed approach that re-couples such as mental health, substance abuse,  and employment training with housing.

California lawmakers must look in the mirror and follow USICH’s lead. Changing policies, however, often requires examining the policymakers, too. There is way too much recycling of those responsible for failed policies in California.

For example, when Sacramento County faced the decision of whether to adopt the Housing First policy, staff flew in an “expert” in October 2016 to influence the Supervisors – none other than the director of homeless initiatives in Los Angeles. This was a curious choice given the skyrocketing homeless population in Los Angeles.  Earlier this year, Los Angeles requested  Federal Government intervention in their homelessness crisis. If our policymakers were professional athletes, they would have been traded out seasons ago for losing every game.

Last year, Governor Newsom named one of his senior aides to act as his de facto housing czar.  This individual had previously served as an advisor to Newsom and other San Francisco mayors, which makes him an unserious choice for this position given San Francisco’s stunning homelessness failures.

It should be underscored that such observations are not intended as personal attacks on these individuals.  However, as a great political strategist once wisely observed, “Personnel is policy.”  When the task is to change a deeply embedded policy failure such as Housing First, moving around the deck chairs on the Titanic is not going to prevent a disaster.

It is time California seriously address the homelessness issue. The lives of many and the future of the state depend on it.

Lance Izumi is Senior Director of the Center for Education at the Pacific Research Institute. He has written and produced books, studies and films on a wide variety of education topics. Most recently, he is the author of the 2020 book A Kite in a Hurricane No More: The Journey of One Young Woman Who Overcame Learning Disabilities through Science and Educational Choice, The Corrupt Classroom in 2017, and the 2019 book Choosing Diversity: How Charter Schools Promote Diverse Learning Models and Meet the Diverse Needs of Parents and Children. 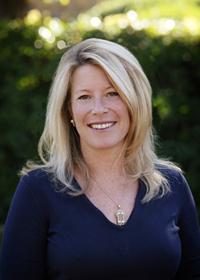 Follow me
Michele Steeb
Michele Steeb is the author of Answers Behind the Red Door: Battling the Homeless Epidemic. For over 12 years, Michele served as executive director of Saint John's Program for Real Change, a program for women and children struggling with the underlying causes of homelessness. You can follow her on Twitter @SteebMichele or reach her by email at michelesteeb@gmail.com.

Follow me
Latest posts by Michele Steeb (see all)
Spread the news: