Home>Articles>Race for CA Superintendent of Public Instruction is On For November
07 Jul 2022 3:47 pm

As of July 7, 2022, with 7 days to go for a final count, Lance Christensen made it in to the top two in the election for California Superintendent of Public Instruction against incumbent Tony Thurmond, who finished with less than 50% of the vote triggering a runoff in the non-partisan race.

Why is this interesting or relevant to your life? For starters, Lance Christensen is married and a father of 5, seventh-generation Californians, all school-age right now. He is a parent advocate, and was one of the primary architects of the recent school choice initiative that would have allowed parents to create education savings accounts for state funds to follow the student.

And Christensen’s supporters say he is a real reformer who will throw politics out of the office and bring back “education” to the Superintendent of Public Instruction position.

According to the California Secretary of State, Tony Thurmond currently has 2,872,094 votes, which is only 45.9% of the total votes – not enough to get him past the 50% mark to avoid the November election.

Lance Christensen has 742,400 votes, which is 11.9% of the total votes, and lands him in the second place slot, in California’s top-two Jungle Primary.

And that is even after California’s largest teachers union, the California Teachers Association (CTA), contributed $2.2 million to Thurmond’s campaign the final three weeks leading up to the June 7th Primary Election day. 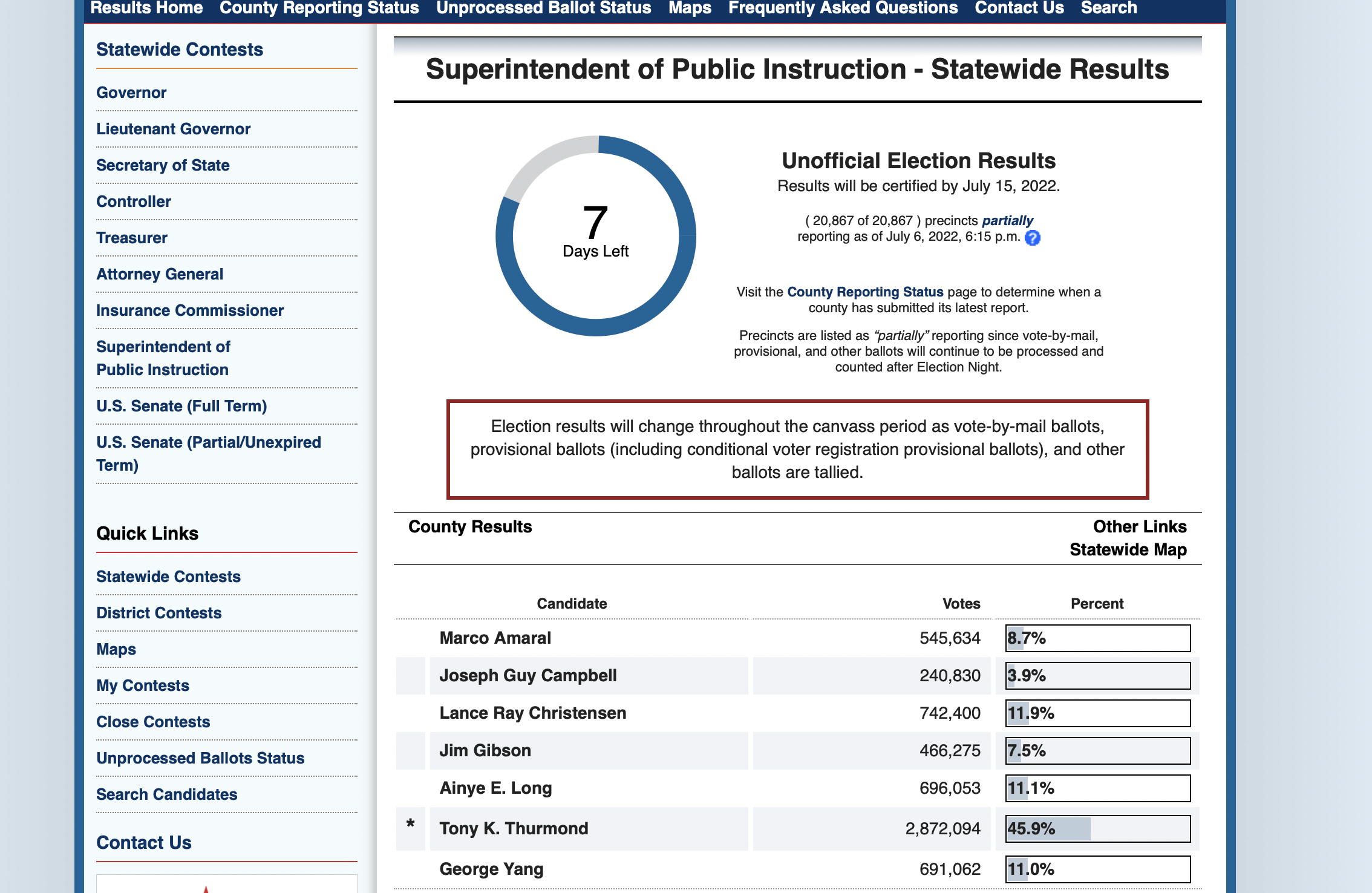 The Globe caught up with Lance Christensen recently and discussed his experience in the Primary, as well as the upcoming General Election.

Christensen spent less than $50,000 and was still elected as one of the top two, “because parents are out of their minds about education” in California right now.

He said when he first announced he would run for Superintendent of Public Instruction, it was so there was an actual choice for parents.

“Parents tell me ‘thank you for at least challenging him,'” Christensen said. He traveled all across the state and met with parents and parent groups in big cities and small towns, rural and urban.”That’s the only reason I’d win,” Christensen said. “Our kids would still be suffering without reasonable opposition.”

The Globe noted that Thurmond was totally silent throughout the school lockdowns, despite the obvious damage being done to the students. “We made our children prisoners in their bedrooms, with one phone call – Zoom,” Christensen said. “There is zero chance of children dying of COVID. It was all to protect the adults. It was never about the children.”

“You can’t hide behind your desk as securely as Thurmond did,” Christensen said. “I can’t think of one comforting statement he gave during the lockdown. He never even said ‘I understand about the emotional effects.'”

“The Superintendent of Public Instruction should be a leader who leads, is proactive, yet discreet and desires to keep parents, not special interests, at the top of his agenda,” Christensen recently wrote. Thurmond’s inability to protect and advocate for students or produce a single positive academic outcome over the last 3 and a half years in office — especially during the pandemic — disqualifies him from the job.”

So what are Christensen’s priorities?

Christensen says that upon assuming office as California State Superintendent of Public Instruction he will:

2. Direct staff to perform a “Kids First” audit of the California Department of Education (CDE) and its $100 million-plus budget appropriations and expenditures. Any positions or programming not explicitly authorized in statute or the 2022-23 budget’s legal citations and authorities will be reallocated or eliminated. I will propose any program that does not prioritize children’s education at the local education authority be omitted in future budget proposals. I will regularly be asking the legislature to have the funds follow the children with as little bureaucratic bloat as possible.

3. Reclassify an existing executive advisor within the Superintendent’s office as the Chief Parent Advocate and charge them with being the principal liaison on all issues and concerns brought to the office by parents.

4. Invite every school board trustee and district superintendent in the state to a town hall in Sacramento within the first month of my administration to discuss our respective constitutional authorities and responsibilities and where the State Superintendent’s office can appropriately defer or relinquish authority to local education officials under current law. We will find ways to simplify various educational processes to allow greater participation by local school districts and parents. Any agreements will be submitted to the legislature to change state law accordingly.

5. Assemble a Red Team Task Force to recommend substantive changes to the Education Code through a public process. As there is general agreement on statutory or constitutional changes to improve public education and protect parental authority, I would submit those proposals to the legislature or support ballot initiative measures going to the voter for their approval.

“If parents want their schools closed again, irrational regulations and mandates for classroom participation or a steady diet of inaccurate or divisive critical race theory, comprehensive sexual education or ‘math-is-racist’ curriculum, while test scores continue to be at the bottom of every major metric, then vote for the incumbent,” Christensen says.

“Otherwise, I see a time when a new Superintendent facilitates California parents and helps them do what’s best for their kids. That is why I am running for State Superintendent of Public Instruction.”

“Help add the parents to the education equation.”