If Sacramento Mayor Darrell Steinberg or any other member of the City Council committed the same crimes the transients are – assault, dealt drugs, committed robbery, masturbated in public, or pooped on the sidewalk in front of a business – they’d be arrested immediately and have the law thrown at them.

The City of Sacramento announced it is suing seven transients they claim are Sacramento residents, to ban them as a “public nuisance” in a downtown neighborhood. Rather than adopting a tough-on-crime policy, the city chose to sue penniless, homeless drugged-up vagrants. While more than 5,000 drugged up transients and vagrants terrorize businesses throughout the city, they’ve chosen seven to sue.

If the Sacramento Police Department is prohibited from locking these known individuals up at the moment of the crime, what will the lawsuit accomplish? Is it to appease the residents and businesses of the neighborhood in the lawsuit? Is it to make it appear the City is doing something about the drug-addicted transient population taking over downtown Sacramento?

How does the City of Sacramento file a lawsuit without the Mayor’s knowledge?

What is the end game? What are the solutions?

The video below was made by a Sacramento business owner who is closing her doors after 15 years because of the criminal transient population. She has endured multiple burglaries, transients camping and coming into her salon while she is working, and having to clean up urine, human feces and needles every day when she opens her doors. Her business, located near Broadway, is the area named in the lawsuit and is an area that has serious issues with drugs, theft and violence, and is a major drain on police resources. 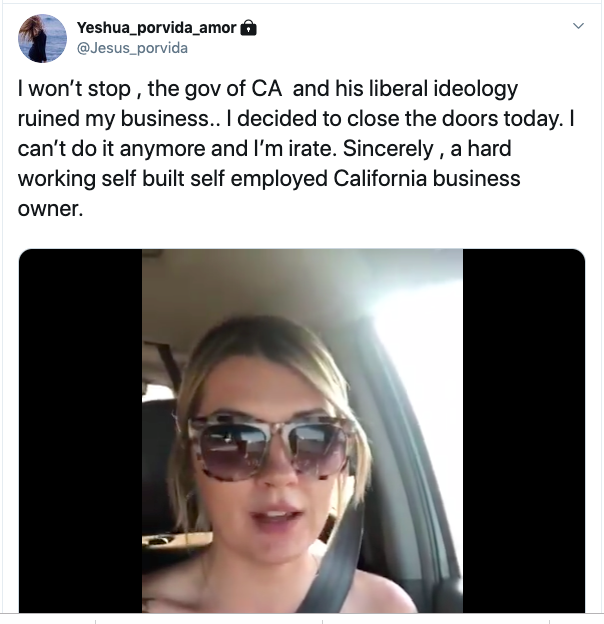 She had to make her Twitter page private because of trolls, but you can see her Tweet HERE.

She says while Gov. Gavin Newsom and the Mayor have turned California into a sanctuary state and are helping the homeless and illegal aliens, they are making it impossible for the hard working legal California residents to even function, while ignoring their health and safety.

“Civil Rights Advocates” claim the city and complaining residents and business owners are trampling on people’s rights. “This is a huge assault on civil liberties,” Sacramento civil rights attorney Mark Merin said, adding that he planned to reach out to the ACLU, National Lawyer’s Guild and civil libertarians to oppose the effort, the Sacramento Bee reported. “It’s just so shocking.”

However, Merin lost. In 2018 a “Sacramento Superior Court jury  decided that the city did not treat transients unfairly by enforcing its longtime ordinance prohibiting outdoor camping,” the Sacramento Bee reported. A juror in that case said the comparison between Best Buy campers waiting to shop and homeless men and women and their encampments was a stretch for jurors.

“But civil rights lawyer Mark Merin, who owned the property where the campers made their stand and represented them in court, vowed to fight on. He said he sees a legal path forward. ‘The tide has been turning regarding these types of cases in the federal courts,” with several rulings around the country in favor of homeless plaintiffs, he said. “We will be back, attacking the constitutionality of the ordinance itself.”

Merin says the new lawsuit is a dangerous precedent because it asks a court to criminalize homelessness and force homeless people out of a geographic area. But residents are fed up and want to know when the Governor and Mayor will start prioritizing and protecting them.

Several local residents say Merin and Steinberg are close friends, which may be why he is trying to distance himself from this lawsuit and this mess. However, this mess was created by former Senate President Darrell Steinberg and California Democrats in the State Legislature when they passed AB 109, and supported Propositions 47 and 57.

Proposition 47, titled The Safe Neighborhood and Schools Act, reduced a host of felonies to misdemeanors, including drug crimes, date rape, and all thefts under $950, even for repeat offenders who steal every day.

Gov. Jerry Brown’s A.B. 109 “realigned” California’s overcrowded prison system, shifting responsibility of repeat, newly classified “nonviolent” offenders from state prisons to county jails. Those released were assigned county probation officers rather than state parole officers. Many of those newly “non-violent” criminals let out of county jails due to overcrowding are living on California streets, on parkways, rivers, and canals, and using the streets as their toilets.

The City of Sacramento no longer enforces its own loitering and vagrancy ordinances instead of allowing police to arrest the vagrants and transients committing the crimes described above as: “assault, drug dealing, robbery and masturbating in public.” The city claims it is because of the Ninth Circuit Court of Appeals decision in a case brought by homeless plaintiffs in Boise, Idaho – the court ruled that cities cannot punish homeless people for sleeping outside if there is no place for them to go, or there are no shelter facilities available. The Ninth Circuit said it would be a form of cruel and unusual punishment, a violation of the Eighth Amendment to the Constitution.

Ignoring the crimes of homeless vagrants and transients is not part of the Ninth Circuit decision at all. Steinberg and “homeless advocates” are improperly using the decision to avoid dealing with the rampant crimes committed by the transient population.

The new lawsuit, filed last week in Sacramento Superior Court, says that an “excessive amount of police resources (are) being dedicated to the Designated Area” where residents and business owners “describe a high-crime area,” property values are threatened and “a sense of fear among citizens permeates the area.”

As one neighborhood advocate, says, “We’ve been documenting this for two years. The transient population is mostly drug addicts.”

4 thoughts on “Rather Than Tough-on-Crime Policies, Sacramento Sues 7 Transients For Harassing Businesses”