Home>Articles>Re-Open the Floodgates of American Energy to Prevent an Oil-pocalypse
31 Mar 2022 2:24 pm

With gas prices in California even higher than predicted in Will Smith’s 2007 zombie apocalypse I Am Legend, Democrats are poised for the electoral blowout of the century. Every poll favors Republicans, particularly on energy issues. And as Americans are suffering from the twin sins of Biden’s inflation and out of control gas prices, the RNC is registering people to vote at gas stations.

Regardless, Democrats have doubled down on their belief that fossil fuels are haram. Even though so-called progressives’ terrible energy policies presaged Putin’s invasion of Ukraine, many refuse to admit the damage their policies have caused. We have to hope that an election will teach them what even a war has not.

Which is, anthropogenic climate change is a not an existential threat to the planet, but cult-like devotion to it is.

The human race can ill-afford a world where the U.S. fails to lead, and energy is no exception. There’s an incumbency upon our leaders to leverage America’s abundant natural resources to provide stability and security for as much of the planet as possible. We have the resources to be the world’s leading natural gas and oil producer – probably just with oil from Alaska alone – but the government must be a partner in this endeavor rather than a relentless villain.

Biden has blocked all new federal leasing, canceled the Keystone Pipeline and other energy projects, stopped development in Alaska, proposed punitive taxes against domestic energy companies, and lied about how companies don’t need more federal leases because they have so many unused ones already. The administration would rather beg for help from OPEC, Venezuela, and Russia itself, strengthening their regimes, than budge on its carbon-free piety.

The Biden Administration and its (increasingly fewer) supporters must abandon its devotion to the false religion of climate change and do what’s right.

When it comes to shortages at home and bolder adversaries abroad, the administration has instead paraded a litany of claims for why green initiatives are more important than cash-strapped Americans or Ukrainian refugees. But those problems are only likely to get worse, as all the Biden Administration’s policies have killed the promise of future investment.

Transforming natural resources into easily dispensed fuel is expensive, long, difficult, and risky. Companies have to produce oil or gas on the land they’ve leased from the government or return them within 10 years – “use it or lose it.” Just determining if the underlying ground on leased land holds monetizable amounts of resources is arduous. Following that, the prospective company must make a huge down payment with a non-refundable bonus bid. Then, before the venture has yielded any revenue, the company must pay additional rent while wasting time and money to inure themselves against a plague of administrative and legal challenges.

Any argument about “unused” leases ignores these facts, sleight of hand for policies designed to sabotage one energy industry while enriching another one, or simply dogma from the climate cult.

And one of its high priestesses is California’s own Rep. Katie Porter – who “puts Orange County families first” … except when she doesn’t.

As chair of the Natural Resources Oversight Subcommittee, Porter has long opposed rational domestic energy policy. It is one thing to insist on appropriate regulatory and environmental guardrails; it is another thing to treat an essential industry as monsters.

Porter authored legislation to provide an exorbitant “decades-overdue update” to raise royalties, rental rates, inspection fees, and penalties on companies that convert resources from public lands into the fuel Americans and our trade partners use every day. She insists it’s unfair, “taxpayer welfare,” that the U.S. hasn’t raised the royalty rates energy companies pay for extraction, even though the fixed rate – 12.5 percent – means the government collects more money when gas is more expensive.

Porter was also a cosponsor of the disastrously misinformed Energy Innovation and Carbon Dividend Act, which would impose fees on the carbon content of crude oil, natural gas, and coal. This kind of policy, if given the weight of law, would drive gas prices up even more, further embolden bad actors like Putin, and rob normal Americans to subsidize expensive, so-called green energy industries.

Sabotaging American oil has only made people buy oil from Russia or elsewhere. Ukrainian flags on social media and other virtue-signaling trivialities won’t help anyone who’s been hurt by the Democrats’ bad energy policy so far, but pivoting back to Trump-era energy abundance will stop a World War III apocalypse before it starts. 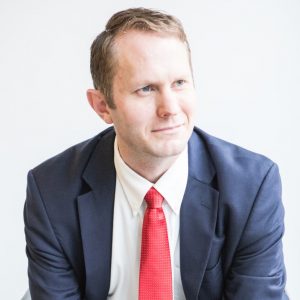 Jared Whitley
Jared Whitley worked in the US Senate and the White House. He has won myriad journalism awards, notably as best column writer from the Best of the West competition in 2016.

Latest posts by Jared Whitley (see all)
Spread the news: