California State Auditor Elaine Howle recently released a rather scathing audit of the management or mismanagement of Homelessness in California. She said that the state continues to have the largest homeless population in the nation “likely in part because its approach to addressing homelessness has been disjointed.”

In her cover letter to the Governor, President pro Tempore of the Senate, and Speaker of the Assembly, Howle said “At least nine state agencies administer and oversee 41 different programs that provide funding to mitigate homelessness, yet no single entity oversees the State’s efforts or is responsible for developing a statewide strategic plan.”

The state’s plan to mitigate homelessness is not designed to achieve this, as the audit shows. Because if the 9 agencies and 41 different programs were, they would no longer be needed, the federal and state funding would dry up, and public employee union jobs would be lost. In California, no program ever sunsets.

“The State continues to lack a comprehensive understanding of its spending to address homelessness, the specific services the programs provide, or the individuals who receive those services.”

Just the year before in 2018, a United Nations expert on housing singled out Oakland and San Francisco in a report as the only two U.S. cities which are part of a “global scandal,” saying the homeless encampments are “cruel and inhumane,” after visiting the Bay Area in January, KTVU Fox reported. In the same report the Special Rapporteur says “residents of informal settlements affirm humanity in the most inhumane circumstances. The Special Rapporteur has visited many informal settlements in the global North and South. She has found the severity of the living conditions and the failure of States to respond to them profoundly disturbing.”

California has spent $13 billion in just the last three years on the massive homelessness problem. The auditor said the approach to dealing with homelessness is so fragmented and incomplete it actually hinders efforts at getting people into stable housing.

“Last year, Newsom vetoed a bill that would have created a uniform data-collection system on homelessness spending, saying the measure was duplicative and would create additional and unnecessary data collection costs,” KCRA Channel 3 reported. However, the auditor found a lack of coordination between agencies, and largely, no accountability by any agency our the task force.

Some highlights from the audit:

“In September 2019, the Governor signed a package of 13 bills addressing homelessness, including Senate Bill 211, which authorizes the California Department of Transportation to lease certain property to local governments for temporary emergency shelters or feeding programs, and Senate Bill 450, which exempts certain hotels converted to supportive or transitional housing from the requirements of the California Environmental Quality Act until January 1, 2025,” the Auditor reported. “In January 2020, the Governor signed an executive order that focuses on preventing homelessness, providing shelter and services to people experiencing homelessness, and creating new temporary housing to reduce unsheltered homelessness. This executive order calls for, among other things, a multiagency state strike team to provide technical assistance and direct support to counties, cities, and public transit agencies seeking to bring people experiencing homelessness indoors and connect them with appropriate health, human, and social services.” 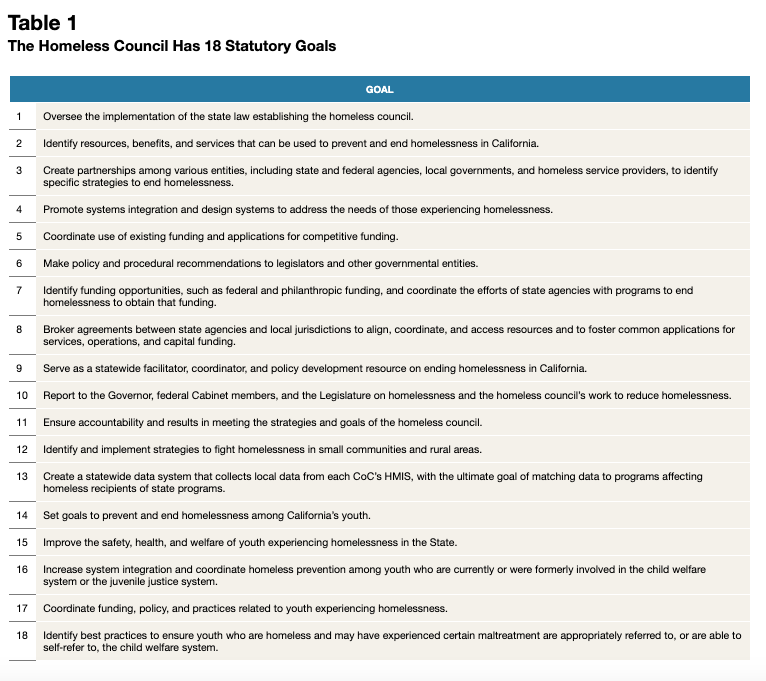 Homeless council staff claims they need many more staff positions to fulfill some of its most critical responsibilities, despite already having 24 staff positions available due to the Legislature appropriating an additional $1.5 million to add 10 more staff in fiscal year 2020–21, bringing its operating budget to about $3.4 million, to carry out its statutory mandates.

The state does not track the funding it provides to combat homelessness, which could be perhaps the biggest problem of all. “There is no single state entity that comprehensively tracks the sources of funding, the intended uses, or related expenditures for these programs,” nor does the state “track how much funding is available or spent toward addressing homelessness statewide.” 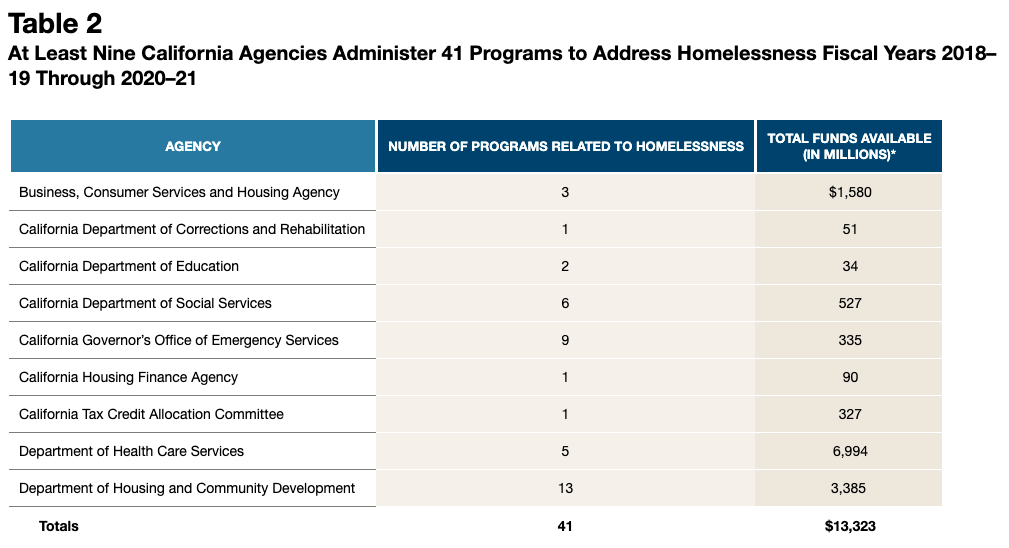 Additionally, “the homeless council has not prioritized coordination of existing funding and applications for competitive funding,” the auditor reported. “We believe that it [the Council] is well positioned to track the State’s sources of funding and spending on homelessness activities and make informed recommendations to decision makers to ensure proper coordination among different programs.”

The auditor said her office reviewed a number of other states which have charged a single agency with addressing homelessness statewide and tracking funding information centrally. “These other states have fared better than California in stemming the number of people who experience homelessness.”

The second part of the audit focused on the Continuum of Care organizations (CoCs), which “do not consistently employ best practices to improve homeless services in their areas.”

“The five CoCs we reviewed do not adequately conduct a comprehensive annual gaps analysis,” the Auditor reported. And two of the CoCs don’t even have current comprehensive plans. “Federal regulations require each CoC to have a plan in place to conduct an annual gaps analysis to determine whether the number and type of current services and service providers in its area are adequate to meet the needs of all the people it has identified as experiencing homelessness.”

Because of this, some homeless are struggling to access services because of gaps in the CoCs’ coordinated entry processes.

The Auditor makes a long list of recommendations, which frankly should already have been a priority for the county Continuum of Care organizations if they are truly focused on the goal of reducing homelessness by providing assessments and proper services for those they are tasked with helping. However, the audit does not state the obvious: if these five CoCs were to successfully reduce homelessness in California, they would work themselves out of jobs and the funding would dry up.

In California, state employment is a behemoth limitless jobs program, regardless of the mission of the state agency. And this is why only charities and non-profits unattached to government should be managing and helping the state’s homeless get assistance for a path to recovery.