“If necessary, we will call Bob Mueller or others before our committee. Our predominant concern on my committee is: Was this president, is this president, compromised by a foreign power?” That was House Intel Committee boss Adam Schiff after the Friday release of the Mueller report, still angling to hold up the dubious “collusion” story.

As his California constituents might have noted, that was similar to what the 28th District congressman has been saying for the last two years. In a March 24, 2017 Sacramento Bee commentary headlined, “Independent commission needed to investigate Russian hacking of our democracy, Schiff wrote:

“In 2015, Russian intelligence agencies penetrated the computers of political organizations, think tanks and other U.S. institutions in what looked like a foreign intelligence-gathering operation,” but “this is not the first time we were hacked by Russia.” This particular action was “so extraordinary” because “President Vladimir Putin decided to become an active participant in the U.S. election and attempt to influence its result for Donald Trump and against Hillary Clinton.” Further, “this is not idle speculation or the partisan characterization of ambiguous events – it is the consensus conclusion of all our intelligence agencies.” 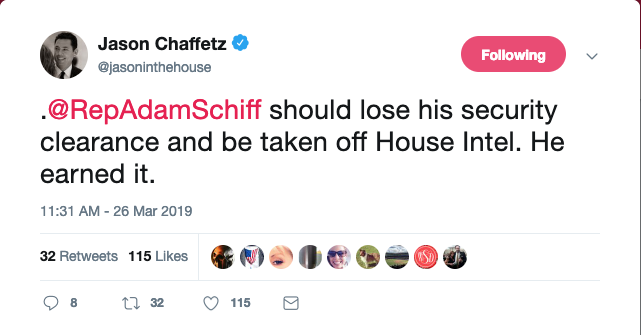 Schiff wondered, “when did the Russians decide to turn intelligence gathering into data weaponization, and why? What was the U.S. government response and how do we protect ourselves in the future? And did the Russians have the help of U.S. citizens in this compromise of our democracy, including people associated with the campaign they assisted?”

The California Democrat provided no evidence for any of the claims. Last August Schiff told CBS, “I think there’s plenty of evidence of collusion or conspiracy in plain sight,” and “As long as Russia interferes on Donald Trump’s side in the midterms, Vladimir Putin can count on the president not to call him out.” Schiff did not indicate where the evidence of collusion or conspiracy could be found.

After 675 days, $25 million, 19 lawyers, 40 FBI agents, 500 interviews, 2,800 subpoenas, and 500 search warrants, Special Counsel Mueller’s team of Democrat partisans found none of the “collusion or conspiracy,” and there would be no further indictments. That prompted no admission from Schiff that any of his statements had been false, misleading or premature. Indeed, his first response was to repeat his original charges and propose hauling special counsel Robert Mueller before his committee. For his constituents, and everybody in the country, this raises serious questions.

Adam Schiff is a Stanford grad who earned a JD from Harvard. As an attorney, Schiff knows that no judge would entertain a claim of evidence the attorney could not produce. Hearsay evidence is not admissible in court but Schiff is operating in a wider forum and from a more powerful platform.

The House Intelligence Committee handles the most sensitive information, vital secrets on which the nation’s security depends. That committee is now headed by a man who, as the Mueller report confirms, is a serial prevaricator whose vaunted evidence had an existential problem. That raises questions about Schiff’s qualifications to remain in the intel post, but at this writing House Speaker Nancy Pelosi has made no move to remove him. Puzzled Californians, and everybody else in the nation, might keep the back story in mind.

The previous administration deployed the nation’s counterintelligence forces to exonerate Hillary Clinton and frame candidate Donald Trump. When Trump won the election, these same forces launched the “insurance policy,” an attempted coup aimed at driving Trump from office, and as Schiff said last December, “the real prospect of jail time” for the president. As it happened, the fake collusion story ignored a key reality. 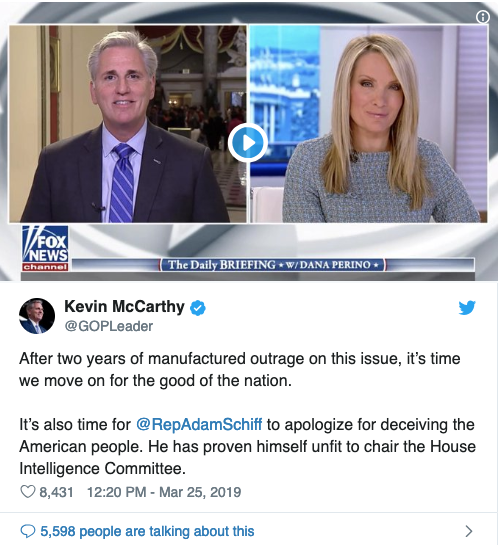 Russia had been intervening in U.S. elections since the 1920s by running candidates of their own party, the Communist Party USA. In 1976 the Russian Communists backed old-line Stalinist Gus Hall for President of the United States. College student John Brennan was one of the few Americans who voted for him. Even so, he went on to head the CIA and as the collusion hoax played out, Brennan accused President Trump of treason for meeting with Putin, and for revoking the security clearance of the former CIA boss and Gus Hall voter.

In 1979, African American Communist Angela Davis won the Lenin Peace Prize and the following year she ran for vice president on the Communist Party ticket with Gus Hall. The same pair ran again in 1984, at a time when the Russians were on the march in Africa, Central America and Afghanistan.

Even so, the federal government did not empower any special counsel to investigate Russian election meddling or the collusion of Angela Davis with an all-white Communist dictatorship. On January 21, 2017, one day after the inauguration of president Trump, the keynote speaker at a Washington anti-Trump rally was Angela Davis her own self.

Meanwhile, Sen. Lindsey Graham is calling for a special counsel to investigate “potential crimes” by officials in the Department of Justice and FBI. At this writing, no new special counsel has been named.