In 1986, 63 percent of California voters approved a ballot initiative called the “Safe Drinking Water and Toxic Enforcement Act” (California Health and Safety Code §25249.6.).  It promised to protect people from unsafe drinking water and, buried in the cumbersome title and fine print, also promised to require those doing business in California to “notify” them of exposure to chemicals a state agency would list as causing either cancer, reproductive harm, or both.  The list has grown to include over 900 chemicals.

Proposition 65 was written by a public interest lawyer who proposed something unique in environmental enforcement – companies who received violation notices under the law were immediately presumed guilty of a failure to warn of toxic chemicals until they proved otherwise.  To compound this, and something most voters likely did not realize, the law allowed not just the state, but private enforcers to serve violation notices and sue companies for the failure to warn and collect a share of penalties paid to the state, as well as all their claimed attorneys’ fees and costs.

What could go wrong?

Plenty.  The law has spawned a landscape littered with over warnings in California on everything from eyeglasses to supplements and protein powder to the brass handrails at Disneyland.  These warnings often do little but add yet one more warning to a product’s packaging and confuse or scare customers by having to list the presence of a chemical that is usually present well below one that can expose plaintiff to harmful levels, but requires the company spend thousands for experts to prove this.  For small companies this is not possible.  The Office of Environmental Health Hazard Assessment (OEHHA) is the state agency responsible for regulations interpreting the law and maintaining the list of chemicals which are deemed hazardous.  Unfortunately, its employees have no real-world experience, the agency has frequently appeared not up to the task, and it has produced results suggesting it regulates in a bubble regardless of the consequences.  In 2013, the governor acknowledged the “shakedown lawsuits” that all too often drive these Proposition 65 and asked OEHHA to look at reforming the regulations. 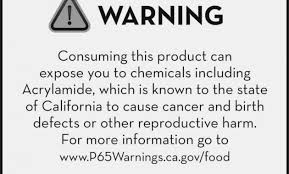 Despite the governor’s plea the regulations continue metastasizing resulting in costly and plaintiff-friendly regulations.  The agency’s safe harbor chemical levels below which no warnings are required, have led to nonsensical court rulings interpreting them.

This includes the recent 2018 disaster of a case where the judge found that Proposition 65 required cancer warnings on coffee due in large part to a miniscule safe harbor level OEHHA had set for the chemical acrylamide that was impossible to meet.  The FDA does not agree with OEHHA on this number and disagreed that coffee was a cause of cancer.  Still, after the trial judge found in favor of the plaintiff, OEHHA began scrambling to reverse the court decision by proposing a regulation that specifically states the chemicals in coffee do not cause cancer – all after coffee companies spent millions of dollars in defense and years in court.  This is not the way to regulate.

With all the unfairness and expense that comes baked into this law can anything be done to level the playing field?  Unfortunately the state legislature, while enacting some helpful tweaks to the law over the years, shows no appetite to seek wholesale reform to the law to make it fairer and address the sometimes excessive fees and costs claimed in these matters.  Moreover the law cannot be modified absent a two-thirds vote of the legislature.

If the legislature and governor want to reform the law they need to reform its governing agency OEHHA.  As the coffee case demonstrated, OEHHA’s decision making process is flawed.  OEHHA set a miniscule unrealistic safe harbor level for acrylamide and appears to have rejected business groups’ pleas.  And now it is considering a similarly unrealistic safe harbor level for the chemical lead.

If OEHHA establishes its proposed, lower safe harbor for lead, by far the chemical most targeted by private enforcers, it would result in thousands of products falling out of current compliance with the law, a wave of new violation notices followed by a sea of settlements with plaintiff’s lawyers receiving fat checks for forcing companies to settle and avoid further expense.

And reforming the attorney’s fee provision would make the most difference to the bottom line of a company settling.  The law provides that if the case is settled or if a verdict is returned for plaintiff the bounty hunter lawyer may seek his attorneys’ fees and costs.  The reality is that many bounty hunter lawyers do comparatively little work on these cases and usually utilize cookie-cutter forms and documents, and the vast majority of these matters are resolved early well before much work is done on the case.

These would be difficult lifts given it would take a two-thirds vote from the legislature that has shied away from any major reforms, and some of the members of which take contributions from the plaintiff lawyers’ bar.

Far from representing an environmental renaissance protecting the public in California, Proposition 65 is an expensive, unfair and largely ineffective failure that has mainly served to bleed businesses and make bounty hunters rich.  And, for now, there is no end in sight. 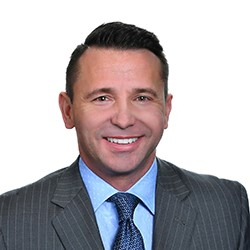 Dennis Raglin
Dennis E. Raglin is a Shareholder in Buchalter’s Los Angeles office, and Chair of the Chemical Law and Proposition 65 Group.He counsels and defends companies large and small on California’s Proposition 65, as well as state and national chemical law compliance generally.

Latest posts by Dennis Raglin (see all)
Spread the news: